How did a historic building end up hidden on a Saint John walking trail?

Weirdly, it's not the only historic building stashed in the woods in Saint John.

The stone carvings at Sheldon Point have mystified hikers for years

Sheldon Point, with its scenic trails, rocky cliffs and panoramic views of Saint John Harbour, is a popular stop for hikers on their way to the Irving Nature Park.

But there's something unusual hidden in the tall grass and alder bushes off Sand Cove Road.

Hiker Sandy Stewart-Giddings, who lives in Quispamsis, first stumbled across the stone carvings at Sheldon Point in 2018.

"As I was walking along the trail, out of the corner of my eye, I saw this big gargoyle head," Stewart-Giddings said.

"There were all these beautiful stones just tossed around."

Some are elaborately carved with roses, lilies and sunflowers. There are delicately carved arches and bench-like slabs big enough to seat two people.

"I was so curious," she said. "What is this all about? What is the history here? It was really intriguing."

"It's just beautiful craftsmanship that you don't see a lot of today."

The stones are "a piece of our glorious 19th-century Saint John history that has disappeared," according to Saint Johner Keith Dow.

The stones belonged to Customs House, one of the grandest buildings to emerge from the ashes of the Great Fire of 1877.

Built by architects McKean and Fairweather at a cost of $160,000, it dominated the Saint John harbourfront between Prince William and Water streets. 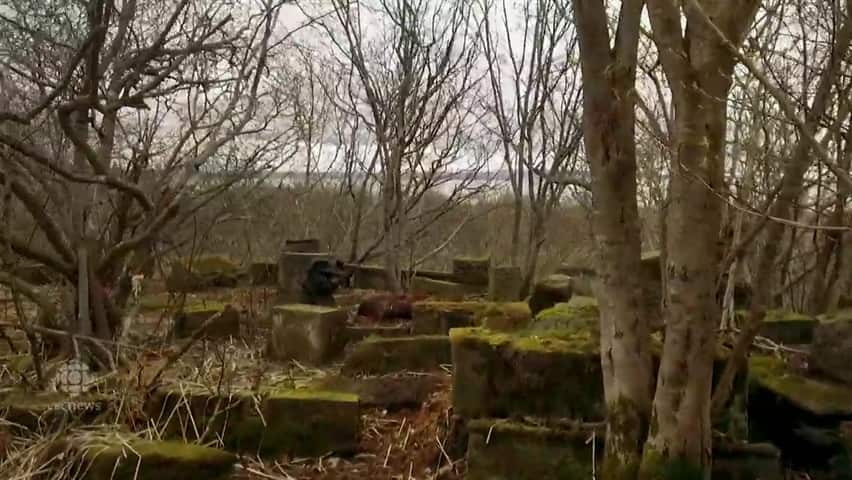 2 years agoVideo
2:02
Saint John hikers have wondered for years what's hidden in this popular trail. What we discovered teaches a hard history lesson, and how we should be doing more to preserve it. 2:02

At a time when Saint John was still a major port, the staff at Customs House were responsible for collecting revenues from customs imports.

The building was decorated with "a group of carved heads, linked with intricate scrollwork," the Saint John Evening Times-Globe reported on May 13, 1960.

"The sculptor was James McAvity, who carved the figure of Britannia at the Legislative Building and on the coat-of-arms at City Hall, at Fredericton."

Customs House also featured "corbels and arches from the front elevation in floral patterns, simply decorated, and skilfully carved," according to curator Gary Hughes of the New Brunswick Museum.

Dow, who attended Saint John High School from 1953 to 1955, recalls "sitting on the row next to the windows, and paying more attention to the Customs House than my geometry class."

"I was mesmerized by that gorgeous, gorgeous 19th-century building."

But by the 1960s, Customs House was falling into disrepair.

A fire in 1893 had left the sandstone porous and prone to crumbling, and traffic in the Port of Saint John itself was in decline.

Rather than maintain the building, the federal Department of Public Works demolished it.

"There was really just a fledgling heritage preservation movement at that time," said Gary Hughes, who included Customs House in his 1992 book Music of the Eye: Architectural Drawings of Canada's First City 1822-1914.

"I think a lot of people just thought, 'We want new.'"

The demolition of such an important building, in Dow's view, offers a "hard lesson" about the importance of heritage preservation in Saint John.

"We tear it down and put something new up," he said.

"Change is always part of our culture. But there are some things which in my view should not change — that we should protect, honour and respect."

It was Dow's father-in-law, well-known Saint John contractor George Chittick, who got the contract for the demolition.

"The masonry will be used as fill along the harbourfront," the Times-Globe reported on May 13, 1960. "The contractor has his own uses for the rest of it."

"I thought it was a sacrilege," Dow said.

It took two months to tear the building down. Some of the rubble was used to shore up the bank of the Chittick family property, where the walking trails are today, against erosion.

But Chittick preserved the stone carvings by storing many of them on his land.

In 2016, several of the larger stone carvings were donated to the New Brunswick Museum, a process that required many hours and the use of a lift truck. Others remain in Saint John in private hands.

"We were so pleased to be able to conserve and keep a few of them," said Hughes.

In 2019, a parking lot occupies the site where Customs House once stood. A plaque near the bottom of Princess Street commemorates its existence.

"Were the building here today," Hughes said, "I don't think it would have been meeting the wrecking ball."

Strangely, Customs House isn't the only historic Saint John building to end up stashed in pieces in the woods.

Less that 10 kilometres away from Sheldon Point on Sandy Point Road,  the remains of the old Saint John jail, built in 1865, are still piled in a scrubland that used to be the Howe's Lake Dump. They've been there since the building was demolished in the 1980s.

Most of the remaining pieces of Customs House are visible on the side of the trail, about a kilometre behind the green-roofed barn at 1379 Sand Cove Road. .

But it's possible that there are more mysteries hidden in the woods.

"There may be more pieces we don't know about," Hughes said.