'Don't cry mother, we are coming back:' Fallen WWI soldier laid to rest

Sgt. Harold Wilfred Shaughnessy of St. Stephen did not have time for breakfast when he left for the war in Europe on March 29, 1916.

Sgt. Harold Wilfred Shaughnessy of St. Stephen, N.B., did not have time for breakfast when he left for the war in Europe on March 29, 1916.

In a letter to his sister, dated April 20 of that year, he remembered seeing the streets of Montreal lined with people.

At the station, his friends all stood in one place, so he could see them and shake their hands as the train pulled away. An elderly woman handed him a big flag.

When he saw another woman cry, he hollered "Don't cry mother, we are coming back."

But Shaughnessy did not come back.

He was killed a year later, on Aug. 15, 1917, in the Battle of Hill 70, the first major action fought by the Canadian Corps under a Canadian commander in the First World War.

Shaughnessy was 33 when he was presumed missing and killed in battle.

It took almost 100 years before his remains were discovered near the village of Vendin-le-Vieil, France, during munitions-clearing work in advance of a construction project on June 6, 2016.

On Thursday, Shaughnessy received a full military burial at Loos British Cemetery outside Loos-en-Gohelle, a small community in France, not far from the Belgian border.

An educated man and soldier

When amateur historian Darren McCabe heard about the discovery of the remains in France, his interest was piqued.

A St. Stephen native, McCabe soon discovered that Shaughnessy was born in the southern New Brunswick town in 1884. 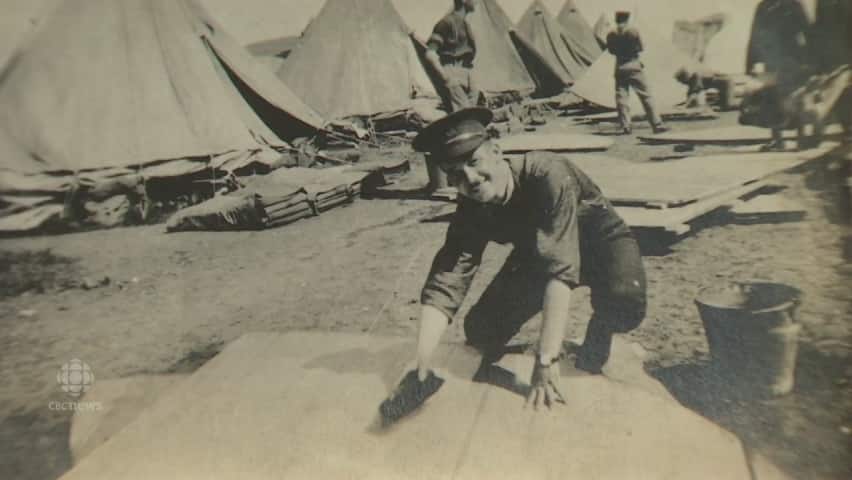 He came from a wealthy background, McCabe said. His father was a customs officer and the family was the sole supplier of sawmill equipment in the area.

"He graduated from McGill University, he was considered an educated man, and he attained the rank of sergeant fairly quickly," said McCabe.

The military "looked at him properly for strong leadership potential and he probably, if he had lived, would have been given his officer commission fairly quickly, but unfortunately he didn't make it through the battle of Hill 70."

Shaughnessy was a stenographer before enlisting in Montreal on Aug. 4, 1915, as a member of the 13th Canadian Infantry Battalion of the Canadian Expeditionary Force. The battalion was formed by the Montreal-based Black Watch (Royal Highland Regiment) of Canada.

When he died in the Battle of Hill 70, a crucial and bloody battle fought within sight of, and just days after, Vimy Ridge, his body was likely buried in a bomb crater or covered by his fellow soldiers, said McCabe.

"They would shovel dirt over them and move on, just to not expose the war dead," he said. "If you think about that process, as unfortunate as it is, you can see how a lot of the soldiers would have gone missing."

Shaughnessy was not married, according to his personnel file, but he had two sisters and a brother, who joined the war before him.

No one from the Shaughnessy family lives in St. Stephen today.

They are so thankful for Canadians caring still, to this day, about a relative of theirs that died a hundred years ago.-  Darren McCabe, amateur historian

But McCabe said he was able to contact some distant relatives, including a nephew, Jack Kennedy, who read his great-uncle's letter at his funeral on Thursday.

"They are so thankful for Canadians caring still, to this day, about a relative of theirs that died a hundred years ago," McCabe said, adding the family members, many of whom have never even met, are planning to gather in St. Stephen this fall.

The town has purchased a memorial banner for Shaughnessy, which it will place across from its cenotaph this fall during the Remembrance Day ceremony.

"So we're going to do our best to remember him too," McCabe said.

Thursday's funeral was also an emotional ending to Shaughnessy's story for the forensic anthropologist who studied his remains.

Sarah Lockyer, casualty identification co-ordinator with the Department of National Defence, said this was the first case she's worked on from beginning to end.

But Shaughnessy's case was "quite special" for other reasons too, the Moncton woman said.

Lockyer said Shaughnessy's remains were mostly complete and in good condition when they were discovered.

It helped that he carried several pieces of equipment and personal items with him, including an identification disk, a signet gold ring with his initials, a collapsible metal cup, a toothbrush and a razor.

Lockyer said the items have been handed over to remaining family.

I see it as returning an identity. I'm returning a name to these individuals who made the ultimate sacrifice for our country.- Sarah Lockyer, casualty identification co-ordinator

Along with the historical context of his location, the items were important to discovering his identity, and finally laying him to rest, she said.

"I see it as returning an identity. I'm returning a name to these individuals who made the ultimate sacrifice for our country and unfortunately, in the fog of war, went missing and had no known grave."

Lockyer said her job often requires her to remain objective and to not let emotions get in the way.

But when she finally met Shaughnessy's family this week, she said it was an emotional experience.

"When you can get to the final part of the process, participate in the burial, see what it means to the family ... that was quite a touching moment," she said. "There were a few tears that were shed."

In an emotional eulogy to his great-uncle, Jack Kennedy read the century-old letter his uncle had penned to his sister in 1916.

In the letter, Shaughnessy remembered how he stood still on the platform of his train as it left Montreal.

He wrote that he looked up and saw Mount Royal, then said to himself, "when will I ever see it again?"

Viola Pruss is a reporter and web writer for CBC New Brunswick. She grew up in Germany and immigrated to Canada in 2008.