The New Brunswick government is proposing 116 different changes to the regulatory framework that oversees the oil and gas industry and in particular the controversial process of hydraulic fracturing.

Citizens have until July 18 to submit comments 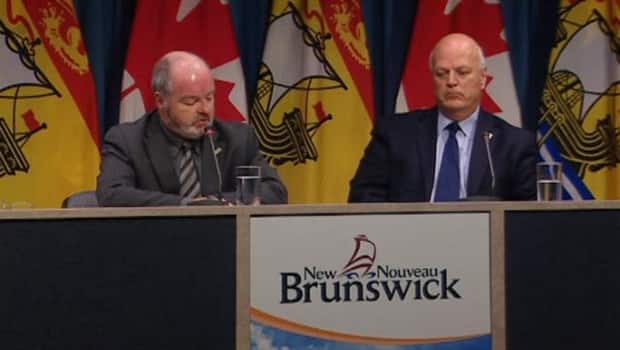 9 years agoVideo
2:12
The New Brunswick government is proposing 116 different changes to the regulatory framework that oversees the oil and gas industry and in particular the controversial process of hydraulic fracturing 2:12

The New Brunswick government is proposing 116 different changes to the regulatory framework that oversees the oil and gas industry and in particular the controversial process of hydraulic fracturing.

Natural Resources Minister Bruce Northrup and Environment Minister Bruce Fitch unveiled the changes to the rules governing the oil and gas industry in the legislative assembly on Thursday.

The new changes include overhauling the royalty framework that would ensure more money flows into the provincial coffers and is sent to property owners and communities where mining activity is taking place.

The new provincial regulations will set out strict rules on protecting the environment.

Natural gas companies will also be subject to higher fines if they break the rules.

The province’s natural gas study group described many of the changes as "leading edge environmental standards for oil and gas activities."

Northrup said the provincial government has time to get the regulatory framework in place.

"Not a lot of activity will take place this year and to my knowledge there will be no fracking done in the province this year," Northrup told reporters on Thursday.

"We are going at a pace that is just right for the activity in the province."

The provincial government is opening up the proposed changes for public debate. Citizens have until July 18 to submit their comments.

Northrup said he’d like the rules to be in place for 2013.

The provincial government will hold a public engagement tour in June to discuss the proposals and the revenue-sharing structure.

"We recognize New Brunswickers care about the environment and how it relates to the oil and gas industry. And we know how people have concerns about the extraction of natural gas from shale," he said.

The natural resources minister said the plan "addresses these concerns."

Along with the mandatory pre- and post-seismic testing and drilling provisions that were announced last year, the provincial government will establish a series of additional surface water and groundwater monitoring requirements.

Fitch also emphasized the testing standards being laid out by the provincial government.

"Not one hole will be drilled without a thorough review from my department of environment," he said.

Some of the other new rules include, creating a hierarchy of water sources that would be used in the hydraulic fracturing process. Instead of using fresh water, Fitch said, they would look first at using waste water.

Fitch also said there would be no open pits for handling drilling fluids.

Instead, the environment minister said companies would be required to use closed-loop systems to contain the potentially harmful fluids.

While it was not part of the announcement on Thursday, the Department of Health is in the process of setting up an analysis that would assess the health impact of shale gas development.

Under the proposed plan, the royalty regime would climb to 40 per cent.

The traditional 10 per cent royalty will remain, but a new economic profit royalty would be added.

Companies would be required to send over 40 per cent of the profits made by companies to the government.

The provincial government would then enter into a profit-sharing agreement with local landowners and companies.

Landowners who host wells on their property could receive 0.5 per cent of that royalty.

Further, municipalities and local service districts within a 25-kilometre radius would be eligible for two per cent of the royalty.

The funds for communities and landowners will come out of the 40-per-cent profit royalty.

A provincial official suggested that other royalty structures are in a similar range as those planned in New Brunswick.

Angie Leonard, a spokesperson for the Canadian Association of Petroleum Producers, said the industry will need more time to look at the proposed regulations.

But Leonard applauded the provincial government for clarifying rules surrounding the oil and gas industry in the province.

She also said it is too early to tell whether the 40 per cent royalty on profits will deter companies from developing in New Brunswick.

The existing penalties for companies that violate any of the laws governing the oil and gas industry range from $640 to $10,400.

But the provincial government is going to hike those penalties as high as $1 million.

Another change is the provincial government is going to take more control over levying the fines.

The Department of Natural Resources would be empowered to impose the penalties, instead of relying on charges to be laid in court and the fines being ordered by a judge.

Northrup said the existing system is "too slow and not a good use of court time."

The provincial government found itself in a difficult situation last year when Windsor Energy began seismic testing in Sussex before it received permission from the town council.

Northrup forwarded a complaint to the RCMP, but no charges were laid.

Windsor Energy could have been fined as much as $5,200.

Now, the provincial government could levy as much as $500,000 for a company breaking the same rule.

Northrup said the "grey area" that was exposed during the Windsor Energy controversy is now gone.

"I feel very, very confident that from here on in we will be able to act on that situation on that day or the next day as far as imposing fines or hauling back the licences," he said.

The two cabinet ministers say there are enough provincial officials working for the government to enforce these new rules and impose the fines.

The environment minister said there are about 30 inspectors in his department that monitor these companies.

"As things develop, if the industry grows, then we will make sure we have the people on the ground," he said.

Premier David Alward previously said he wants the province to have the strongest shale gas exploration regulations on the continent.

The premier has also said the shale gas industry could provide huge economic benefits for the province, which is struggling with a deficit of $183 million and high unemployment.

Alward has promised, however, that those economic benefits won't come at the expense of the environment.

The provincial government has faced mounting criticism in the last year over shale gas exploration and the use of the controversial hydraulic fracturing process.

Opponents of the process say it could have a negative effect on local water supplies and many of them have held protests across the province.

The Opposition Liberals, environmental groups, the New  Brunswick College of Family Physicians and some municipal governments have called for a moratorium on shale gas activities in the province.

Four scientists at the University of New Brunswick also recently raised concerns about the amount of fresh water for hydro-fracking and the treatment needed for waste water.