About 400 people gathered at Mount Allison University on Thursday to demand change after hundreds of students, past and present, shared their stories of assault.

About 400 people gathered at Mount Allison University on Thursday to demand change after hundreds of students, past and present, shared their stories of assault.

"I was sexually harassed at a party and ended up with a physical altercation," she said of the assault that took place in 2016 when she was a first-year student. "The incident deeply concerned me and it deeply upset me."

She said she and other women who were assaulted by the same man went to the administration as a group, hoping something could be done.

She said "fear tactics" were used to persuade most of the women to not file an official complaint that would be recorded and require action.

Ultimately, Roy said, there were no consequences for the abuser.

"So this incident really shook me up."

She became an activist, joining committees and writing articles in the student newspaper. 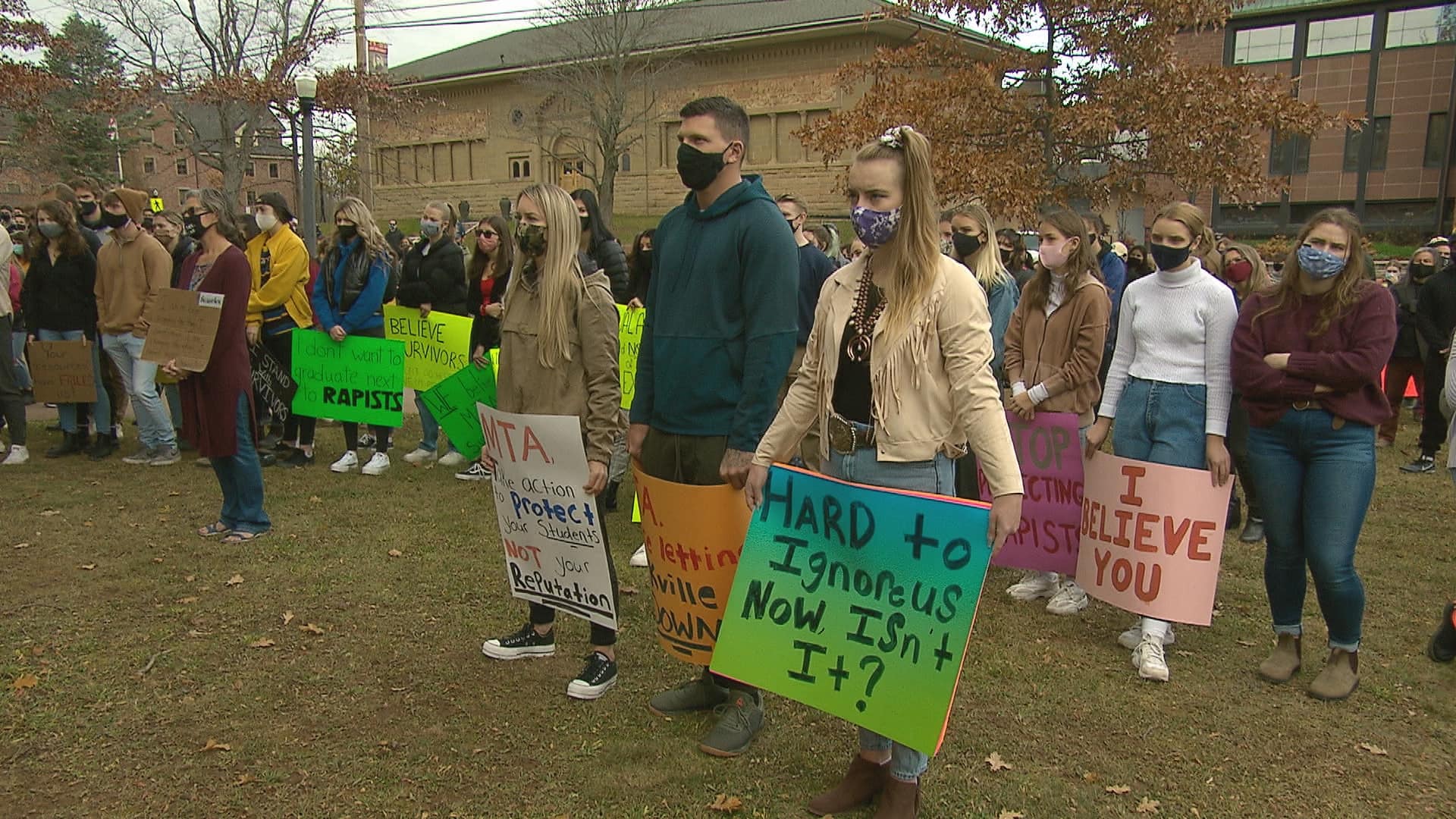 Hundreds of people protest against sexual violence at Mount A

2 months agoVideo
2:10
Student Michelle Roy prompted a flurry of activity on social media when she accused the university in Sackville of supporting rapists and silencing victims. 2:10

But change was slow to come until her recent post went viral, receiving thousands of shares and garnering more than 300 personal stories of sexual violence on campus.

"I think the university had no choice but to listen," said Roy.

She organized the protest because she said so many people seemed to want to get involved.

"I'm pretty happy with the turnout. I didn't think anybody was going to show up."

A show of support

Nathan Robichaud, a third-year student at the university, said he was there because he has friends who have been sexually assaulted on campus by fellow students.

"I think it's really  important that we as guys come out and show support for women who are overwhelmingly victims," he said.

"It's really the least we can do as guys is just show up and be here."

Deavan Chapman, who lives in nearby Amherst, isn't a student but travels to Sackville often to attend parties.

"This is so important to me, I know so many survivors," said Chapman.

"I would hate to not be here."

The local Green Party MLA, Megan Mitton, was in the crowd, also showing her support. She said she'd read many of the hundreds of stories Roy posted anonymously on her social media page.

Mitton said that while sexual assault isn't new to campus, the approach taken to end it and the support for victims needs to change.

"It's something that needs to be tackled aggressively because this needs to stop and we can no longer accept that people will just get sexually assaulted when they go to university or in our communities," said Mitton.

"We need to ensure that, on a provincial level, there is a framework for action, for preventing and responding to sexual violence in New Brunswick."

An action plan was released on Thursday that Boudreau said the university is committed to following.

Counsellors from Crossroads for Women, based in Moncton, were brought in the same morning as the protest to speak to anyone in need of support.

The organization will be taking over victim services on campus for the time being.

Boudreau said a working group will be established to prevent sexual violence at the university.

And, there will be a third-party review of existing policies and procedures.

For years, Mount Allison had one part-time employee responsible for dealing with sexual assault services. The university has said since 2015 it was considering expanding the role to full-time. It had not done that until now.

The action plan includes the addition of a full-time position "to lead sexual violence prevention and survivor support services at Mount Allison."

Boudreau said the new person would be recruited by the end of the month.

Michelle Roy said the university's early moves are a step toward building trust.

She said people attended the protest from Halifax and Fredericton, which shows sexual violence is an issue on other  campuses.

If Mount Allison goes through with its plans, Roy said, there is the potential for the school to be a leader in dealing with and preventing assaults.

Even though most university students are technically adults, they still deserve protection, she said.

"They have dreams and they have passions and they think that the post-secondary education is going to help them with that," said Roy.

"Instead, they walk into somewhere where they're going to be victimized and traumatized."