New Brunswick Senator John Wallace has resigned from the federal Conservative caucus, citing the idea that the appointed upper chamber is supposed to operate independently.

New Brunswick Senator John Wallace has resigned from the federal Conservative caucus, citing irreconcilable differences between him and his caucus colleagues.

Wallace, who was appointed to the Senate in 2008 by former prime minister Stephen Harper, will remain in the Senate and sit as an Independent.

"These differences are fundamental to the roles and responsibilities that I have sworn to uphold as a member of the Senate of Canada."

Wallace cited the 2014 decision by the Supreme Court of Canada in a reference case on Senate reform.

He said the Fathers of Confederation wanted the Senate to be "thoroughly independent" so it could "dispassionately" examine bills free of the "unremitting consideration of short-term political objectives."

In an interview with CBC News on Wednesday afternoon, Wallace said senators who simply vote along the same lines as their party colleagues in the House of Commons aren't giving legislation the independent scrutiny they should.

"I believe in order for the Senate to function as it was intended by the Fathers of Confederation ... political partisanship, as much as it can be, has to be removed from the Senate," he told CBC's Jacques Poitras in New Brunswick.

Wallace said he has been frustrated by partisanship in the Senate for a long time and that he endorses Prime Minister Justin Trudeau's plan to use an arm's-length advisory committee to appoint non-partisan senators.

Going forward, Wallace said, he has to do what he thinks is best: "Others can think otherwise, but I don't want to find myself constrained by  feeling that every time I go against the will of my political leaders, it's an act of disloyalty."

Wallace singled out "political partisanship" as an obstacle to the Senate performing its role as a chamber of "sober second thought" that scrutinizes legislation passed by the elected House of Commons. 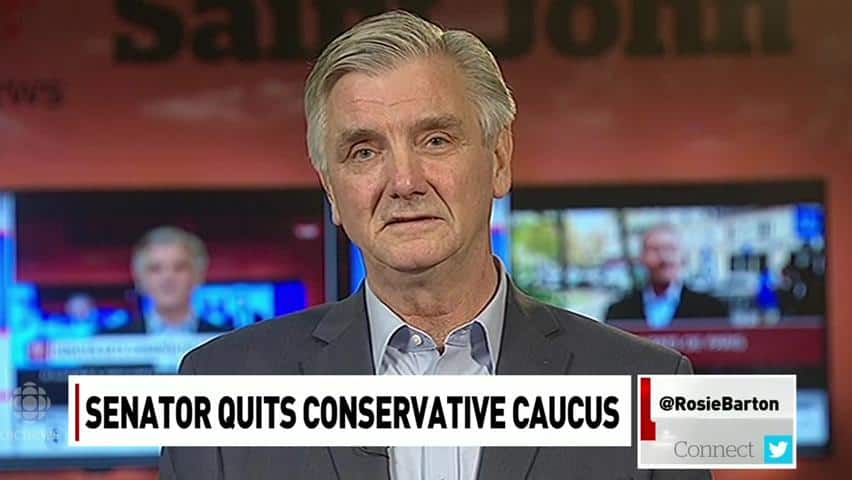 5 years ago
9:19
Senator John Wallace discusses the reasons behind his decision to leave the Conservative caucus 9:19

In a separate interview airing on CBC News Network's Power & Politics, Wallace gave a couple of examples of instances where he disagreed with his caucus colleagues.

"I had serious differences with how the suspension of senators was handled … and with the auditor's general report, how that was handled when it was released publicly and released to us," Wallace told host Rosemary Barton on Wednesday without getting into details.

"But look, you're in a caucus. You don't expect to agree on everything."

Wallace said that sitting as an Independent will allow him to voice his own opinions.

"I believe I can make the most effective contribution by expressing my own views... that are not influenced by political considerations," he said.

"I want to do the best I can for the institution," Wallace said, "because right now it needs all the help it can get."

There are currently seven other Independent senators in the upper chamber.

Senator Patrick Brazeau, who is on a leave of absence from the Senate until his case is resolved by the courts, welcomed Wallace to the "Independent Team" in a post on Twitter upon hearing of his resignation.

Welcome to the Independent Team Senator Wallace! <a href="https://twitter.com/hashtag/cdnpoli?src=hash">#cdnpoli</a>

Brazeau has been sitting as an Independent ever since he was expelled from the Conservative caucus in 2013 following his arrest after a domestic violence call to police.

He was recently granted an absolute discharge after pleading guilty to assault and cocaine charges in September, avoiding jail time and a criminal record.

Brazeau is still facing a criminal trial for fraud and breach of trust arising from his Senate expenses. It is scheduled to take place in March 2016.

In 2014, the Hill Times, a weekly political newspaper in Ottawa, identified Wallace as part of a group of Conservative and Liberal senators that was holding secret meetings to come up with a way to reform the Senate from within.