The RCMP believe two dangerous men who are wanted by the Halifax Regional Police may have escaped to southeastern New Brunswick. 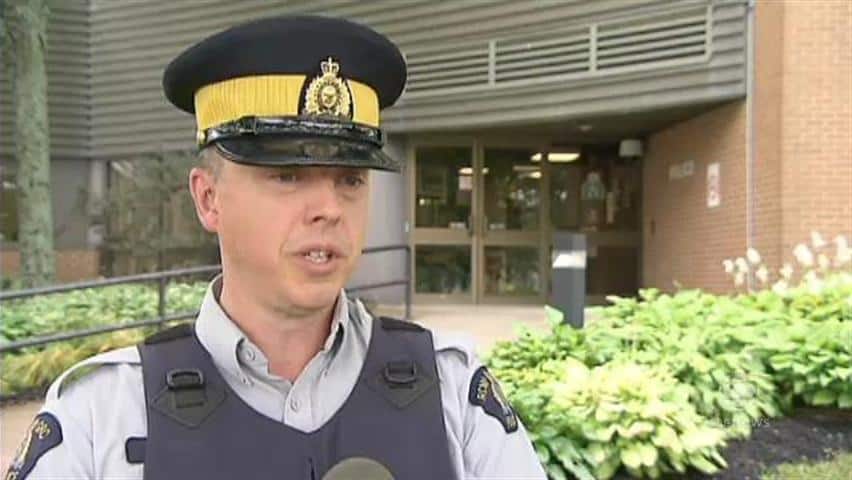 7 years ago
2:27
The RCMP believe two dangerous men who are wanted by the Halifax Regional Police may have escaped to southeastern New Brunswick. 2:27

The RCMP believe two dangerous men who are wanted by the Halifax Regional Police may have escaped to southeastern New Brunswick.

Police have been looking for Brandon Joseph Mombourquette, 28, and Andrew Jason Hudder, 26, for months for two separate incidents.

Investigators now believe the pair are working together and may be in the Greater Moncton area.

"Both of these men are considered to be armed and very dangerous," said Halifax police Const. Pierre Bourdages.

Police are warning people not to approach either suspect if they see them but to call the police immediately.

Hudder is a suspect in a drive-by shooting that happened in north-end Halifax last November.

"Mr. Hudder is believed to have shot at the cab carrying a passenger," said Bourdages.

Mombourquette is wanted for seven weapon-related offences stemming from a 2009 traffic stop when police found a loaded handgun in his vehicle.

Mombourquette failed to attend a court date scheduled for earlier this year. As a result, police issued an Atlantic region-wide warrant for his arrest.

Bourdages said the two men have Halifax connections and were recently seen travelling back and forth between New Brunswick and Nova Scotia.

Codiac RCMP, who are working with the Halifax Regional Police, received a tip on Wednesday night that the fugitives were in the Dieppe area.

"Basically we flooded the area with officers as much as we could," said RCMP Const. Damien Thériault.

"Officers were stationed in various areas and checking vehicles. Eventually the search was expanded — that included a large area in Moncton and Riverview as well," he said.

Police remained in the area on Thursday, continuing the search.

"Unfortunately we were not able to locate them and apprehend them, however we did seize a vehicle that we believe is linked to those two individuals," Thériault said, without offering any more details.

Meanwhile, some Dieppe residents, such as Denis Jalbert, say they're uneasy knowing two armed and dangerous men are possibly wandering in their community.

"Rotary Park is in the back, there's a marsh area … If anybody wanted to hide, it's pretty dark. There's no lights whatsoever in this area," Jalbert said.

Pat LeBlanc agrees. "Pretty scary, I must say. We're not used to things like this in Dieppe," she said.

LeBlanc suggests taking precautions. "Lock your doors and you know try to stay inside at nighttime. And in the daytime, be careful. If you see anything suspicious, report it to the police department."

Mombourquette is described as being six feet one inch tall, 165 pounds, with brown hair and brown eyes.