Fire departments from Moncton, Riverview and Salisbury were called to a large fire in commercial building on the 1800 block of Salisbury Road shortly before 9 p.m. Wednesday. 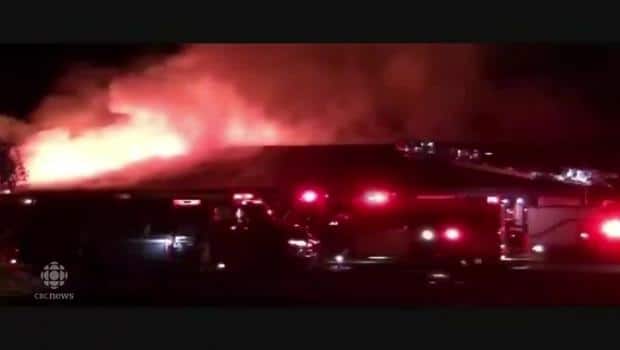 5 years ago
0:58
Wade Perry shared this video of a fire in Salisbury on Wednesday 0:58

Three Moncton businesses that all deal with woodworking and finishing were destroyed in a large fire in a commercial building on Salisbury Road Wednesday.

Fire departments from Moncton, Riverview and Salisbury were called to the fire shortly before 9 p.m.

Wade Perry took video of the fire and said it was coming from one side of the building and through the roof when they arrived and the flames spread quickly.

They had to syphon water from a pond and travel to a hydrant a short distance away to transport water to the site of the fire.

One of those affected was Jon Black, who calls himself an abstract woodworker.

Black made his living out of the shop by making mantles, cutting boards and other goods out of reclaimed word.

Black said he lost everything in the fire, including old beams, all his tools and has no insurance and will have to start over.