Craft beer in New Brunswick has come a long way in recent years, but a pair of Fredericton beer lovers have been taking their beers even further - almost 4,000 kilometres further, to be precise. 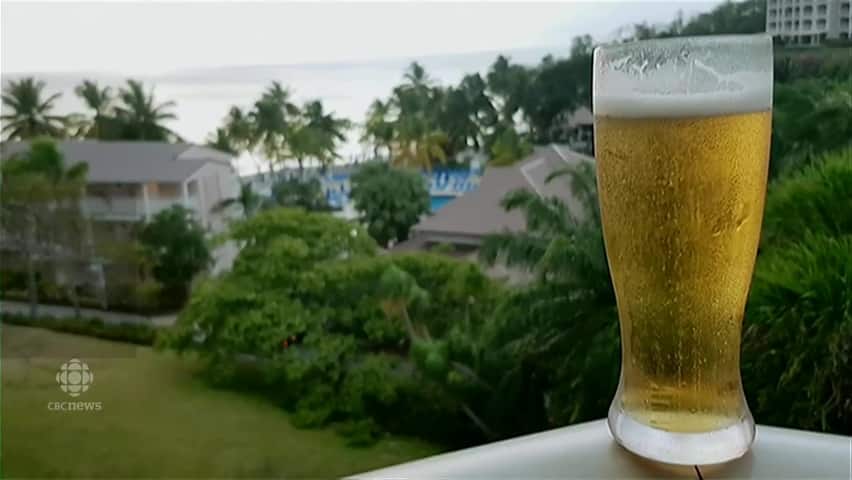 Craft beer in New Brunswick has come a long way in recent years, but two Fredericton beer lovers have taken their beers even further — almost 4,000 kilometres further, to be precise.

The founders of the Antillia Brewing Company have found success as the only brewers of craft beer in the West Indies on the small island nation of Saint Lucia.

"The raw materials and the agricultural materials that you can't find [in New Brunswick] are just abundant there," said co-founder Andrew Hashey. "And they're varied and different and exotic there and it's really kind of fun."

Hashey and business partner Greg Potten have been brewing in the tropical Caribbean nation for more than two years and are now considering expanding their distribution to neighbouring island countries.

Both men credit their experience working with the craft beer Picaroons in the early years of the brand when craft beer was just finding a toehold in the province as part of the reason for their success down south.

"Brewing with Picaroons gave us legitimacy," said Hashey. "We weren't just some guys coming down to try brewing beer, that we had experience and had learned a lot of lessons."

The brewery produces several different flavours, some considered more exotic by New Brunswick standards, but very much in line with what Saint Lucia has to offer.

"We have a line of traditional ales, but our bread and butter is the local stuff," said Hashey. "Our passion fruit ale, chocolate stout, our citric beer, the Naked Fisherman."

"It's something else when they're sitting there carving the passion fruit, and the whole place just smells like it," said Patton. "That's something you don't get anywhere else."

The pair divides their time between Fredericton and the Saint Lucien capital of Castries, where part of their brewing operation is located.

The beer market in Saint Lucia is dominated by two brands: Heineken and the local brew Piton. But Hashey says tourists are often looking for another option.

"People coming from Europe, Canada, or the States often want a different beer," he said. "And they're the ones who are drinking our beer the most. But locals...are now starting to get on board as well."

The company employs close to a dozen local residents to run the brewery and credit the staff's inventiveness with their success.

"They have to be because of the remoteness of their location," said Potten. "If something breaks in the middle of the night they either have to jerry rig, or MacGyver it, or we got to bring it in from Europe or Canada."

"All our employees are Lucien," said Hashey. "We don't bring anyone down there to do this. It's a very, very local operation."

Despite priding themselves on generating a very local product, Antillia is starting to expand beyond the resorts and restaurants on the island and into other markets.

Hashey said the beer is starting to appear in supermarkets and stores and is already being sold in Martinique, the country directly north of Saint Lucia.

"But because of the European connection with the history and culture, we're looking at the U.K. as well," said Hashey.

"Right now there's no place in Canada to buy," said Potten. "But someday."