The dying art of cursive writing is the focus of a new exhibition at the New Brunswick Museum. 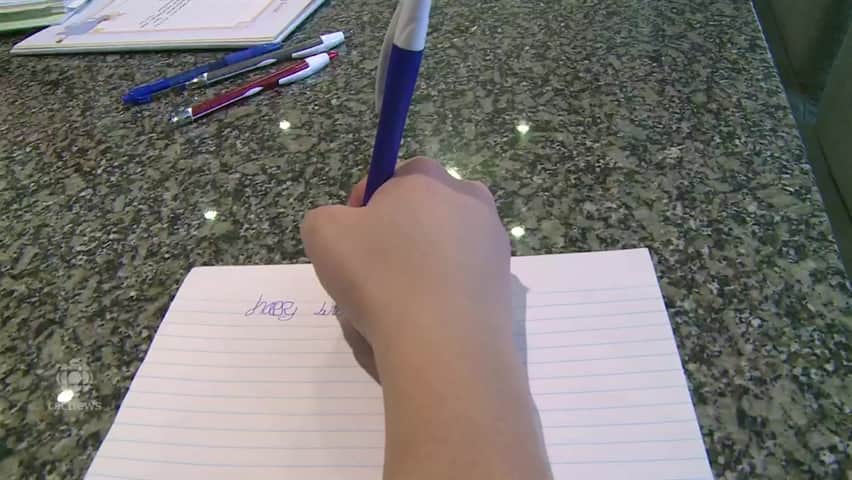 Should kids know how to read and write in cursive?

2 years ago
1:00
A new exhibit at The New Brunswick Museum explores the dying art of cursive writing. 1:00

The dying art of cursive writing is the focus of a new exhibition at the New Brunswick Museum.

The question is: What will it mean to the kids who can't read what's on display?

It's a real conundrum, according to the organizers of the show — brought on by the advent of texting, email and the evaporation of cursive instruction from the school curriculum.

Lead curator Felicity Osepchook says the inspiration for the project came to her a few years ago, after she heard a radio segment about Canada Post and the dramatic decline in its old core business.

"That got me thinking, 'What a shame that people don't write letters anymore,'" said Osepchook, who's been at the museum for 26 years and is the manager of the archives and research library.

One day this week, she took a seat at an old-fashioned school desk, where museum goers will be encouraged to practise their writing with help from booklets that demonstrate every stroke in the construction of every cursive letter in the alphabet.

Osepchook didn't give them a glance.

Instead, her pencil glided across the paper and into her past.

"If you loop your p's and g's, then your teacher you will please," she wrote in effortless, polished cursive that verges on calligraphy.

Kids have no signatures

At the Pierce household in Rothesay, CBC News put five siblings to the cursive writing test, starting with nine-year-old Charlie.

He tried to read from his baby diary, which was filled out by his mother, Charlotte, in her own handwriting around the time he was born.

He made a brave attempt but needed help with a lot of words.

And when he tried to write, he tried to form the letters without lifting his pen from the paper, but it was clear he wasn't working with conventional technique.

It was a similar story for his brothers, 14-year-old Tom and 12-year-old Henry.

Writing feels "complicated," said the only left-hander in the household, and she didn't remember learning cursive writing in school.

Anna, 14, read without hesitation, but when it came to writing, the going was slow and deliberate.

Printing comes much faster to these kids. Texting is a breeze.

"I think it's just something that we learned that my kids aren't really going to learn and that's OK," Charlotte Pierce said after watching the kids come up with some unorthodox signatures.

She said there are more important things to restore to the curriculum, including home economics and shop.

"Those are always a part of your life. We're always going to have to make meals for ourselves and sew a name-bar on."

The Department of Education and Early Childhood Development said the ability to read cursive writing is still important in today's world and still taught in school.

"In the anglophone sector, handwriting remains part of the K-3 curriculum with a primary instructional focus on communication and developing writing skills," communications officer John McNeil wrote in an email.

In francophone schools, cursive writing is taught in Grade 2 and Grade 3.

"In Grade 4, teachers are encouraged to continue focusing on cursive writing," McNeil said. "After that students can choose the script they prefer."

People who want to trace their roots will need access to archival documents, she said, and nearly all of those original sources are written in cursive.

"If you can't read or write cursive, you can't access those documents, so you would not be able to do all the research you want to do for your family history," said Osepchook.

Several experts in the museum collaborated on the exhibition, including Dominique Gélinas, head of exhibitions and visitor experience.

She said she's looking for ways to make the show more interactive. Visitors will be encouraged to mail letters on site.

Conservator Claire Titus said it's not just the cursive skill that may be vanishing. Actual archival documents are also prone to deteriorate without proper protection from light and humidity.

The iron gall ink that was commonly used is acidic, she says, and it does corrode.

"However, it's really important also to give people the opportunity to have access to these documents," Titus said. "It's a special opportunity to see the collection."

Some items on display include documents signed in 1664 by Louis XIV, King of France, Capt. William Frankland's Journal, circa 1781, and a very old valentine.

The exhibition, called Cursive Conundrum, opens Thursday and runs until May 26 at the Market Square location in Saint John.