For 10 years, the dozen or so women who belong to Heart in Hands in Sackville have been knitting and crocheting shawls for people experiencing hard times.

For 10 years, Erma Black and other dedicated volunteers have been knitting and crocheting prayer shawls for anyone they think might need one, and just recently they hit an impressive milestone — 500 shawls.

The Sackville seniors are all members of Main Street Baptist Church. They started making the shawls, wider than a scarf but a little smaller than a blanket, as a way to bring comfort to people.

"We always say it's a hug, it's a warm hug so people know that we are thinking of them," said Black.

They call themselves Heart in Hands because the shawls "come from our heart, but we make them with our hands," she said.

The group used to meet every few months to catch up and talk about who might need a shawl, but COVID-19 put a stop to that.

Yarn is harder to buy, and delivering the shawls is more difficult now, but Black said it's more important now than ever to keep making them. She knows as well as anyone that comfort can be hard to come by during the pandemic.

Black lives in a small apartment on the same property as the Drew Nursing Home, where her husband moved to receive a higher level of care in November.

Despite being so close to him, Black hasn't seen her husband in person since Jan. 14.

She was enjoying a single-two hour visit a week until her health zone moved back into orange-phase restrictions. When Black found out the nursing home would cancel visits at midnight on that day, she asked if she could arrange an impromptu visit. The staff allowed it.

"I haven't been back since," she said.

Drew staff have arranged for the couple to have video chats, which Black appreciates.

But overall, "it's been rough," she said.

So Black keeps herself busy crocheting. 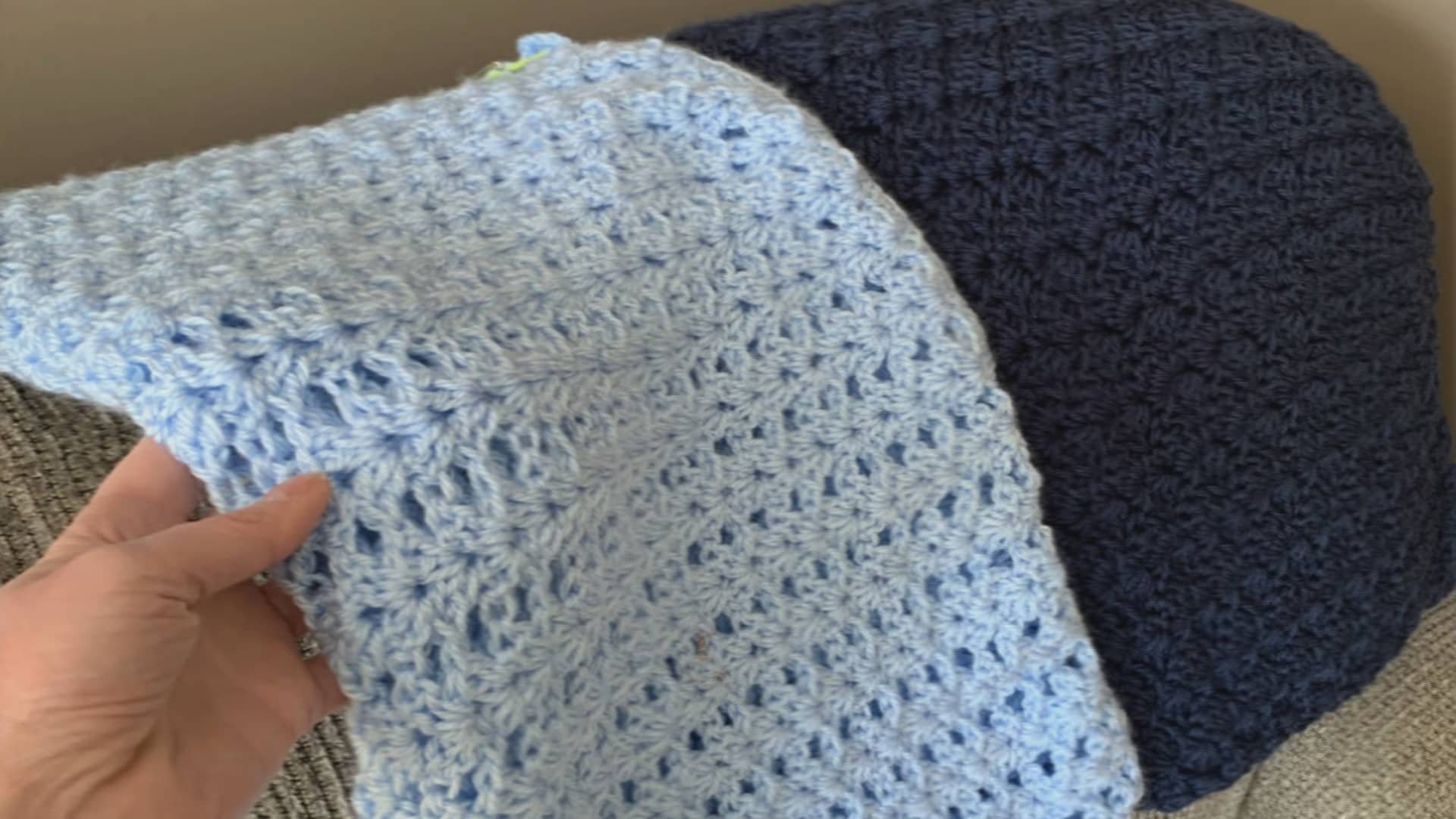 Sackville seniors' crocheted shawls bring comfort to those who need it most.

1 day agoVideo
1:37
Erma Black and some fellow dedicated volunteers have been knitting and crocheting shawls for anyone needing some solace, and just recently hit an impressive milestone of 500 donations. 1:37

Gerry Hart is a fellow group member, who said of her friend Black: "This lady just goes like a house fire."

Black said she has completed three shawls since Christmas, and the two women estimate she's made more than 200 over the last 10 years.

A small pink book has 504 entries, detailing who made each shawl, what it looked like and who received it. Some have been mailed to Europe and across Canada, but many others have gone to people nearby.

Hart said she gave a shawl to a relative who was diagnosed with cancer.

"And when she was finished with her treatments, she passed it on to another lady who was just getting started,' said Hart.

Black knew of a woman whose husband was also a resident at the Drew Nursing home.

"I gave her a shawl and she said, 'You know, when I come home, it's like a hug,'" said Black. "I know so many people who said it was a real blessing to them, and that's what we want.

"We get nice letters and notes back. One lady told me she wore hers out."