​It’s the warmest day of the year so far in Sackville. Blane and Heather Smith are outside, opening-up the garden centre they run beside their three-floor, 27-year-old home. And on a day like today, that home is being powered by sunshine. 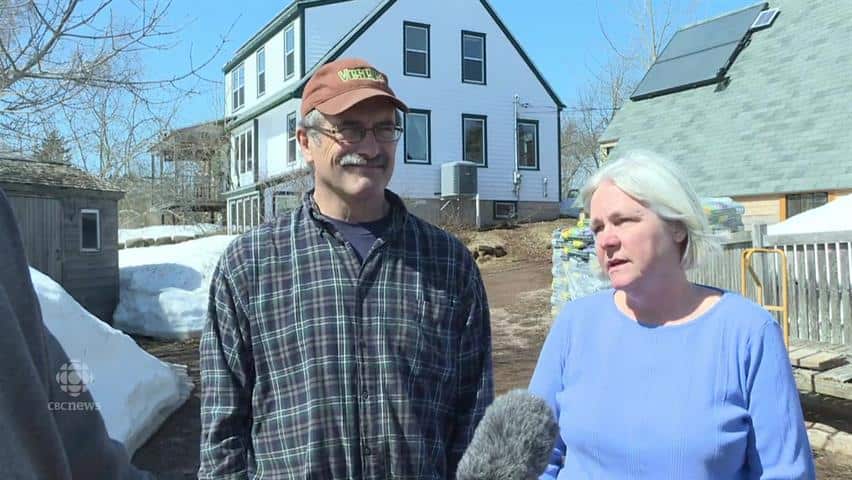 6 years ago
1:55
In part three of our series "Generation Green" we meet up with a Sackville couple who rely almost completely on solar energy - and the cost may be more manageable than you think. 1:55

It's the warmest day of the year so far in Sackville, N.B., and Blane and Heather Smith are outside, opening-up the garden centre they run beside their three-floor, 27-year-old home. And on a day like today, that home is being powered by sunshine.

Over the past few years the Smiths installed 24 photovoltaic panels on the roof for electrical power, two solar water-heating panels, and triple-glazed windows. Together with a heat pump system, the retrofits effectively mean the Smiths pay no more than a monthly connection fee to NB Power. Their most recent bill was $33.24.

"The beauty of being grid-tied is that you can save the power that you generate in the summer, when you generate the most, and use it in the winter when you are producing the least," says Heather Smith.

"We were inspired by Efficiency NB. They dangled the carrot and we went for it. They had programs, incentives to help."

$42K investment will take 20 years to pay off

In total, the Smiths spent $42,000 on improvements. The Residential Efficiency Energy Program run by the now-defunct Efficiency NB provided them $9,000 to offset the costs. The Smiths say their loan repayments equal what their power bill would have been.

"I would say it's pretty well exactly the same amount of money," says Blane Smith. "You know, the cost of your money [repayments], and the value of the electricity that's produced."

The Smiths do concede that to reach "net-zero" power, you do have to be prepared to reduce your electrical usage in the home, and you need to be in it for the long haul. It will take them around 20 years to pay off the investment. But they say their primary motivation has been to do their bit to reduce greenhouse gas emissions.

"First of all you have to feel like it's worthwhile to you. And we felt it was worth doing, just personally," says Heather Smith. "It's been very satisfying to see what an individual can do."

Woody Thompson of Fundy Solar installed the Smith's panels. He says it's still not exactly a growing sector.

Thompson grew up off-grid and believes the biggest advantage to renewable energy is not having to worry about how the future price of oil can affect your power bills.

The Smiths note that if they, or other residential solar generators, start producing more power than they consume, NB Power will not pay them money at the end of the financial year. The net metering system resets their account to zero every March 31.

Keith Cronkhite, NB Power's vice-president of business development and generation, told CBC News that could change in the future.

"As always, when we look at these programs going forward, we revisit them periodically to make sure that they're fair and reasonable, and could be subject to change going forward, given different conditions," said Cronkhite.

The role of Efficiency NB has now been subsumed into NB Power. The Crown corporation says it will announce details of a new home energy efficiency program in May.