Two New Brunswick communities that have large volumes of train traffic are asking new questions about rail safety in light of the Lac-Mégantic, Que., disaster. 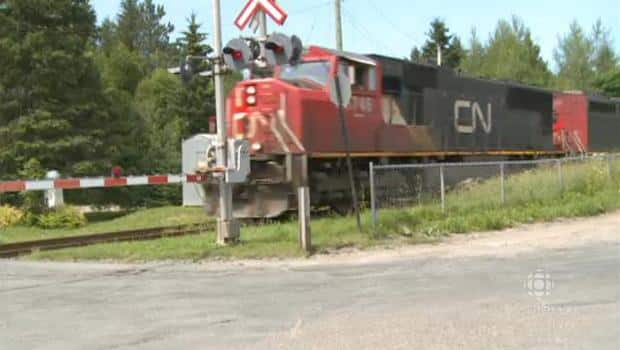 8 years agoVideo
2:11
Two New Brunswick communities that have large volumes of train traffic are asking new questions about rail safety in light of the Lac-Mégantic disaster 2:11

Two New Brunswick communities that have large volumes of train traffic are asking new questions about rail safety in light of the Lac-Mégantic, Que., disaster.

The tragedy in Lac-Mégantic, where a train derailment has levelled parts of its downtown, killed 15 people with 40 people still missing, has turned the spotlight on the risks that trains passing through communities can pose.

This week, Rothesay council passed a motion to find out just how many trains are coming through the town, how fast they travel and what they carry.

Deputy Mayor Nancy Grant said nearly 350 homes are next to the tracks and could be at risk.

The neighbourhood has only one entrance and exit and no evacuation plan in the event of a fire.

"That's the scary part for us. If there was an accident in Rothesay, we'd have to respond and we'd have to cope. But we have no input into regulation," she said.

Eckart Schroeter, a Rothesay resident, said the town has witnessed problems with trains in the past.

"We have had a derailment here, I don't know, about 20 years ago, right on this crossing down here," Schroeter said.

"Nothing is perfect, but I think a pipeline would be a better way to transport the crude here. But I think even now, we could do a lot to increase the safety of rail traffic."

The train that derailed in Lac-Mégantic was carrying a shipment of crude oil destined for the Irving Oil Ltd. refinery in Saint John.

In recent years, much of the oil that comes from the western provinces and is processed at the Saint John refinery is delivered by train.

The number of trains carrying oil into the city has more than doubled since the company built a new rail terminal last year.

Saint John's fire chief said this week he or some of his staff may visit Lac-Mégantic to see if there are any local lessons to be learned from the fatal train derailment over the weekend.

Fire officials in Harvey are also asking questions about rail safety after the tragic train derailment.

The trains that derailed in Lac-Mégantic would have passed through the village.

The local fire chief was assured the crude carrying trains posed no danger to people in Harvey.

"They told us basically that the cars were, well not indestructible, but very secure. As far as derailment they seemed to be up on safety for the public," Swann said.