More than a dozen federal scientists are spending August working on a research vessel with an on-board laboratory, moving throughout the Gulf of St. Lawrence, gathering information on North Atlantic right whales.

Federal research scientists are spending a month at sea collecting information on the health of the remaining North Atlantic right whales.

Eight of the endangered marine mammals died in the Gulf of Saint Lawrence this summer out of a worldwide population of around 400.

Scientists have long suspected the animals may not be that healthy to begin with. Determining how much that might play into their current situation is a big piece missing from the puzzle.

"We really don't know yet," said Andrew Wright, a researcher at the Bedford Institute of Oceanography, who studies the impact of shipping noise on right whales.

"That's the big problem. No one has really done this kind of work before."

Wright is one of more than a dozen federal scientists aboard the RV Coriolis II, a specialized research vessel with an on-board laboratory. They are spending a month moving throughout the Gulf of St. Lawrence, gathering information on the endangered marine mammals.

To help determine the population's health, the researchers are measuring stress and sex hormones, and the mammal's body.

"A lot of the focus with the North Atlantic right whales is with the fishing activity and the ships related to their deaths," said Wright. "But the other side of the coin is how much they reproduce."

Last year, there were no right whales born, an unprecedented event. But seven calves have been seen swimming in the Atlantic Ocean this year.

It is viewed as an encouraging sign. But for a species on the brink of extinction, the birth rate remains low.

"Stress in humans causes a lack of fertility," he said. "It's likely to be the same in the whales.

"So, by exploring how stressed the whales are related to perhaps ship noise or reduced prey in the environment, we can assess their potential for recovery — how likely are they to be reproducing at a level where they can recover from their current situation?"

The species is more prone to collisions than other whales. They are slow swimmers, often staying close to the surface.

It's with a couple of different drones that scientists are hoping to draw a picture of the overall well-being of the population.

One of the drones has been custom-built for the mission.

It's small, with pool noodles on the side to keep it afloat if it hits the water. It's designed to get close to the whale, to capture the spray from its blowhole — what scientists call whale snot.

It has a device that opens and closes as it flies over the animal. The team calls it Snotbot. 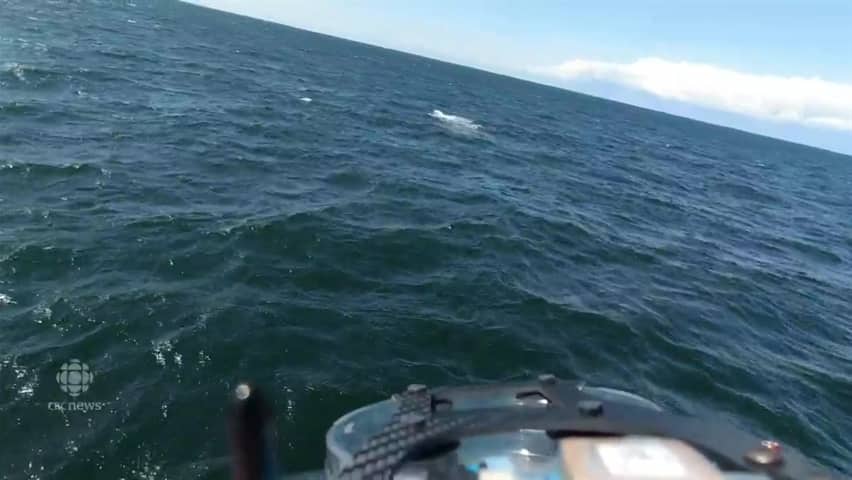 1 year ago
1:06
A custom-made drone captures spray from the whale's blowhole, part of research for the department of Fisheries and Oceans. The drone has a Petri dish, which opens and closes at it flies over the whale, to capture its snot. The team calls it the 'SnotBot.' 1:06

The substance contains a variety of hormones, including cortisol, testosterone and progesterone, which scientists will measure using mass spectrometry.

The idea was brought from the southern hemisphere, where Australian scientists have been using the drone to study the Southern right whale population.

Analysis of hormone levels in right whale feces showed that after the Sept. 11, 2001 attacks in New York, when there were fewer ships in the Atlantic Ocean, the whales were less stressed, said Wright.

"Ships create a lot of noise that sort of floods the Atlantic basin, and when that went down, the stress levels in the whales also went down," he said.

"We know they're generally stressed by ships, but what we don't know yet know is how they're stressed by acute exposures. So if a ship comes right by them, how do they respond?"

A second drone, with a laser, records the whales' height and length. The ratio, allowing whether to determine if a whale is emaciated, gives another clue about its health.

It'll be the first time these different measures are put together to paint a global picture of the species' health.

Another group on board is measuring the impact of a potential oil spill in the Gulf of Saint Lawrence on right whales.

Vessels carrying oil travel in the Gulf's shipping lane, close to where right whales have been migrating in the last few years, and the work will help determine what government's response should be.

In two weeks, researchers said they've identified 40 North Atlantic right whales, but estimate they have seen twice as many individuals.

"The numbers that we saw was really amazing," said Alice Ortmann, a BIO researcher studying the impact of oil on ecosystems.

In one aerial snapshot taken during the trip, 10 North Atlantic right whales can be seen swimming next to one another. It represents 2.5 per cent of their global population.

The researchers working during this trip will lay the groundwork for future Department of Fisheries and Oceans policy.

"The more information that we can get about the habitat, how the whales are using the habitat, what's driving them to be here, what's providing them with their food source — all of that information we can take that and give it to the people who have to make decisions," said Ortmann.

Looking at the future

Researchers have also been sampling the whale's prey — tiny crustaceans known as zooplankton.

"One of their motivators for being in Canadian waters is feeding," said researcher Catherine Johnson.

"So we need to know where these high concentrations are developing, in order to predict where the whales are likely to be, to mitigate the risk."

Their findings will help build a map of where the prey is found in high concentrations in the Gulf.

Copepods, one type of zooplankton the right whales feed on, normally found in the Gulf of Maine and the Bay of Fundy, seem to have been migrating north, likely due to warming waters, and are believed to be the reason for bringing the right whales into the Gulf of Saint Lawrence.