In 1911, John Joe of Elsipogtog First Nation was working as a labourer and seaman, loading pulp onto ships in Richibucto Harbour. Five years later, he was a soldier in the First World War, digging tunnels underneath no man's land in France and Belgium.

In 1911, John Joe of Elsipogtog First Nation was working as a labourer and seaman, loading pulp onto ships in Richibucto Harbour.

Five years later, he was a soldier in the First World War, digging tunnels underneath no man's land in France and Belgium.

As a result of the tunnelling work, Joe, a private, developed eczema and was treated in military hospitals overseas before being sent back to the trenches. He was killed at Passchendaele, Belgium, on Nov. 16, 1917.

For Remembrance Day, CBC News explored the stories of Joe and three other Indigenous soldiers who left New Brunswick to fight in the Great War. They represent a small fraction of First Nations soldiers from the province who served, many never returning.

Their communities say they have felt the gap in memories the soldiers would normally have passed down. Now, 100 years after the end of the war, some feel an urgency to collect their stories.

The records don't reveal their lives or personalities. They're more like stories in point form, data recorded by military clerks and officers — things like height, religion, skin colour, infractions and battles — that suggest a faint picture of a soldier's experience.

On arriving in England as part of the 32nd Battalion, he was transferred to the 87th Battalion, and then attached to the 182nd Tunnelling Company. Across the Atlantic, he left behind a wife, Madeline Simon, and a son.

There are no confirmed photos of Joe, but he was described on enlistment as five feet 3½  inches tall, with brown eyes, black hair and a "copper" complexion.

In June 1916, he was absent without leave, forfeited two days pay and served 48 hours in detention.

Joe was involved in significant Canadian engagements, including the battles of Vimy Ridge and Hill 70 in France.

He was killed in action in Passchendaele on Nov. 16, 1917. His body was never found, but his name is on the Menin Gate (Ypres) Memorial in Belgium.

Joe's medals, decorations and pension were sent to his widow, Madeline Simon, but only after being filtered through the Department of Indian Affairs.

Madeline Simon had to fight to receive the pension.

"Is she able to take care of that money or should we give it to the priest to give it to her?" says a letter in the National Archives uncovered by Patrick and Margaret Augustine, the unofficial historians and genealogists at Elsipogtog.

Patrick and Margaret are descendents of Simon through blood and marriage, respectively, and have researched Elsipogtog soldiers and veterans and their families.

The letter was written by an Indian Affairs official and showed up in correspondence flowing from a New Brunswick priest's efforts to help Simon get the pension.

Margaret Augustine said the correspondence was a sign of racism in the bureaucracy.

When Simon did finally receive the pension money, she used it to buy a cattle farm for her parents, who were raising her late sister's children.

"By buying that cow, those cows, she's not only helping her parents, she's helping the whole extended family, the kids that they are bringing up," Margaret said. "The grandparents have an important role in the family."

Madeline's son with John Joe died in his teens. He was Joe's last true descendant.

Some soldiers have no direct descendents to tell their stories, so the history of Indigenous contributions to the war are often lost or forgotten, Margaret said. 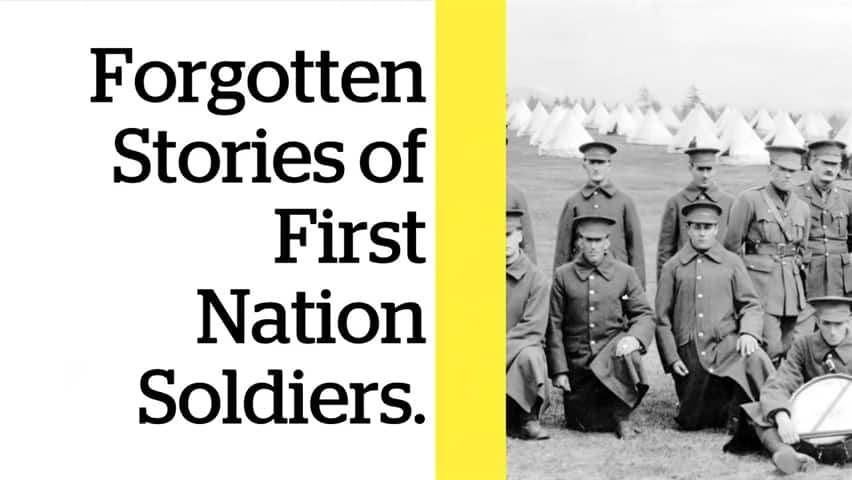 ‘It’s almost as if we were just guests, but we were more than that.’

2 years agoVideo
1:19
Why forgotten stories of First Nations soldiers should be remembered 1:19

Even less is known about the other soldiers explored for this story.

"We just have maybe a few in our generation left who have those stories," said University of New Brunswick elder-in-residence Imelda Perley.

"We come from an oral tradition to begin with … but I think they've never been asked, to tell you the truth."

Several months after arriving in England, he was transferred to the 26th Battalion in France, a famous New Brunswick battalion during the war.

Back home, Alexander left behind his wife, Mary Jane Alexander, a son, Peter Alexander, and a daughter, Florence.

He was described upon enlistment as five feet 10 inches tall, with dark skin, eyes and hair. In a section about religion, a clerk checked Roman Catholic.

In August 1916, Alexander, too, was absent without leave and was sentenced to 28 days of field punishment No. 1.

He was killed April 9, 1917, the first day of the Battle of Vimy Ridge. His name is on the memorial there.

On his pay sheets, his wife's name was often crossed out, with Father P.W. Dixon listed as his beneficiary and guardian.

"Wife living but not capable of handling money," says an official's note on some pay sheets, suggesting Dixon controlled the money that was sent home.

Alexander's decorations were sent to his son, and his plaque and scroll memorial went to Mary Jane, both packages routed through the Department of Indian Affairs.

The paternalism of Indian Affairs in its treatment of Indigenous soldiers and their families is evident in official documents, but the impact went further than withholding pensions and medals, the Augustines said.

Patrick remembers when his mother and chief fought to keep him and his siblings out of residential school. His father was in the Armed Forces, stationed in Nova Scotia, but because he was not living at home, an Indian Affairs agent tried to take the children away.

Patrick's family succeeded in keeping the kids, but in many cases, when husbands and fathers didn't come home from war or came home traumatized, federal agents took the children away.

Louis John was born in Bathurst on March 7, 1894. He had a brother, John Weauche, was adopted at a young age by Barney and Bella Augustine, and grew up on Eel Ground First Nation.

John worked as a labourer before he enlisted in Sussex on July 13, 1915, joining the 55th Battalion, B Company.

His enlistment document says he was five feet five inches tall, with a dark complexion, brown eyes and black hair. His medical report shows he had 20/20 vision. He was Catholic.

Before he deployed to England, Louis John was labelled a deserter on Oct. 12, 1915. He came back to the army two days later and was sentenced to 48 hours detention. Given his alleged desertion was so short, and the punishment not that severe, it's likely he was just absent without leave.

John arrived in England on the steamer Corsican on Nov. 9 1915. He was transferred to the 58th Battalion and fought in the battles of St. Eloi Craters and Mount Sorrel in France. He also fought at the Somme with the 58th Battalion.

He was killed in action near Courcellette, France, on Oct. 8, 1916, a month and a day shy of a year overseas.

Louis John willed all of his possessions to Mrs. Barney Augustine, his adoptive mother.

His body is buried at the Adanac Military Cemetery in Miraumont, France.

Although Louis John probably wasn't a deserter, there could have been reasons an Indigenous soldier had second thoughts about the army, Perley said.

Some soldiers' documents show punishment for drunkenness, but Perley said alcohol abuse was a common way for Indigenous soldiers and veterans to cope with what they saw and the racism they encountered.

"Alcohol was a weapon against us," she said.

Perley remembers an Indigenous vet telling her about coming home from war and walking into a bar in uniform. The owner refused to serve him, even though he had just been giving out drinks to non-Indigenous men in uniform.

Patrick Augustine said it's important to understand offences such as absence without leave and alcohol abuse in the proper context.

"A lot of people did it in the First World War because they were in the trenches, and they would sneak away looking for food or something," he said.

Stephen Bernard of Esgenoopetitj First Nation was born on March 15, 1894, and was working as a labourer when he enlisted on Feb. 15, 1916, in Chatham at age 21. He joined the 132nd Battalion and was later transferred to the 87th.

The will he signed before sailing to England left everything to his father, Peter Bernard. He also left behind his mother, Mary Ginnish, and brother Frank Bernard.

On his attestation papers, Bernard was described as five feet nine, copper complexioned with brown eyes and black hair. Under the distinctive marks section of the form were the words "Mic Mac Indian."

His active service forms reveal he was attached to the 182nd Tunnelling Company. Records also indicate Bernard got into some trouble, with two counts of absences without leave and one breaking into the canteen, for which he received 14 days detention.

Bernard fought in major engagements, including Vimy Ridge, before he was fatally injured the first day of the Battle of Hill 70. Medical records show he had a fractured lower jaw and gunshot wounds in his abdomen and right leg. He died Oct. 11, 1917.

Bernard's medals were received by his father in Eel Ground First Nation in 1928.

When he was younger, Patrick Augustine attended Remembrance day ceremonies in Oromocto every year with his family. His father would wear his Black Watch uniform and march in the military parade.

Patrick remembers feeling "a kind of a sadness" during the ceremonies.

He said he would like to see a permanent exhibit for Indigenous soldiers in the Canada War Museum, and for the contributions of First Nations soldiers to be taught in all school curriculums.

"I don't know if it's they weren't appreciated for their contributions or they were minimized," he said. "I don't think there was enough importance placed on it."