How are schools accommodating fasting students during Ramadan?

With more Muslim students in New Brunswick, school districts are trying to accommodate teens who are fasting for Ramadan and seem a little tired in class.

With more Muslim students in New Brunswick, school districts are trying to accommodate teens who are fasting for Ramadan and seem a little tired in class.

And young Muslims, whether in public school or university, are trying to adjust to fasting in a province just beginning to understand the significance of this religious observance.

"You feel Ramadan in Syria more because all people will know about it," said Hala Bakhash, a 14-year-old student at Leo Hayes High School who arrived in Canada less than two years ago.

"But in here you have to explain it more."

Ramadan is one of the five pillars of Islam and observing it for 30 days is mandatory.

All able-bodied Muslims must not only abstain from eating and drinking — yes, even water — from sunrise to sunset, they also have to make an effort to read the Qur'an, pray more and avoid gossip and anger.

But with Muslims a minority at most in New Brunswick schools, Ramadan is less the national observance that Hala remembers and more a solitary introspection.

"It makes me feel people's feelings," Hala said of fasting.

"There's some people who [don't] have food or enough food even so that makes me remember them."

How schools are accommodating

Brad Sturgeon, principal at Leo Hayes High School, said the Anglophone West School District distributes a handout that explains Ramadan and what impact fasting may have on students' ability to focus in class or participate in extracurricular activities or physical education classes.

He said that handout has been distributed to the district's 69 schools for around three years. 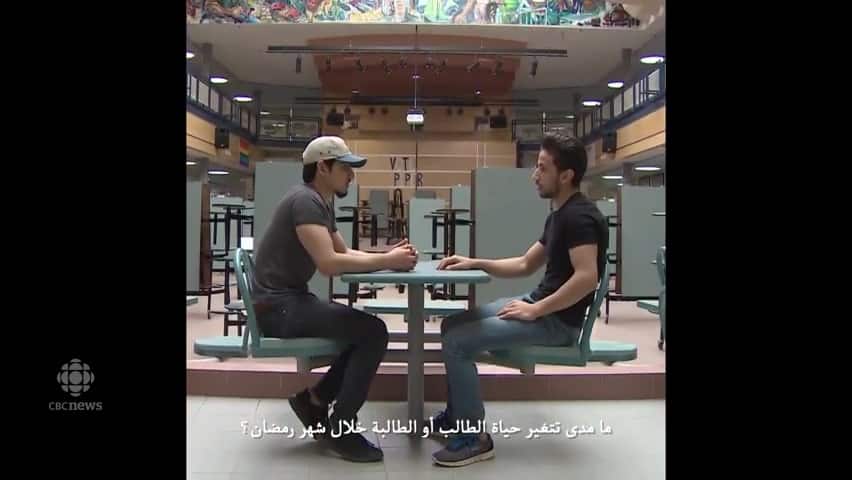 "It's almost become just a seamless part of the school year. The fact sheets arrive, everyone's aware it's happening, it's distributed. We know there are students participating in this but it seems just like a part of the culture and fabric of the school now," he said.

As part of the accommodations, he said fasting students are allowed to spend lunch time in a classroom so they don't have to watch people eat.

Ahmad Alrayes, a Grade 12 student, said the first few days are particularly challenging when you're surrounded by food.

"The first few days it will be hard for us just to kind of see other people are eating at lunch time just eating drinking and hanging around," he said.

"Sometimes you will forget and go to grab some snack to eat and you'll feel, 'Oh I'm fasting, no,' and after a couple of days you'll get used to it and it'll be all fine for you.'"

The handout also explains to teachers that students may need to be excused from physical education classes or extracurricular activities.

But for Muhammed Riyas, a Grade 12 student, fasting doesn't stop him for playing his favourite team sport.

Anglophone West School District, which includes Fredericton, may be the only district with a concrete handout distributed to teachers specifically during Ramadan.

Anglophone South, one of the two largest districts and includes the Saint John area, has no policy, but the district made all the principals aware that Ramadan has begun and that fasting students may ask to be excused during lunch time, according to Lynn MacDonald, the newcomer and international student co-ordinator.

The Anglophone North, Anglophone East, Francophone Nord-Est and Francophone South school districts don't have handouts but all said they would accommodate students if the demand was made.

Francophone Nord-Ouest did not respond to questions about the district's policy around Ramadan.

Karim Fagir goes to the University of New Brunswick but said the challenges are similar to when he went to high school during Ramadan.

"It's not something that people naturally think about," he said.

"Not that I have difficulty or have a hard time or frustrated speaking to people, but it is nice to speak to somebody who is familiar with it and who does know about Ramadan. You gotta appreciate a friendship like that."

'You still have to work'

Ahmad Rayis said aside from going to school, he also has two part-time jobs. He said he works seven days a week and won't lessen the workload for Ramadan, even if one of the jobs is at a fast food restaurant.

He said teachers and employers alike have been understanding.

"It's fast food and you have to run a lot with the busy rushes and stuff like that," he said.

"They told me to go sit down and to relax. They know that I'm fasting and it's hard to do. … All the teachers who know I'm fasting they ask about Ramadan and they ask about all that stuff and when they're eating snack they say, 'Oh I'll just eat when you're not here.'"