A New Brunswick business owner is accusing a Public Safety officer of being overzealous and intimidating in enforcing COVID-19 rules.

A New Brunswick business owner is accusing a Public Safety officer of being overzealous and intimidating in enforcing COVID-19 rules.

Nicola Matheson, who owns Nikki's Island Convenience on Campobello Island, captured footage that appears to show a peace officer removing his mask while inspecting her store.

Masks are mandatory in all indoor public spaces in the province.

Matheson said the visit Monday started out with the peace officer telling her how "wonderful" her store is.

There is a hand-sanitizing station outside the store, masks for people who need them and signs posted, said Matheson.

"We followed all the protocols," she said.

The store is also offering free deliveries and has built a drive-thru window to help customers feel safe.

"We're going above and beyond."

But then the peace officer proceeded to tell her he had some "bad news."

She was fined $291 for not having a hard copy of the store's COVID-19 operational plan to show the peace officer.

Matheson said she was unaware of the requirement and argues she's not alone, based on the number of warnings and fines issued to other businesses in recent days, and the number of owners she's heard from since she posted about her experience on Facebook.

She was incredulous and said the situation quickly "turned very hostile."

"You're giving me a $300 fine because I didn't have a piece of paper, but I followed everything else that actually affects the safety of people?

"If it wasn't for our store and one other store on the island, 800 Campobello residents would have to travel through the [United] States to go get their groceries, which is even more risky," she said.

Matheson offered to fill out the paperwork on the spot but said she was told, "Too bad, you're getting a fine."

Matheson alleges she was threatened to be arrested

By this time, her husband was getting "a little huffy," and the peace officer threatened to remove him from the store, according to Matheson.

The peace officer then demanded to see her identification, and when she failed to produce any, he said he was detaining her.

If she left the store, he told her she would be placed under arrest, she said.

"Meanwhile, during this whole time, he's taking his mask, pulling it down over his nose … And my husband said, 'Put your mask on. I'm more scared of you doing that than this paper that you're worried about [not being] under my counter.'"

New Brunswick's chief medical officer of health has advised everyone to act as if they have COVID-19. Some people with COVID-19 are asymptomatic and people can be infectious without knowing they have the respiratory disease.

Matheson said her husband asked the peace officer to step a metre back, but he did not.

The encounter ended shortly after she pointed out to the peace officer that his actions were captured on the store's security video.

He issued her the citation, she signed it and said, "I'll see you in court."

The president and CEO of WorkSafeNB told CBC News that businesses typically get a warning first. But if problems continue or pose a serious risk, a business could be fined or shut down, Doug Jones said.

Matheson said she's never had any other COVID-19 infractions. "I've never had more than a speeding ticket in my entire life."

"We're doing everything we can and then to be given a slap in the face like that by someone who's not even following the rules himself," she said, her thoughts trailing.

"I'm just thankful that we have it on video because I'm sure it would be denied."

Matheson included in her Facebook post some still images from the video, which appear to show the peace officer with his mask under his chin. The post has been shared nearly 700 times and garnered more than 400 comments, including offers by members of the community to help pay the fine.

Matheson isn't the only business owner speaking out about a negative experience with enforcement officers.

'It's intimidating to the customers'

Liz Fulton, who owns two Pub Down Under locations in Saint John, as well as Callie's, hopes to see changes in the approach to inspections.

"It's pretty intimidating when you get six to 10 guys coming into one location and some of them dressed in combat gear," she said. "It's intimidating to the customers and the staff."

One of her bartenders, Heather Murray, calls it "a bit of an overkill."

"I agree with them coming and checking to make sure [we're in compliance] because this is a serious situation," she said. "I''m just not sure it needs to be that many at the same time." 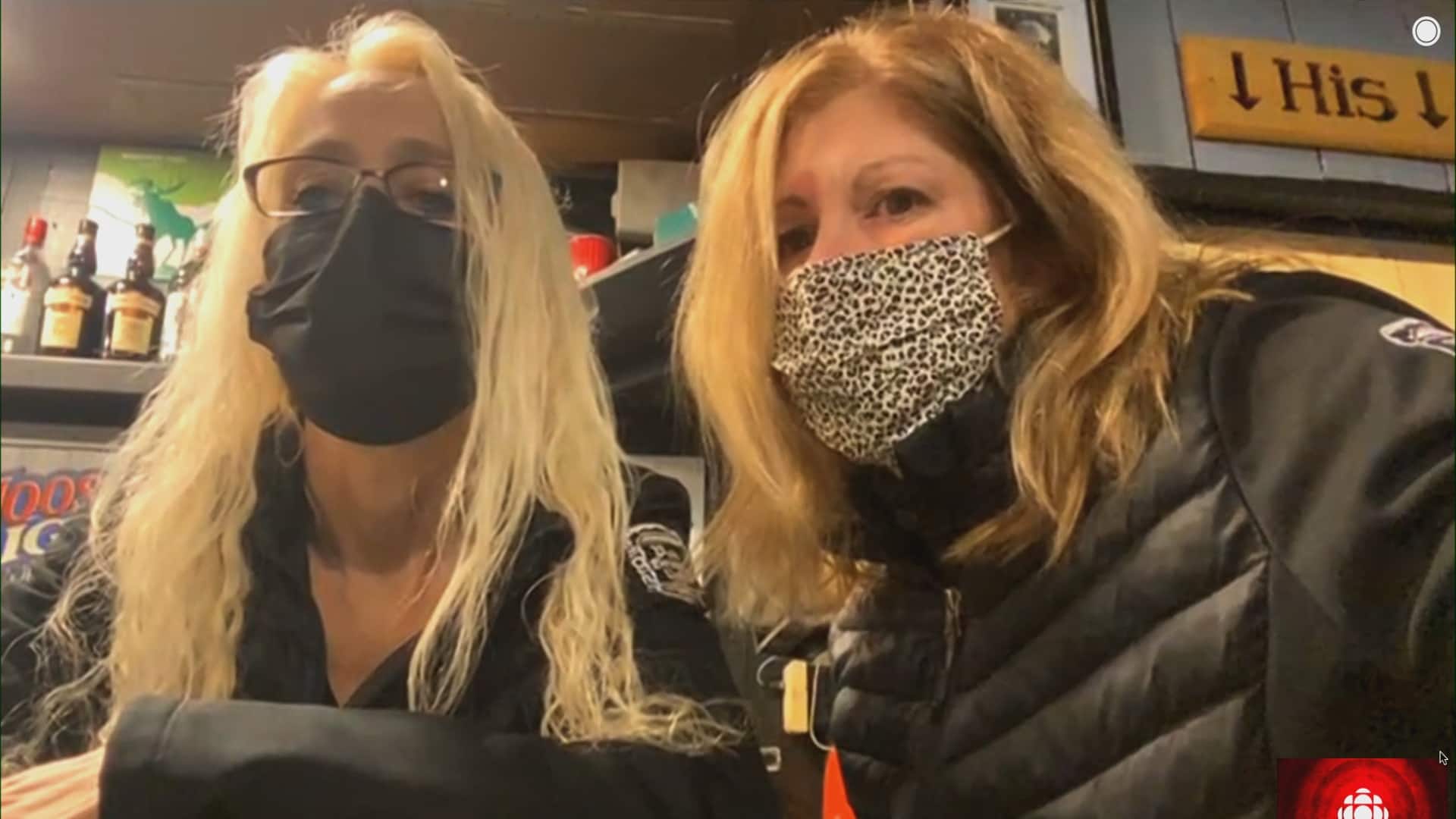 Murray noted Saint John is at the orange level of COVID-19 recovery and has to follow a single-household bubble rule. Meanwhile, "they have six [officers] coming in three different … cars walking through the establishment to make sure that we're complying. I'm not sure how compliant that would be."

In addition, the orange phase was only implemented last Friday at midnight, but they started enforcement "full force" Saturday, issuing fines, said Murray.

"They didn't give the public nor the establishments enough time to actually once again retrain your brain to a new way of living."

Fulton said she realizes the officers have a whole province to protect, but "maybe they need to take a step back and look at the other side of things as well."

CBC News requested an interview with the Department of Public Safety on Wednesday, but instead received a three-sentence emailed statement from spokesperson Geoffrey Downey.

"Justice and Public Safety enforcement officers work to ensure the health and wellbeing of all New Brunswickers, which includes enforcing the Emergency Measures Act," said Downey.

"We are aware of the complaint and it is being investigated," he said, referring to Matheson's Facebook post.

Complaints can be sent in writing to ienb.ialnb@gnb.ca, he added.

If you're going to enforce the rules, you probably should be following them yourself.- Nicola Matheson, owner of Nikki's Island Convenience

Public Safety officials contacted Matheson on Wednesday and she is "very hopeful" a resolution can be reached before her court date, Jan. 12.

She hopes to see her fine waived and more respect shown in the future to business owners that are struggling to adhere to the rules and to survive COVID-19.

As for the peace officer? Matheson contends his behaviour warrants "more than a slap on the wrist."

"I think he is abusing his power and whatever they have to do to make sure he can't treat anyone else like this. … Maybe he should have to go through some heavy duty retraining."

"If you're going to enforce the rules, you probably should be following them yourself."