“As an electrician I see on the opposite side of the walls,” said Roger Maillet. "As a medium, I see the other side of the universe.”

Roger Maillet is a bit of an oddity in Cap-Lumière, a tiny New Brunswick village of 1,000 people bordered to the east by the Northumberland Strait. The main landmarks are a seafood processing plant, and the lighthouse at Pointe de Richibucto, with its hazy views of P.E.I. in the distance.

People tend to stare at Maillet's truck when he drives around to job sites in rural Kent County. Sometimes, they even pull out their phones and take pictures.

On his Ford F150, one logo plugs his skills as an electrical contractor. Directly beside it, another decal advertises something more esoteric: "A New Beginning: Clairvoyant. Intuif. Medium." 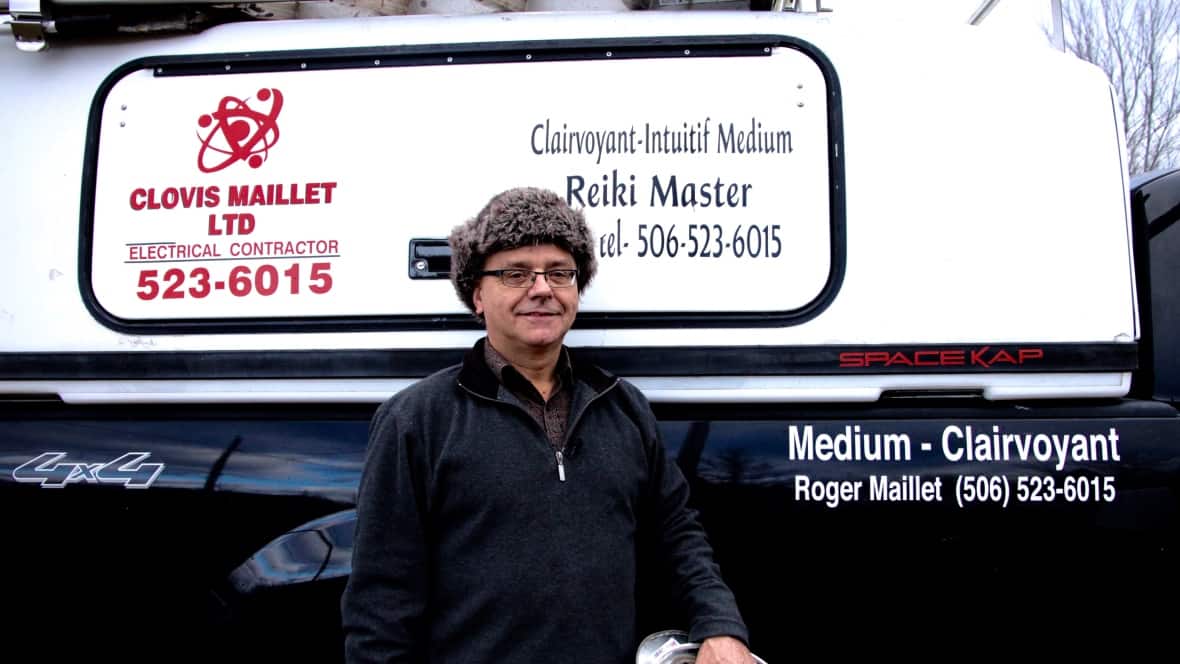 'You really feel the energy through it'

3 years ago
0:36
Roger Maillet has been certified as an electrician for 37 years. He is also, he says, a psychic medium who communicates with spirits, sees visions of past lives, and finds lost people and objects. 0:36

Maillet has been certified as an electrician for 37 years. He is also, he says, a psychic medium who communicates with spirits, sees visions of past lives, and finds lost people and objects.

"I do my meditation next to the water," said Maillet, 57, sitting in his old family home overlooking the ocean. He redecorated the former dining room after the death of his mother, stocking it with crystal balls, tarot cards, essential oils and religious icons. One wall is entirely covered in a psychedelic rendering of two killer whales jumping from a richly hued, purple sea.

"I am always drawn near the ocean," he said. "There is more connection there.

"As an electrician I see on the opposite side of the walls. As a medium, I see the other side of the universe."

'Watching too many cartoons'

Growing up on the family homestead, Maillet said, he was always fascinated by depictions of fortune-tellers and psychics on TV. At age 8, he says, he had an out-of-body experience, seeing himself from across the room as he lay on the sofa. He said his two sisters, Gisèle and Anna, also have psychic abilities.

"When I talked to my mom about it, she said, 'You're watching too many cartoons, that is fairytale stuff,'" Maillet said. "But at the same time, I was intrigued."

He went to community college to become an electrical contractor like his father, Clovis Maillet, for whom his business is named. At one point, Roger was supervising more than a dozen employees — but found the work "stressful," he said.

On the electrical side, I can light up the outside of your home. As a psychic, I'm able to light you up from the inside.- Roger  Maillet , psychic electrician

Besides, "people were telling me that I was more than just who I was projecting myself to be as an electrician," he said.

He started seeking out the services of New Brunswick psychics, including the late Shediac hypnotherapist and alternative healer Ovila Doiron and Cocagne medium and reiki master Geoffrey McLatchie.

"The more I got into it, the more I wanted to learn about it," Maillet said.

More than an electrician

His spirituality, he explained, borrows from different traditions — St. Michael the Archangel is one of his major spirit guides — but he also consults the tarot, mythology and crystal balls. He claims to sense images from people's past lives, get in touch with their "inner child," and even sees through the eyes of his clients à la Bran Stark from the show Game of Thrones.

Last fall, he travelled to Hawaii to study with born-again Christian clairvoyant Doreen Virtue, who writes extensively on angels and other spiritual topics.

When Maillet sits down with a client, he said, he sees their energy "like a TV screen — like they don't exist anymore. I capture the energy, and then I tell you what I see. All of the symbols — animals, boats, houses, people — all of it is related to where you stand today." 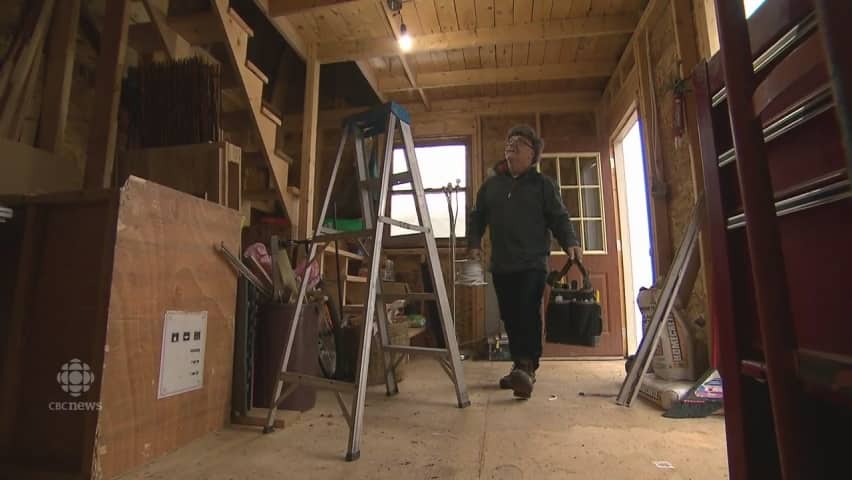 'Your soul has to tell you something that lights you up'

3 years ago
0:35
As an electrician I see on the opposite side of the walls. As a medium, I see the other side of the universe. 0:35For five years, he's been plugging his abilities at various stops on the Atlantic Canadian wellness-expo circuit across. An average reading costs about $80.

But Maillet said it's not about the money.

"If I win a million, it will be free for everyone," he said. "It is so important for humans to know their big value in life."

In such a rural area, one might expect Maillet to be judged by people with more traditional beliefs.

"Some people are scratching their head," he admitted. "Some people are scared because they don't know what is going to pop up, which is normal. Sometimes they will be in denial. It's their choice. We are all human and we have choices."

"But sooner or later, it will bite them because they'll be saying, 'He told me that way back.'

"Everything has an energy: glass, water, vehicles, and humans, all have energies that they emit. Everything, all the way around, is all energy. "

With three to four clients visiting him for readings each week, plus many more for electrical repairs, the odd combination seems to be working out, he said.

Can he offer credulous clients a deal — say, a wiring job and a tarot card reading — all in one visit? It's not unheard of, Maillet said.

"When clients see the vehicle with 'medium clairvoyant' on the side of it," he said, "sometimes after that, they want to have a reading from curiosity."

"On the electrical side, I can light up the outside of your home," he said. "As a psychic, I'm able to light you up from the inside."

"It's a double combination."

Julia Wright is a born-and-raised Saint Johner, reporter, photographer, and the host of Information Morning Saint John on 91.3FM. She has been with the CBC since 2016.