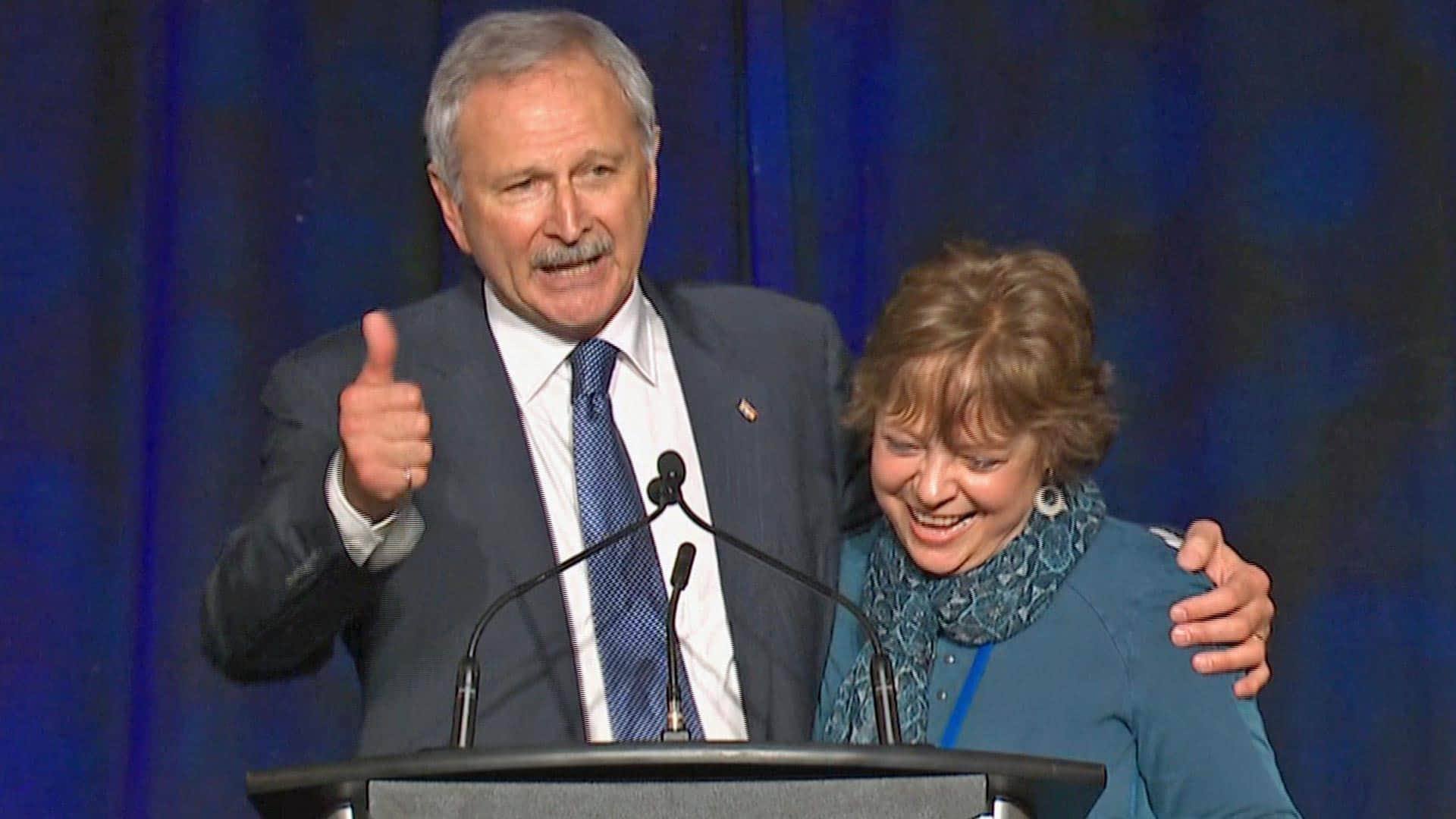 The final ballot came down to two Saint John-area candidates, a region considered a stronghold for the Tories after the 2014 election.

The 62-year-old former finance minister led on every ballot, while Norton finished second in each of the three rounds of voting.

Higgs told the crowd that he intends to do politics differently as leader.

"Winning this means that people in this province have hope that we're going to put the province first and politics second," he said. "And that's not just a slogan for me. I've been this way since I started."

Higgs, who was an executive with Irving Oil Ltd. before entering politics in 2010, said he understands he has a lot of work to do as the new Tory leader.

"We have a party to rebuild, we have a party to unite, but guess what, we are the party for the future of this province because we are uniting people across party lines," he said at the main convention venue in Fredericton.

"We are bringing a new message to politics."

Higgs was able to pick up some support from other candidates, such as Jean Dubé and Mike Allen, heading into the final ballot.

However, Moncton lawyer Monica Barley, who earlier in the day had picked up the endorsements of Jake Stewart and Brian Macdonald, encouraged her supporters to back Norton.

Norton, who was considered one of the front-runners heading into Saturday's vote, saluted Higgs on his victory.

This was Norton's first foray into provincial politics and he said he was proud of his campaign.

"We know that this an uncertain process, but we know that we have an incredible team. We had teams from Grand Manan Island right to Bathurst working to hold delegates and get them to vote," he said.

He also congratulated Higgs on his victory, but pointed out the party's security officers removed him from the convention hall earlier in the day.

"The first thing out of his mouth is that he is going to do politics differently, but he threw me out of the convention floor," Arseneault said.

Arseneault also said he does not believe Higgs has been able to expand the party's base out of southern regions of the province during the leadership race.

He said Higgs will now have to defend all his tough talk from his days as finance minister.

"For the last six years, his reputation has been about cut, cut, cut. He has never talked about opening up opportunities for the province, it was always doom and gloom," Arseneault said.

The three candidates who dropped off the ballot quickly began moving to other camps.

After finishing in seventh position, Dubé announced he was backing Higgs, who called his lead on the first ballot "humbling."

The Quispamsis MLA said after the first ballot that he hoped his campaign's message was resonating.

Barley could not pull into second place in the latest ballot despite picking up support from Macdonald and Stewart after the first ballot.

Stewart said he chose to back Barley as she was the only one who would listen to him on controversial language issues.

Stewart has been openly critical of Katherine D'Entremont, the commissioner of official languages, during his leadership campaign.

Barley was asked whether she thought the languages commissioner should be fired.

"What I can say is that the language commissioner should be a position that is bringing us together, and she's not doing that and we have to rectify that," Barley said.

The main venue of the leadership convention was Fredericton, however, there were satellite voting stations set up in Moncton, Saint John, Bathurst and Saint Leonard.

The leadership race began when former premier David Alward resigned after his government was defeated by Brian Gallant's Liberals in 2014.

The Liberals have 26 seats in the legislature, the Progressive Conservatives have 22 and there is one Green MLA.