If you have a hoard of plastic bags shoved inside a cupboard in your home, a Rothesay woman will gladly take them off your hands. Renee Outhouse is crocheting plastic sleeping mats for people who are homeless, just as Fundy Region Solid Waste plans to stop accepting plastic bags for recycling.

'This is one small way just to try to help keep them a little bit warmer,' says crocheter

If you have a hoard of plastic bags shoved inside a cupboard in your home, a Rothesay woman will gladly take them off your hands.

Outhouse said it's a chance to reuse the plastic bags and make a small difference for people who are forced to sleep in the cold every night.

"When I first started this, it was just a side thought. I said, 'Hey this would be something cool to do with the plastic bags and reuse them so there's not as much waste.'"

About 500 people across the province are homeless.

Around 90 people are homeless in Saint John, 45 of whom are chronically homeless.

"This is one small way just to try to help keep them a little bit warmer," Outhouse said. 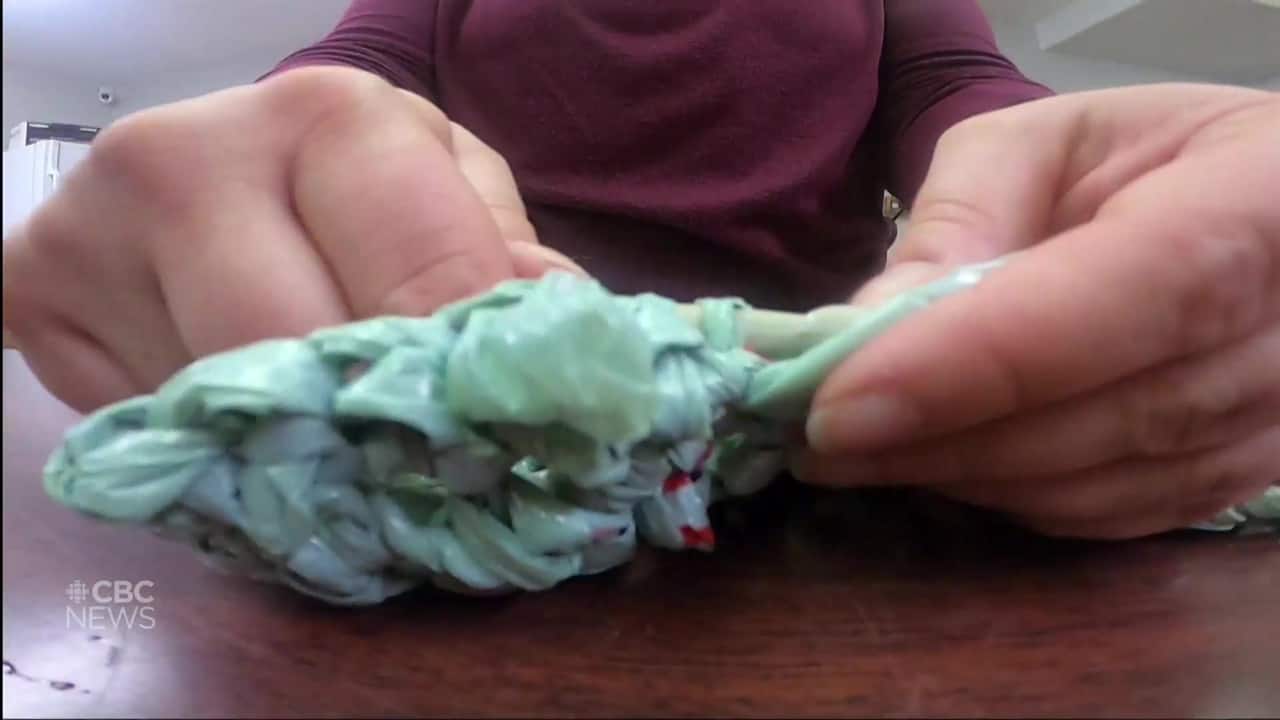 12 months agoVideo
1:10
This Rothesay woman crochets plastic bags together to make sleeping mats for people who are homeless. 1:10

Outhouse came up with the idea of crocheting bags together when she was scrolling through Facebook after putting her son to bed.

She saw a post about a group called the Bag Ladies, whose members crochet plastic bags together for the homeless in the United States.

"I wanted to do something that was different and I'm always looking for ways to reduce my waste and recycle and reuse as much as possible," Outhouse said.

How the mats are made

Outhouse folds the bags into quarter strips, cuts off the handles and the ends that keep the bags together, then cuts the bags into tiny strips and crochets them together.

"Once I start to crochet after I've cut the strands, it's very quick," Outhouse said.

"It's cutting the strips and folding the bags and getting them ready that actually takes the most time."

The mats will be about a metre wide and two metres long.

Because the mats are made of plastic, fleas or bedbugs won't nest in them, Outhouse said. The mats would melt if exposed to fire, however.

Along with asking for plastic bag donations, Outhouse is also looking for volunteers to help speed up the process.

Her goal is to crochet 10 mats for the homeless this year.

Planning for next year

"I think we could double that at least," she said, adding she'd like to build up a surplus for next year too.

She asks that donated bags be clean and in good condition before they're dropped off.

After the 10 mats are crocheted together, she'll drop them off at shelters in the Saint John area and hand them out to people who are living outdoors.

Outhouse said she plans to continue making the mats next year as well.

With files from Elke Semerad