Pinchy can now relax. The rare orange lobster has been living in the tank at a Fredericton Sobey's store on Prospect Street since he turned up in a seafood order last March.

The Huntsman Marine Science Centre has adopted the colourful crustacean, which will be housed at the aquarium 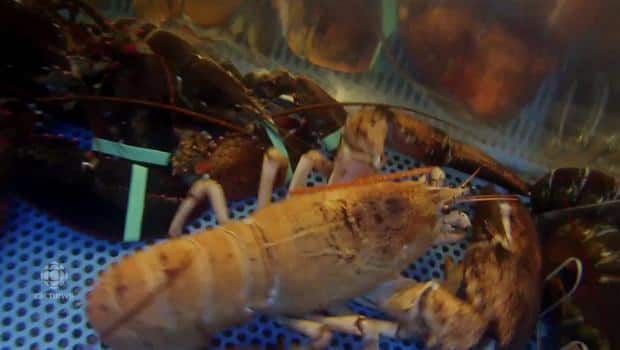 Pinchy can now relax. There is no chance he will wind up at the bottom of a lobster pot.

On Tuesday, the rare orange lobster was officially adopted by the Huntsman Marine Science Centre in St. Andrews.

Pinchy had been living in the tank at a Fredericton Sobeys store on Prospect Street since he turned up in a seafood order last March.

Store manager Paul Cudmore says Pinchy caused quite a stir when he arrived, and not just because of his unusual colour.

"Our seafood manager … did a little research and he found out that he was one in 10 million of having that type of pigment."

What's a store to do with such a rare crustacean?

Make him a celebrity, of course.

The seafood counter became Pinchy Central, with a name tag on the lobster pound and kids' colourful renderings of the lucky lobster on the walls.

"I think he became more of a mascot around the store," said Cudmore. "He's been a hit here with all the children and the customers that come into the store."

There have been a few offers to buy Pinchy, but Cudmore says, "we wouldn't let him go."

And that's where the Huntsman Marine Science Centre came in.

"We wanted to find a more permanent home for Pinchy," said Cudmore.

Reba McIver is the marine debris program co-ordinator at the Huntsman. She came to Fredericton on Tuesday prepared to transport Pinchy to St. Andrews in style.

"We've got a nice styrofoam box filled up with some seaweed in there," she said.

When they get to St. Andrews, Pinchy will join a special crustacean club with a rare blue lobster and a few others, in tanks designed specifcally for their needs.

"These tanks are actually fed with water directly from the Bay of Fundy," said McIver, "so it's like he's right in the marine environment."

When the Hunstman Marine Science Centre opens over the March break and again through the summer, anyone will be able to visit Pinchy in his new digs.

'We hope he's with the Huntsman a very long time," McIver said.

At the Sobeys store, Paul Cudmore said everyone will miss Pinchy.

"We're kind of sad to see him go, but we're very excited that he's going to have a nice, safe home."