The Canadian Association of Petroleum Producers says a go-slow approach to shale gas development in New Brunswick could deter the industry in the province.

Investors may move on if they can't move quickly 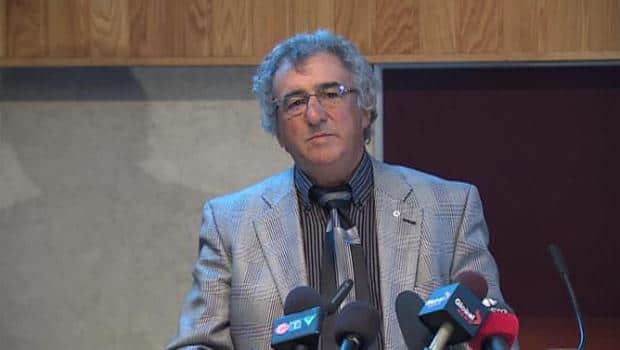 8 years ago
2:31
Louis LaPierre released his report on the shale gas industry in New Brunswick on Monday with several recommendations 2:31

The Canadian Association of Petroleum Producers says a go-slow approach to shale gas development in New Brunswick could deter the industry in the province.

A report released Monday by the provincial government recommended a phased-in approach to developing the contentious shale gas industry in New Brunswick.

Louis LaPierre, a professor emeritus in biology at the University of Moncton, suggested the provincial government choose two or three sites for hydro-fracking research and development, where regulations could be tested for their effectiveness.

Paul Barnes, the manager of CAPP for Atlantic Canada, said he needs to get clarification on that point before he can comment on whether the oil-and-gas lobby group can live with the report as a whole.

Industry players who are ready to invest if they find shale gas might decide not to if they can't move quickly, he said.

Still, "at first glance, it appears to be a fairly balanced report," Barnes said.

He likes the emphasis on a science-based approach, he added.

Barnes declined to comment on the report by the province's chief medical officer of health, also released Monday.

He said he needed time to review the report more thoroughly and to get more details at a news conference scheduled for Tuesday.

She recommended requiring a health impact assessment and monitoring the health of the population on an ongoing basis to detect adverse impacts.

The cost of implementing her recommendations could be absorbed by the industry, she said.

"Let the science speak for itself. When we get to the end of that time period, you'd be able to know whether it's feasible to move forward on a larger scale," he said.

Leonard also said he likes LaPierre's suggestion that New Brunswick has an opportunity to take the lead in research by establishing an academic institute to study risk using scientific standards.

The provincial government would welcome more independent information, he said.

"A lot of this this information is not peer-reviewed. It's coming from one side of the issue or another. And that's what we need is peer-reviewed information so we can all agree on a set of facts and once we have those facts, we'll know how to base the industry going forward — if it's possible to do it at all," Leonard said.

Regardless of the reports' recommendations, the Opposition Liberals will continue to push for a moratorium, said Interim Leader Victor Boudreau.

"With all the respect I have for Dr.  LaPierre, this is not a research project, this the commercial exploitation of shale gas that's occurring in the province of New Brunswick," he said.

"When you consider the fact that the number one concern of the public is government integrity on this file, it tells me that a moratorium needs to be in place."

Green Party Leader David Coon said he agrees that the provincial government should impose a moratorium on the industry.

"We believe that you can't make shale gas and fracking safe with regulations. And besides, it's a fossil fuel. And he seems to have forgotten we have a climate crisis."

NDP Leader Dominic Cardy said he agrees with LaPierre's recommendation to establish an independent shale gas exploration research body, to involve the Energy and Utilities Board, and develop a risk assessment model.

But he's still calling for a legislative ban on shale gas, he said.

"Our doubts stem from the demonstrated inability of the Alward government to abide by [the rules]," Cardy said in a statement.

"The Alward government broke its own wetlands regulations in May 2011, and has failed to acknowledge that provincial pension investments in tobacco violate international law.

"A regulatory regime is not worth the paper it is printed on if it is ignored by the very people who should enforce it," he said.

"Until the members of the Legislature can state with full confidence that they have reviewed each shale gas proposal and are certain that it meets the regulations that already exist, no shale gas development should proceed."

Stephanie Merrill, the fresh water program co-ordinator for the Conservation Council of New Brunswick, said citizens have already said what they want.

In May, the provincial government introduced 116 proposed changes to the regulatory framework that oversees the oil and gas industry.

The new provincial regulations will set out stricter rules on protecting the environment, Natural Resources Minister Bruce Northrup has said.