Neighbours and organizations in the Petitcodiac area are rallying to help a young mother whose house was destroyed by a wildfire in the area earlier this month. 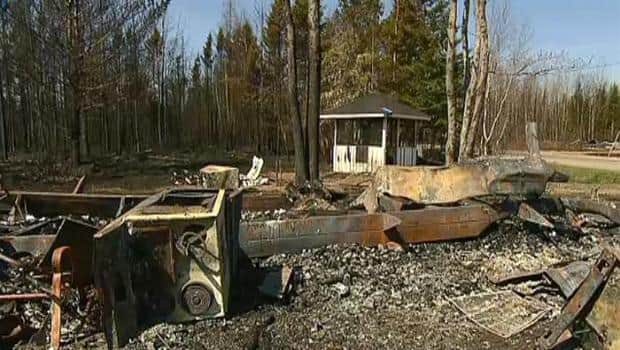 7 years ago
2:06
A Moncton-area family that lost everything in last week's wildfires is getting help rebuilding their home from neighbours 2:06

Neighbours and community groups in the Petitcodiac area are rallying to help a young mother whose house was destroyed by a wildfire in the area earlier this month.

A major fire destroyed 150 hectares of forest a week ago and left two houses in ruins.

Kayla Riley’s house was one of those homes that stood in the way of the raging fire and is now a heap of twisted and charred scrap metal.

Riley, a young mother who is six months pregnant, said she could see the fire coming closer to her house.

"I kept telling myself it wasn't going to burn," she said.

"It makes it difficult when my daughter wants to go home. She says it almost every day."

Riley is on social assistance and she's trying to get help through New Brunswick Housing. In the meantime, the two are staying with her father in a Dieppe apartment.

While she works on getting a new place to live, people in the Petitcodiac area are stepping in to help her with household items.

On Wednesday, Debra Killam and Florence Goodard were sorting through boxes of goods that had already been donated.

The Second North River Baptist Church holds a yard sale every year to help needy people in the community. This year, some of the items will go to help those who lost their homes in the fire.

Killam said a few items have already come in to help Riley.

"There's $500 towards her rent has been raised, there's also a few things like a crib that's been donated and a mattress," she said.

"But she needs a lot more help. She needs a place to stay, a place to live and she can't continue living where she is."

The community yard sale will be held Thursday and Friday on Homestead Road and there is also a music night planned for later in the month.

And Killam is collecting money for fire victims at her booth at the Moncton Market.

Florence Goodard said every little bit that comes in will help Riley.

"Cash would be good at any time for anything really," Goodard said.

"But they just need to know that the people are around them and giving them all the support they can. And as far as what they need — everything," Goodard said.