Progressive Conservative Leader Blaine Higgs hopes for a faster than normal transition if given the chance to govern because there are too many issues for New Brunswickers to be left without a legitimate government for too long.

New Brunswick Progressive Conservative leader Blaine Higgs says he's hoping for a faster-than-normal transition if he gets a chance to form a new provincial government later this fall.

Higgs said there are too many issues including carbon taxes, softwood lumber tariffs, and slow compensation payments to spring flood victims, for New Brunswick to go too long without a legitimate government.

"Our goal would be to minimize that [transition] timeline, and I know that it's normally two weeks," he said. "I think we can shorten that."

He said he has told civil servants in transition briefings that he aims to have a potential cabinet and Throne Speech ready if Premier Brian Gallant's Liberal government loses a confidence vote after the legislature resumes.

The provincial election ended on Sept. 24 with no party holding a majority of seats in the new legislature.

Gallant's incumbent Liberals won 21 seats, one fewer than the PC party's 22 seats. But Gallant said he will try to win the confidence of the legislature with the support of the Green party when the assembly convenes Oct. 23.

Debate on a Liberal Throne Speech would normally take six regular sitting days, with a vote on whether to support the speech, in effect a confidence vote on Gallant's government, likely on Nov. 2.

The opposition could also introduce a non-confidence motion, but the earliest date for such a vote would only be a day earlier, on Nov. 1. If the Liberals lost either vote, a transition to a new government would normally take about two weeks.

The delay comes with several major issues facing the province. The civil service is now in "caretaker" mode, continuing to administer basic services to the public without making any major decisions or adopting any new policies. 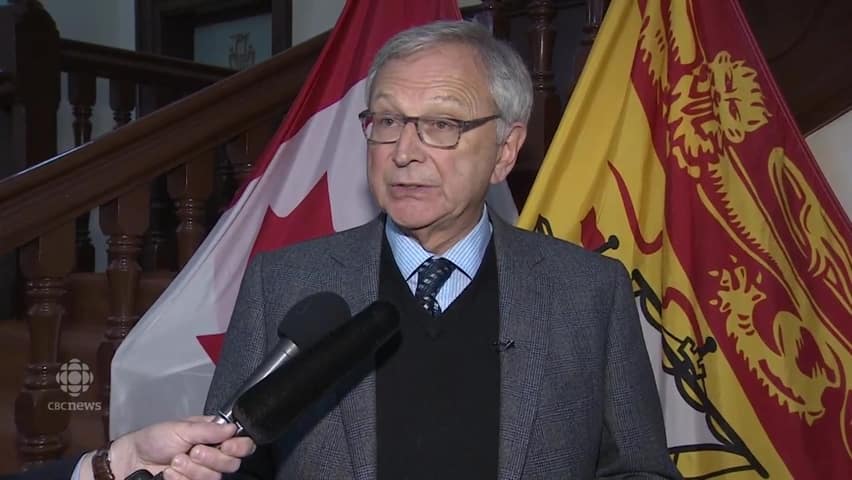 'I will be busy this week preparing to form the government'

2 years agoVideo
1:03
Higgs says there are too many issues, including carbon taxes, softwood lumber tariffs, and slow compensation payments to spring flood victims, for New Brunswick to go too long without a legitimate government. 1:03

The caretaker period usually runs from the start of the election campaign until a new government is sworn in. But that might not happen until mid-November.

Meanwhile, the Trudeau government will rule this fall on whether the existing provincial Liberal carbon-price plan meets national standards.

To change the system, a PC government would have to pass legislation to amend the law. And to join a legal challenge to the federal plan, the province must file court documents by Nov. 30.

At the same time, officials are moving ahead with plans to roll out more early learning centres in southeast New Brunswick in December under the Liberal government's Early Learning and Child Care Action Plan.

Higgs said Tuesday he doesn't object to that going ahead.

"If they are budgeted items, and they were scheduled to be done this year … there isn't a reason for it to be stalled," he said.

"So I would suggest the schedule should be moving along as originally anticipated. We have to keep running the province and those things are already approved to move forward."

But a leading expert in public administration and governance, Donald Savoie of the University of Moncton, said the province should put the new early learning centres on hold.

"My advice would be no," he said. "It shouldn't continue. Don't handcuff the next government. Don't pursue the policies and priorities that the outgoing government has.

"You should never handcuff the next government until the legislative assembly has given legitimacy to the government."

Higgs says it's taking too long for some victims of the spring flood of the St. John River to receive compensation. He added a legitimate government would be able to push officials to speed up the process.

"There just doesn't seem to be the same sense of urgency that people are facing in their daily lives," he said.

Higgs also said work needs to start soon on amending the Crown Lands and Forests Act, which he promised during the campaign, so that New Brunswick can win back its exemption from U.S. softwood lumber tariffs.

The PC leader said Gallant can eliminate the uncertainty by resigning now and allowing the PCs to be sworn in quickly.

"Is Mr. Gallant really going to go through the spectacle of delivering a Throne speech and all of us partaking [in it] up to six days of debate?"