Parts of shale gas health report will now be released

The Alward government now says it will release at least parts of a report by the province's chief medical officer of health on the potential health impacts of the shale gas industry, but not right away.

Government officials still won't say how much or when 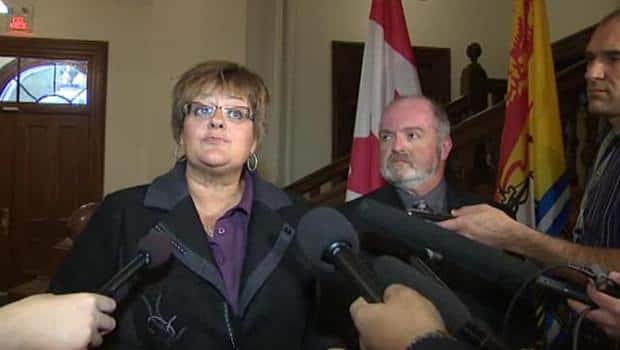 8 years ago
1:51
The Department of Health will release the recommendations from Dr. Eilish Cleary's report on the health impacts of the shale gas industry 1:51

The Alward government now says it will release at least parts of a report by the province's chief medical officer of health on the potential health impacts of the shale gas industry, but not right away.

On Tuesday, Department of Health officials would not commit to releasing Dr. Eilish Cleary's recommendations on how to minimize the negative effects of the industry on people's health, which outraged the Opposition Liberals.

"When you're talking about people's health, the health care system, people need to have that information free of political bias," said health critic Bill Fraser.

"It needs to be basic information that comes from a professional, like Dr. Cleary."

Former health minister and current Liberal leadership candidate Mike Murphy went even further, citing his own time at the department.

"It was clearly understood that if there were a question about whether information was to be divulged, concerning public health, food, water, safety, it was [the public health officer's] decision," he said.

Recommendations will be made public

Health Minister Madeleine Dubé and Environment Minister Bruce Fitch told CBC News Murphy is correct about Cleary's independence, but that only applies to imminent public health threats, such as pandemics.

The shale gas health report is part of a larger government process, they said.

Still, by late Wednesday afternoon, the two ministers announced the recommendations in Cleary's report will eventually be made public, although they did not say when.

In addition, anything that overlaps with other current studies, such as a report by Prof. Louis LaPierre on his public consultations regarding proposed rule changes for the industry, may not be released, said Fitch.

"They may find that, `I'm going over some of the path you went over,' so there's no sense in continuing to put that out, and it may just cause some confusion," he said.

The uproar surrounding the Alward government's refusal to release the shale gas health study is the third secrecy controversy to hit the Progressive Conservatives in the past few days.

On Monday, an advocacy group for Canadian newspapers gave the provincial government a failing grade on its handling of Right to Information requests.

And on Tuesday, the province's information and privacy commissioner criticized the government for holding a review of the province's Official Languages Act behind closed doors.

When David Alward was elected premier two years ago, he promised there would be no secrets.

Alward had vowed to always keep voters informed on everything.

"Government has got to change the way it interacts with the people," he said in May, 2010, leading up to the election.

In fact, he laid out an extensive plan for what he called citizen engagement with the core commitment of fully informing and consulting citizens on all issues.

"We've got to get people more involved in decisions that affect them," Alward had said.

His theme of openness continued after the election.

"We need to be a society that engages, informs, educates our citizens," he said in October, 2010.

"We know New Brunswickers want to be involved in the big decisions," Alward said following a think tank session in Moncton.

During his first State of the Province address, he said he had learned an important lesson from Graham's NB Power mistakes.

"Don't take the people for granted and don't leave them out of the process of decision making. Absolutely."