Jerry Clarke is pondering divorcing his wife of 52 years to deal with a monthly increase of $700 to pay for his wife's care in a nursing home in Fredericton, but the province says couples in need don't have to split to cover such costs. 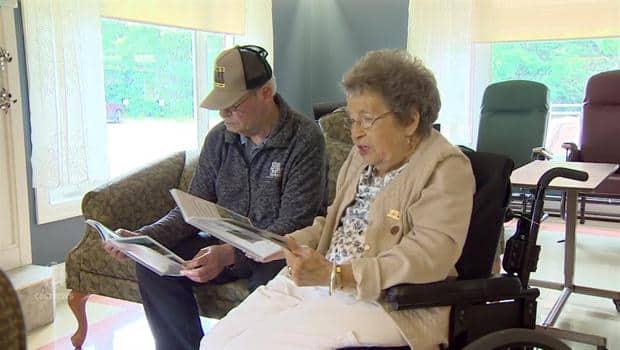 Jerry Clarke is pondering divorcing his wife of 52 years to deal with a monthly increase of $700 to pay for his wife's care in a nursing home in Fredericton.

"There are no options," said the 75-year-old Oromocto, N.B., man, who is trying to get by on his military pension.

"You pay it," he said about the extra nursing-home cost. "What happens to you doesn't seem to matter."

Clarke said he pays more than $2,700 a month to the Pine Grove Nursing Home for the care of his wife. He said that's an increase of nearly $700 over what he paid last winter, and he doesn't have enough left over to cover his own living expenses and maintain his marital home.

So he's starting to think the only way out is divorce, because then his pension wouldn't be factored into her nursing-home fees, and they would be based on her individual income and not the couple's.

"My wife's mental faculties are better than mine," he said. "And I'm sure it would be hurtful and very upsetting to her. But it's [divorce] something that, again, is a last resort."

Kenneth Campbell, a retired teacher in Plaster Rock, N.B., said he was granted a divorce in January, after struggling to pay the nursing-home costs for wife Judith while also supporting himself at home.

"My wife was concerned about the whole thing, but it happened.  We met with a lawyer. We signed on the dotted line. It was OK'd by a judge."

Campbell said he still visits his wife every day, but is no longer obligated to pay any portion of her nursing-home fees and no longer on the hook for her medicine.

He said it was the only way he could manage.

"Now my pension isn't touched. All of hers goes to her. And the government subsidizes what is needed," said Campbell.

The provincial government, however, said the cost of keeping a spouse in a nursing home shouldn't drive a couple to divorce.

"No couple needs to legally separate to maintain the cost of the spouse living at home," said an email to CBC from the office of Sheila Lagacé, manager of media relations in the Executive Council Office.

Where a client faces serious financial hardship, due to nursing-home contributions, he or she can apply for temporary relief, the province said.

Retired New Brunswickers with spouses in nursing homes have raised this issue before.

In 2003, Elizabeth Martin, Rachel Bourgeois and Bonnie Hayward said they couldn't afford the costs of keeping their husbands in care.

No couple needs to legally separate to maintain the cost of the spouse living at home.- Sheila Lagace, executive council office

On the steps of the legislature, Martin declared she was prepared to file for divorce because she feared the province would take her assets.

In an interview this week, Martin said her husband died in 2003 and Bourgeois's husband has also died.

Bonnie Hayward told CBC news this week she couldn't bring herself to split from her husband, even just on paper.

In 2006. the Shawn Graham Liberal government removed seniors' homes, assets and life savings from the calculation of nursing-home fees.

But a couple's collective net income remained part of the equation.

In 2009, Judy MacKenzie announced her plan to separate from her husband of 45 years because she said she couldn't afford the $700 a month required as her contribution for his care in the Mount St. Joseph Nursing home in Miramichi.

CBC News was unable to reach her family for an update.

According to the Department of Social Development, the amount of standard family contributions is based on a client's net income when the person is single, widowed, separated or divorced.

But they're based on a couple's net income when the person is married or in a common-law relationship.

The provincial government defines hardship for the spouse who remains in the marital home as the inability to pay for adequate food, monthly mortgage or rent, sufficient home heat, and prescribed medication and health care.

Clients in this position can request a temporary client contribution adjustment.

It's unclear how many people have successfully argued for this relief or how long they were granted it.

PLEIS said it doesn't have enough information from Social Development to make those updates.

"There's a lot of myths, and misconceptions and worry," said spokeswoman Deborah Doherty.

"And information is empowering."

Doherty said she's concerned about seniors making decisions based on misinformation and that could put themselves at risk.