New Brunswick flooding to continue for 'at least' 5 days, state of emergency not ruled out

New Brunswick Premier Brian Gallant says he has not ruled out declaring a state of emergency or calling in the army to assist with unprecedented flooding in the province, which is expected to continue for at least the next five days.

New Brunswick Premier Brian Gallant says he has not ruled out declaring a state of emergency or calling in the army to assist with unprecedented flooding in the province, which is expected to continue for at least the next five days.

He made the comments Saturday in response to criticisms as floodwaters continued to rise in the southern part of the province, forcing more than 800 people from their homes and closing roadways, including the Trans-Canada Highway between Fredericton and Moncton, and Route 10 in Chipman.

Gallant said he did call in the Canadian Coast Guard earlier this week, which equates to requesting naval support.

"But we are going to listen to the officials and the experts that are saying that at this point they feel the resources we have with the Canadian Coast Guard support is exactly what we need to keep people safe."

The flooding is already into its second week and once water levels stop rising, the water likely won't recede for several days.

The Canadian Red Cross has announced an appeal for donations to support ongoing relief efforts, long-term recovery, resiliency and preparedness. Anyone interested in donating can call 1-800-418-1111 or visit www.redcross.ca.

On Saturday, the St. John River swelled to 5.5 metres, well above the flood stage of 4.2 metres, and emergency officials warn the flooding is expected to get worse along the southern regions with rain in the forecast and continuing spring melt. 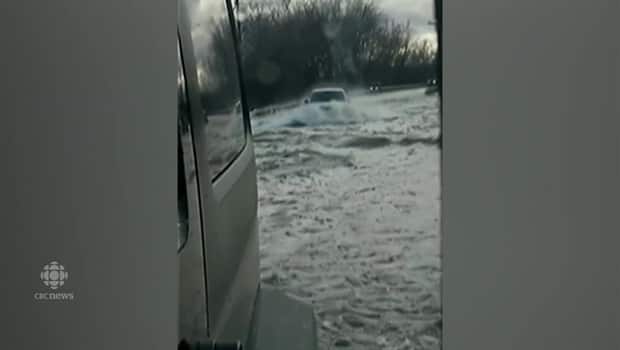 "There's areas where there's still time for people to self-evacuate safely on their own over open roads, but they'll need to make that decision soon in many cases because we continue to have road impacts and closures," he said.

Anyone who hasn't taken any precautions "should be now seriously considering evacuating," because there are reported instances of people running out of critical supplies, he added.

As of Saturday afternoon, 851 people from across the province had registered as evacuees with the Red Cross. All evacuees are urged to register, even if they don't require assistance.

EMO doesn't want to direct responders to locations to check on people who have already left, said MacCallum. The information is also helpful when it comes to disconnecting power in homes threatened with flooding.

High winds Saturday have further complicated flood response, whipping up waves in already high water and causing floodwaters to gush over some of the estimated 350,000 sandbags distributed, resulting in additional damage to property and possessions.

The winds, which are gusting up to 70 kilometres an hour in some areas, are affecting rescue and evacuation efforts, particularly in the Grand Lake region, where boating is increasingly difficult in the choppy conditions, he said.

Some road barricades have also been knocked down or blown away, said MacCallum, urging motorists to be extra vigilant until crews can anchor down the barricades or replace them.

Up-to-date road closure information is available on the Department of Transportation's 511 website.

NB Power was reporting nearly 7,000 customers still without electricity across the province, as of 9:50 p.m. AT, due to broken branches and trees coming into contact with power lines and infrastructure.

The outages are widespread, but the bulk of them are in the Moncton-Riverview-Dieppe area, where more than 5,000 homes and businesses are without power.

No estimated restoration times are available, but crews are working to get customers back online as soon as possible and the utility is hoping to bring in extra crews from other provinces.

Keith Laidlaw, deputy superintendent of environmental response for the Atlantic region, said crews will be patrolling the area and offering assistance, including evacuations.

Two boats, when not involved in evacuations or providing support ot emergency operations, are devoted to assisting Darlings Island residents, whose only road to the mainland has been blocked for days.

Fisheries and Oceans Minister Dominic LeBlanc, who is the minister responsible for the coast guard, said a total of seven vessels have been deployed and at least another seven are on standby.

Fisheries conservation and protection officers will also be providing patrol services to help alleviate concerns of people forced to leave their homes.

The premier announced on Thursday that the province had enlisted help from the Coast Guard during the worst spring flood in more than 80 years.

Environment Canada has issued a special weather statement that's in effect for New Brunswick this weekend.

Another weather system will approach the region late Sunday evening. Environment Canada said between 10 and 20 millimetres of rain is possible for the southern part of the province.

This comes after New Brunswick saw up to 30 millimetres of rain and scattered thundershowers over central areas overnight.

"Due to the generally saturated soil conditions for most of the province, and remaining snowpack in the northern part of the province, last night's rainfall and the additional rain expected Sunday night could cause water levels to rise or at least stay constant into early next week," the weather agency said in a statement.

Water levels in the Fredericton and Maugerville area are forecast to remain relatively stable at around eight metres, or 1.5 metres above flood stage, for the next two days. They could then "start to slowly decline," said Jasmin Boisvert, a water resources specialist with the Department of Environment and Local Government.

In Jemseg, the water is expected to rise to about 6.8 metres from the current 6.6 metres and before starting to decline around the fourth day, he said.

Similarly, levels in Grand Lake are predicted to reach 6.9 metres and then start to decline around the fourth day.

In the Sheffield-Lakeville Corner region, the forecast indicates water levels will stay stable around 6.9 to 7 metres and start to decline on the fourth day. 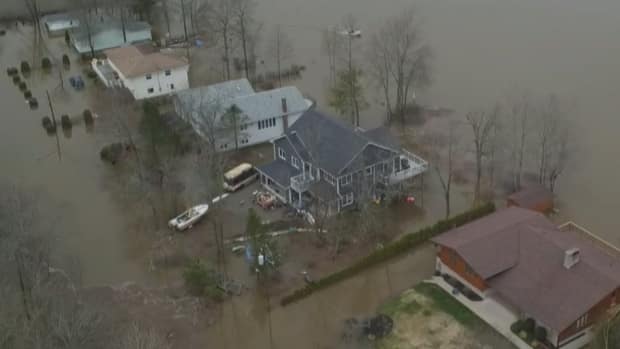 3 years ago
1:26
Shots taken over Grand Bay-Westfield by the CBC News Drone 1:26

Water levels in Oak Point are forecast to rise to six metres over the next 48 hours and then start to decline a few days later.

Meanwhile, the Quispamsis-Saint John area is expected to hit 5.8 metres over the next two or three days and then start to decline.

"These forecasts are subject to change depending on upcoming day-to-day weather," said Boisvert. "Four days is long ways off and a lot can change in the meantime."

He also stressed the declining floodwaters "will not disappear overnight.

"It will take several days or longer before waters levels recede below flood stage so please plan accordingly."

'Mother Nature … has a mind of her own'

​Officials urge anyone in communities such as Grand Lake, Jemseg, Gagetown, Hampstead, Belleisle, Oak Point, Grand Bay-Westfield, Quispamsis and Saint John to be on high alert.

"Right now, keeping people out of harm's way is the priority," the premier said on Saturday morning. "Mother Nature … has a mind of her own and we'll have to deal with what comes at us."

Gallant encouraged people to be vigilant and leave their homes, stay with family and friends and avoid closed roads.

"This is a flood we have never seen before," he said.

Earlier this week, Saint John issued a voluntary evacuation notice affecting about 2,000 residents in several neighbourhoods, and the province on Friday encouraged people to leave their homes before the weekend.

"Anyone who's not acted to take necessary precautions should prepare and heed warnings from local officials, including those in at-risk areas that have never experienced flooding," said Shawn Berry, spokesperson for the New Brunswick Emergency Measures Organization.

Roads closed because of flooding

Saint John EMO officials had warned Friday night that they might have to close all of Westfield Road on the city's west side, affecting about 1,400 residents. But they announced Saturday afternoon that city crews, with help from Galbraith Construction, are in the process of temporarily building up the road near Mellinger Crescent in order to keep it open.

Randolph Bridge, however, has been closed to all through traffic. Police are stationed at the barricade.

The Trans-Canada Highway between Fredericton and Moncton, which was closed in both directions Thursday shortly after 7 p.m., is expected to remain closed until early to mid-next week.

Motorists will be detoured to Route 1 at River Glade and to Route 7 at Oromocto.

More than 140 provincial roads, bridges and culverts have been affected by flooding, including about 80 road closures.

With files from Matthew Bingley