Premier Brian Gallant’s minority Liberal government has been defeated in a confidence vote in the New Brunswick Legislature, setting the stage for Progressive Conservative Leader Blaine Higgs to be sworn in as premier in the coming weeks. 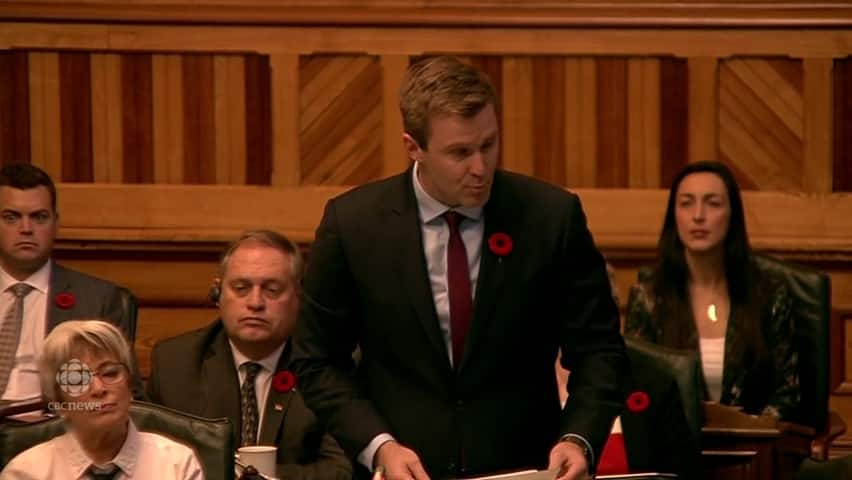 Premier Brian Gallant's minority Liberal government has been defeated in a confidence vote in the New Brunswick Legislature, setting the stage for Progressive Conservative Leader Blaine Higgs to be sworn in as premier in the coming weeks.

The house voted 25-23 for a throne speech motion amended by the PC Opposition to declare no confidence in the government.

Earlier, a Liberal sub-amendment to the PC amendment, adding a new list of promises to the speech, was defeated by the same margin.

The PC no-confidence amendment then passed as written and was incorporated into the main motion.

The three votes followed a final speech by Gallant in which he took responsibility for a fragmented legislature and made a final plea for one PC or Alliance MLA to break ranks.

"One person can literally change the course of history for our province," he said.

​The speech was dotted with mea culpas from Gallant: "I'm sorry for not doing better over the last four years to unite our province," he said.

Gallant said he should have talked more about the benefits of official bilingualism, and should have acknowledged as well that some New Brunswickers believed they were losing out because of it.

The election resulted in a fractured electorate split along language and geographical lines, he added, but also an impetus for parties to try harder to collaborate.

"If not, we risk dividing our province more than ever before," he said.

He later told reporters the speech was "definitely the hardest speech I've ever delivered."

Gallant said it's too soon to decide whether he'll stay on as Liberal leader and leader of the Official Opposition in the legislature, but he added he'll make that decision soon.

The Liberals' defeat in the legislature represented the climax of an inconclusive Sept. 24 election in which no party won a majority of seats and two relatively new parties took three each.

The Liberals captured 21, one fewer than the PCs, and exercised their right under British parliamentary conventions to try to govern.

That required being able to win the confidence of a majority of MLAs — something they scratched and clawed to obtain in the five weeks after the election.

Gallant also said he had become "too jaded and fell into some of the old adversarial ways of this place" during his years as premier.

He said he would not compromise his stance on constitutional rights to stay in power, citing his decision to eliminate regulations restricting access to hospital abortions and the fact he was the first premier to march in a Pride parade.

Gallant also pleaded a final time for opposition MLAs to support the throne speech, which he defended as a genuine attempt to incorporate their ideas — and which the Tories have derided as a shameless attempt to buy support.

Despite Gallant's plea, the PCs and the Alliance voted against it.

A visit (or 2) to Government House

Once the final vote was read out in the legislature, Gallant stood to accept defeat.

"I will go see the lieutenant-governor at her earliest convenience to inform her that I will be resigning as premier, and I will humbly suggest to her honour to allow the leader of the Conservative Party to attempt to form a government and attempt to gain the confidence of the house," he said.

"All members from our caucus wish the leader of the Opposition and his team the best of luck. Their success will be New Brunswick's success."

Higgs and Gallant will have to meet and agree on a date for a transition — the day a PC cabinet would be sworn into office.

"It's been a long, long journey," Higgs said after the house adjourned.

He and Gallant shook hands as the sitting day ended. "He said, 'I want to work together,' and I said the same thing,'" Higgs told reporters.

"I think we have to put the past behind us … because I'm sure there are areas where we have common ground and we have to find them. So I'll be looking."

Higgs said he considered the vote to be a sign that a PC minority government will win the confidence of the house and said he will try to work with all parties.

"We have to set some big lofty goals for our province and achieve them, not talk about them, but achieve them," he said.

He said he hopes to swear in a cabinet next week, with a throne speech by Nov. 20, and to see his government last four years.

"We're going for the gold."

People's Alliance Leader Kris Austin said he'd work with Higgs "in the areas we agree on," and reiterated his promise to support a PC government on confidence votes for 18 months.

But he said that's contingent on some "give and take," including in the upcoming PC throne speech.

Austin said the party would decide how to vote "bill by bill" on other legislation.

"Some bills will get passed, some bills maybe we won't," he said.

Green Leader David Coon said he would now start working with the Tories to try to ensure his party's issues are on their agenda.

He said he was impressed by the "contrition" Gallant showed for issues he'd handled badly as premier.

"I think it was an important thing that he acknowledged that," Coon said.

Higgs also applauded Gallant's speech, which he said "came from the heart."

But he added the sentiment should have been there during the last four years, not just "in the dying days of a government."

The PC leader and premier-designate admitted that he was "impatient" during the five weeks of uncertainty since the election but ultimately came to understand that he had to let the parliamentary process play out.