A New Brunswick government commissionaire says he feels he was treated unfairly when his hours were reduced after a language complaint.

A Liberal cabinet minister is now questioning the handling of a bilingualism investigation by the province's official languages commissioner.

Katherine d'Entremont launched an investigation in May into how the provincial government ensures bilingual service from commissionaires, who provide security at some government buildings.

Her decision prompted the provincial government to cut one unilingual commissionaire's hours.

D'Entremont has been criticized for not revealing at the time that she was initiating the investigation herself after her own encounter with the commissionaire.

Instead, d'Entremont's letter to the provincial government in May referred to "a complaint filed recently with our office" and included a notation that she was copying the "complainant" in the case.

Cabinet minister Donald Arseneault, the Liberal government's spokesperson on language issues, told CBC News it was "kind of an awkward situation and it is kind of bizarre as well" that d'Entremont created the impression someone else complained.

"I don't want to speak on behalf of the commissioner. I think she's more than capable of doing that. But there's no doubt, the optics really look strange, if that's the case," he said.

D'Entremont has repeatedly refused interview requests about the May 6 incident.

The law allows d'Entremont to launch an investigation on her own, without a complaint.

She said in a written statement to CBC News the law doesn't require her to specify when she's doing it on her own initiative.

Arseneault wouldn't discuss the specifics of the incident that prompted d'Entremont's investigation, nor why commissionaire Wayne Grant's hours were cut before d'Entremont finished her investigation and made recommendations. 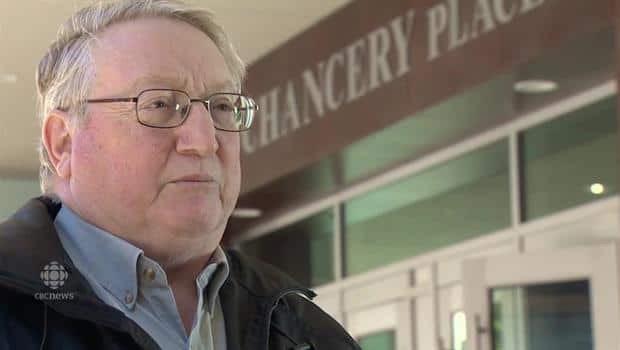 5 years ago
1:05
Commissionaire Wayne Grant had his hours cut back after the provincial government received a language complaint 1:05

'I told her I was not bilingual'

Grant, a 64-year-old commissionaire planning to retire next April, was filling in at the main desk at Chancery Place, the downtown Fredericton building that houses central government departments and the premier's office.

The regular commissionaire was away for training.

"A lady walked up to the counter, the desk where I worked, and spoke to me in French," Grant told CBC News in his first media interview about the incident.

"I told her I was not bilingual. She immediately said, 'That's too bad.' After saying that, she continued our conversation in English."

Grant said he would have called in a bilingual colleague, but he took the woman's switch to using English to mean she wasn't insisting on service in French.

The Official Languages Act gives people the right to communicate with the government and receive services in their choice of English or French. It also says the government, or third-party contractors it hires, has to take "appropriate measures" to tell people they have that choice.

"It is the procedure ... to advise the person that you are not bilingual and you will get a French interpreter for them," Grant said.

"However, I didn't see the need because the lady in question immediately switched over to English."

Three weeks later, d'Entremont wrote to the Department of Transportation and Infrastructure, which contracts the commissionaires, to ask what policies were in place for bilingual service.

The letter referred to "the complainant" not getting service in French on May 6.

Not long after the letter, Grant was told he could no longer fill in at Chancery.

A month later, he was taken off front-desk duty at the Centennial Building across the street as well.

His seven-days-on, seven-days-off shift was reduced to alternating weekends and parking lot duty every Thursday for a medical clinic in the Centennial Building.

"I don't think it should cost a person a job when they can't respond, especially when you have other means available to satisfy the problem that's going on," Grant said.

Grant plans to retire next spring when he turns 65 and can collect the federal Old Age Security pension.

D'Entremont's May 26 letter referred to the incident taking place at 10:55 a.m. on May 6, and a sign-in sheet for Chancery Place from that date shows her signing in at that time.

People's Alliance leader Kris Austin said d'Entremont should have revealed that the initiative was hers in her original letter.

"It's almost like she writes it in the third person and then signs her name at the bottom as if she's not the complainant," he said.

"So it's very misleading, very deceptive in its approach and I believe the people of the province deserve better in terms of accountability."

D'Entremont pointed out in a press release last week that the Official Languages Act gives the commissioner the power to launch an investigation "on his or her own initiative."

"The commissioner believes that it is important that independent officers of the Legislative Assembly be able to conduct investigations on their own initiative," the release said.

"This is necessary so that they may fully exercise their oversight role over government activities.

"For many reasons, citizens do not always file a complaint when their language rights are not respected by provincial institutions."

After CBC News asked her office why she didn't make her role clear in her May 26 letter, d'Entremont issued a statement saying the act "does not require us to specify" whether an investigation is based on a complaint or her own decision.

"Whether an investigation originates from a complaint filed by a member of the public or as a result of a situation the commissioner has become aware of or has experienced," the letter said, "the investigation process is the same."

Grant said d'Entremont decision to not disclose her role "did ruffle a few feathers" but said it wouldn't have changed much if she'd been more candid because she was "within her rights" either way.

D'Entremont's May letter only notified the government of her investigation and asked for information. It didn't make any recommendations.

Despite comments on social media she is the "judge and jury" in Grant's case, the languages commissioner does not have the power to issue orders or enforce the law. The provincial government made the decision to cut Grant's hours.

Arseneault wouldn't comment on that decision, or on why the province would change Grant's status before d'Entremont made recommendations.

"I'm not sure what happened," he said.

"It's unfortunate what's happened, but we'll wait to see what the true situation is once we get that report."

Earlier this year, the Gallant Liberals rejected a recommendation by d'Entremont that bilingualism be made a requirement for senior government bureaucrats.

In her written statement, d'Entremont didn't give a timeline for when she'll finish her report on commissionaires but said the investigation is continuing.

Austin says the People's Alliance supports providing service to New Brunswickers in their choice of English or French, but he doesn't believe d'Entremont should be able to launch her own investigations.

He also says Grant's readiness to call in a bilingual colleague was a reasonable solution so he shouldn't have had his hours reduced.