The Higgs government has delivered a second consecutive balanced budget, a fiscal plan with nods to both tax reductions and increased social spending and some carbon tax sleight of hand.

The Higgs government has delivered a second consecutive balanced budget, a fiscal plan with nods to both tax reductions and increased social spending and some carbon tax sleight of hand.

The budget also projects a surplus of $92.4 million in the 2020-21 fiscal year, leading to a $129.3 million reduction to New Brunswick's accumulated debt.

The small but significant increases in social assistance rates and reductions in property tax rates could help the budget win the support of other parties in the legislature, where the Progressive Conservative government does not have a majority.

"We've turned our situation around in order to allow us today to protect our most vulnerable, our communities, help our businesses grow, and allow us to better protect our province against unexpected events," Finance Minister Ernie Steeves said in his budget speech in the legislature Tuesday.

But he also said the balancing act was not politically motivated to help the PCs win a key vote on the budget next week. 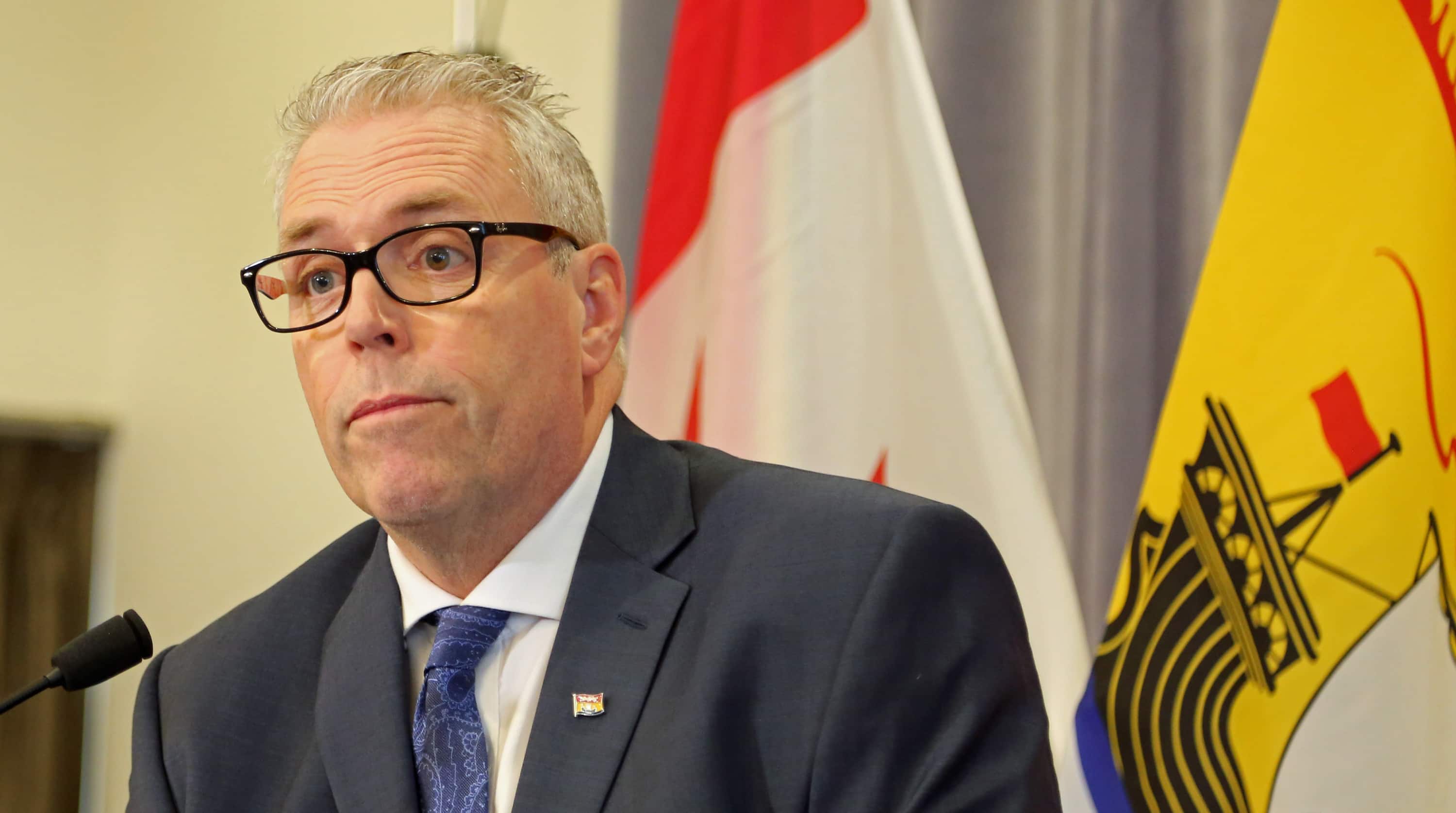 "This is to save New Brunswick, not to save our government," he told reporters.

The black ink is helped by a major increase in federal transfer payments for the coming year. Those payments are jumping by more than $200 million.

"Certainly the choices weren't as hard this year as they were last year," Steeves said, though he credited prudent management by the Tories more than the injection of cash from Ottawa.

The rosier financial picture will allow the province to spend more money, including an increase of five per cent in the three main social assistance programs affecting single recipients.

About 15,000 people in the three programs, or about two-thirds of all recipients, will see the increase May 1.

A year later, the rates in those three categories will be indexed to the consumer price index, meaning they'll rise automatically at the rate of inflation. Other rates will stay the same.

Green Party Leader David Coon had been calling for increases and his vote could be key to the budget passing or being defeated in a vote expected March 20. A rejection of the budget would trigger a provincial election.

Coon told reporters that he liked some of the measures in the budget but they don't go far enough.

He said he and his two fellow Green MLAs were not ready yet to decide how they'll vote.

"The balance of power has shifted in this legislature toward the Green caucus, so we take that responsibility very seriously," he said.

"So we're going to take our time to reflect on the budget, discuss it, and in the end come up with a decision that in our view is in the best interests of our province."

Health spending will also increase by 3.9 per cent, with some of that increase paying for 26 new nurse practitioner positions around the province.

The Progressive Conservatives also plan to begin gradually reducing some taxes in the coming year, a move the People's Alliance has been calling for.

Starting in April, the so-called "double taxation" of apartment properties will start to be reduced with a goal of cutting it in half over four years.

"We're very pleased to see it's a decrease," said People's Alliance Leader Kris Austin. "It's not as much as we'd like. We'd like to see the elimination a lot sooner but it is certainly a step in the right direction."

The PCs will also reduce the non-residential property tax rate, which applies to private businesses, by 8.25 per cent per year until 2024.

Austin said the tax measures have prompted all three Alliance MLAs to support the budget.

"It's going to be a hard budget to vote against," he said.

Liberal Leader Kevin Vickers said his party still plans to vote no in the hopes of defeating the government and triggering an election.

He said comments by Steeves about the need for health reform to continue shows the PC government plans to revive its cancelled plan to close small-hospital emergency departments.

"The budget is going to serve as the cornerstone for the government to continue its cuts to health care," Vickers said.

Saint John Harbour Liberal MLA Gerry Lowe has said in recent weeks he may vote for the budget, depending on what's in it.

Lowe left the legislature Tuesday without speaking to reporters.

Vickers said Lowe will face consequences if he breaks ranks with the party to vote for the budget, a move that could help keep the PCs in power.

The budget also lays out specific numbers for the Higgs government's carbon tax, which is set to replace the federal carbon price in New Brunswick on April 1 — but only if legislation passes in time.

The federal price for consumers was set to rise to 6.6 cents per litre on April 1. The new provincial tax will be the same amount, but the PCs will cut the New Brunswick gas tax by 4.6 cents, leading to a net two-cent carbon tax at the pumps. 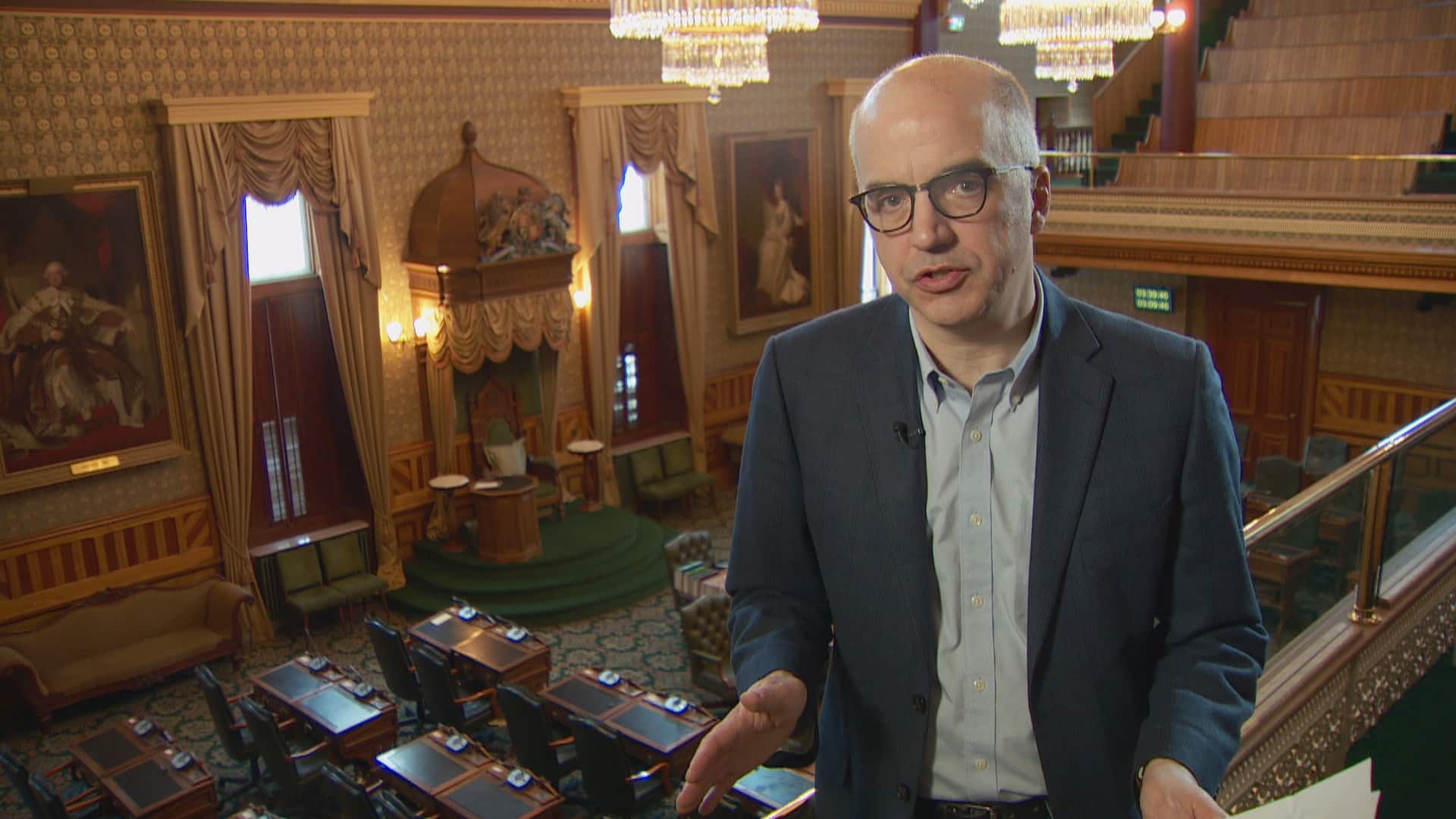 12 months ago
2:22
The CBC's Jacques Poitras breaks down the possible scenarios that might trigger an election after the provincial budget Tuesday. 2:22

The province will collect $129 million from the carbon tax. Of that, $36 million will go into a fund for climate change projects.

"There are exciting projects that I'm sure the Green Party and others throughout the province, throughout the government, will come up with," Steeves said.

Ottawa's climate plan requires the provincial carbon tax to apply to natural gas, but by giving $9 million — the same amount it will collect — to Liberty Utilities, the province is erasing the impact of the tax on the company.

The reduction in the debt, to $13.7 billion by the end of the fiscal year, translates into a $20 million reduction in what the province will have to spend on interest payments on the debt.