Premier-designate Brian Gallant met with outgoing Premier David Alward to discuss the transition to a Liberal New Brunswick government and is now weighing his options for cabinet posts. 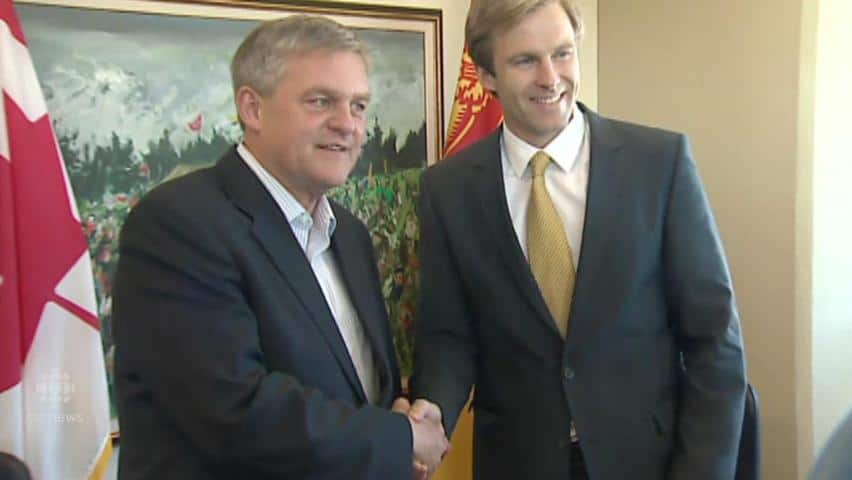 New Brunswick's new Liberal government is expected to be sworn in within two weeks.

The first step toward the transition took place on Wednesday, with a meeting between Premier-designate Brian Gallant and outgoing Premier David Alward in Fredericton.

Gallant says he's confident the process will go well, but a firm date has not yet been set.

Asked about forming his first cabinet, Gallant said he will be working toward one that has a balance of language, geography, and gender.

"We want to make sure that every perspective possible is represented in cabinet," he said.

But his choices may be somewhat limited.

Twenty-seven Liberal MLAs were elected across the province on Monday night.

The party fared poorly in English New Brunswick, however, with only about a dozen successful anglophone candidates, which means all of them will likely get serious cabinet consideration.

Prominent women, such as Norma Smith in Southwest Miramichi and Shannon Merrifield in King Centre, came up short.

In the Saint John area, the Liberals lost more than they won — and the wins were narrow.

In Fredericton, six of the seven Liberal candidates Gallant campaigned for went down, likely putting Stephen Horsman, of Fredericton North, on the cabinet shortlist.

Carleton-Victoria's Andrew Harvey, who was suspended from the Liberal caucus during the election campaign over fraud charges that were subsequently dropped, may also get careful thought as one of the party's only anglophone MLAs in northwestern New Brunswick.

Newcomers could be cabinet contenders

Newcomer John Ames, a teacher in St. Stephen who won the Charlotte-Campobello seat, is also a contender, being one of only four Liberals elected south of Fredericton and west of Moncton — all of them men.

Gallant commented that not enough women get elected, but said there will be women in cabinet.

He has four Liberal female MLAs to choose from.

Miramichi Deputy Mayor Lisa Harris, who is another newcomer after her victory in Miramichi Bay-Neguac, will likely get a hard look as the only Liberal anglophone woman elected outside of greater Moncton, where a total of seven Liberals were elected, including Gallant and four of his senior critics in opposition.

The other women include:

Serge Rousselle, in Tracadie-Sheila, is the only one who is a lawyer, other than Gallant, making him a likely choice for attorney general.

Donald Arseneault, in Campbellton-Dalhousie, is almost certain to grab a senior cabinet post in the Gallant government, being a former deputy premier and minister of multiple portfolios in the Shawn Graham government, and having served as the health critic for the Liberals in the last legislative assembly.

Similarly, Victor Boudreau, in Shediac-Beaubassin-Cap-Pelé, who served as the interim Liberal leader after Shawn Graham resigned in 2010, is a strong contender.

Denis Landry in Bathurst East-Nepisiguit-Saint-Isidore, was the opposition whip and critic for public safety and solicitor general.

Veteran Charlotte County Liberal Rick Doucet, in the riding of Fundy-The Isles-Saint John West, was the critic for energy and mines and Efficiency NB when the Liberals were in opposition.

Other Liberal MLAs who handled critic portfolios include:

The other Liberal MLAs elected Monday are: