The New Brunswick government says it will enter the legal-cannabis retail market by having NB Liquor set up a network of tightly controlled, stand-alone stores starting next July.

The New Brunswick government says it will enter the legal-cannabis retail market by having NB Liquor set up a network of tightly controlled, stand-alone stores starting next July.

Up to 20 stores will be established with strict policies in place: they will be located at least 300 metres away from schools, they will only display products under glass, and customers will need to show identification to prove they are of legal age before they can even get in.

There's no decision yet on what the price will be, what the stores will be called, or what the legal age will be.

"There is much work to be done in a very short period of time," NB Liquor chief executive officer Brian Harriman said at a Wednesday morning news conference.

"But we are confident we will be able to develop the proper system for the distribution and retailing of legalized recreational cannabis."

Finance Minister Cathy Rogers said jurisdictions that already have legalized marijuana sales, including the states of Colorado and Washington, recommended the province strictly control sales, at least at the outset.

"Their advice was to start with tight government oversight in the beginning," she said.

"We want to ensure that cannabis stays out of the hands of youth and criminals."

Harriman said the stores will be set up in 15 communities and will measure about 2,500 square feet or 232 square metres.

There will be no decorations or advertising, such as window displays, visible outside the stores, but Harriman said NB Liquor aims to offer "a pleasant shopping experience" inside, with trained staff offering one-on-one advice to customers.

Online sales will also be allowed, but the details haven't been worked out yet.

One option is "click and collect," which would see customers order online but go to a retail store to pick up their cannabis. Another is delivery by trained staff, who check identification at the door.

NB Liquor looks to break even

NB Liquor aims to break even with the stores in the beginning. The priority is not to make a profit but to keep marijuana away from children and undercut the illegal market, Harriman said.

New Brunswickers who are too young to buy cannabis legally will likely find it harder to buy illegally because the stores should drive most illegal dealers out of business, he said.

"With a regulated controlled market, the size of the illicit market is going to shrink," he said.

"It'll never be airtight but we think we can absolutely tighten it up."

Rogers said non-medicinal dispensaries are illegal and will remain illegal under the new system. She said public safety officials will be expected to enforce the law.

The province announced the creation of a Crown corporation earlier this year to oversee cannabis sales. That company will sign a service-provider agreement with a new subsidiary of NB Liquor.

The union representing the 500 NB Liquor employees applauded the decision because it will mean more unionized jobs.

Jamie Agnew, the president of Local 963 of the Canadian Union of Public Employees, even suggested that current illegal dealers could join the workforce.

"I think the new workers of Cannabis New Brunswick, or whatever it's going to be called, will enjoy our contract and will enjoy the benefits of getting out of the illegal trade and getting into the legal trade, and having a good-paying job with good benefits and all the things that come with being unionized," he said.

Agnew said he is a user of medicinal marijuana.

Progressive Conservative MLA Ross Wetmore said he wasn't surprised that the government will use NB Liquor.

The PC position is that a private-sector model should sell legalized cannabis because it would cost taxpayers less.

"We support private but let's see what they roll out," he said.

"I don't want to be very critical until I see what they are going to propose." 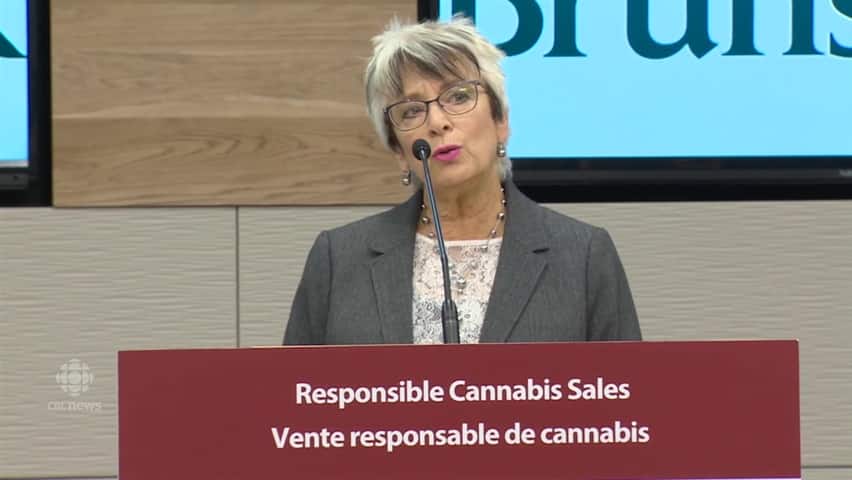 The province has signed agreements with two cannabis producers, Organigram and Canopy Growth, to be suppliers.

They will supply at least nine million grams a year for sale in the recreational use market.

An interim report in June recommended legalized marijuana be sold through a Crown corporation.

"As we move forward with the anticipated legalization of cannabis … we will continue to work with the public, communities, law enforcement and all other partners and stakeholders to implement public safety and health protections," said Rogers.

Where the pot shops will go across New Brunswick

With files from Elizabeth Fraser