According to fire captain Brandon Luke, Hoyt firefighters have rescued 12 people and dozens more pets and cattle since 6:30 a.m. on Saturday.

As heavy rain caused water levels to rise in Hoyt, N.B., on Saturday morning, firefighters rescued 12 people and dozens of pets and cattle, according to fire captain Brandon Luke.

The small New Brunswick community is about an hour's drive northwest of Saint John and was decimated by flooding like many parts of New Brunswick.

"Between the ice jams in the rivers and with all the snow and ice that we had already had … the water had nowheres to go," he said.

"We had so much water come down on such a short period of time."

Luke said firefighters were responding to calls about flooded basements for most of Saturday morning until they started receiving calls from people needing to be rescued shortly after 10:15 a.m.

At one point there was a "couple people that were sitting on their kitchen table waiting for us to get to them with water flowing underneath the table," he said.

According to Luke, firefighters responded to another rescue Sunday morning after a man drove past a barricade on a flooded road Saturday night causing his car to be swept off the road by the current — landing it in a pond.

The man stayed in the vehicle overnight, Luke said, and was found, rescued and sent to the hospital Sunday morning.

His condition is currently unknown.

Sometime after noon on Saturday, water began gushing through the deck of Hoyt's historic Bell Bridge.

Rising waters and raging waves had ripped out and smashed the boards along the 87-year-old covered bridge causing gaps for the water to flow through.

"It's very doubtful at this time that that bridge will ever see another car on it," Luke said.

The bridge's damages are a "devastating" blow to the people of Hoyt, he added, and that the bridge is "a piece of history that will certainly be lost forever."

"We've been recognized as a covered bridge community for years. It's a huge tourist attraction — even our fire department crest displays the covered bridge," he said.

Our covered bridges are not only significant historic places, they're also places that connect these communities as well and the people that live across those bridges.— Debbie McCann

"It's a huge loss to the community and the province itself."

Residents of the small community flocked to the scene to take photos and videos of the bridge.

Debbie McCann was one of the residents who witnessed the bridge's destruction.

She was stranded at the bridge on Saturday, she said, watching helplessly as icy water slashed through the historic crossing.

"The bottom of the bridge was just starting to go and it was just hanging there," she said.

"There was water running through one side to the other side and pieces of branches and trees and everything going through it. It was really sad to see that."

The Bell Bridge is one of three covered bridges in Hoyt and is a significant piece of the community, she said. The people cherish the 87-year-old bridge as a proud of part of their rural identity. 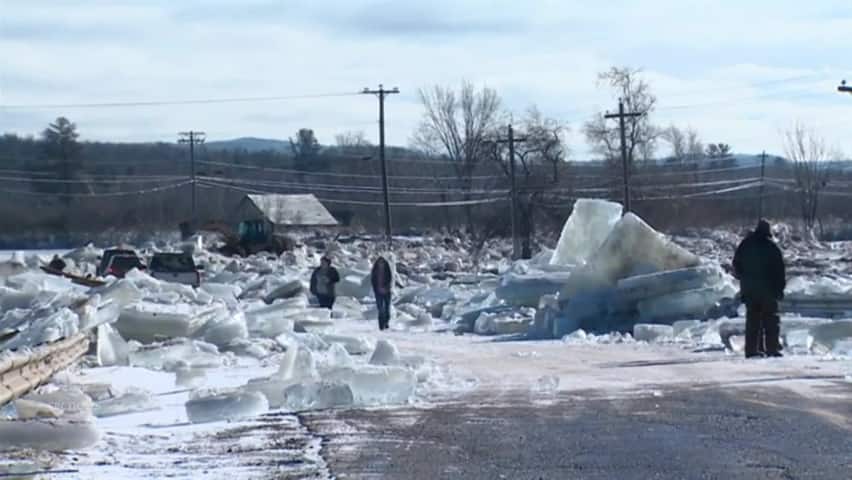 'It seems every time there's a flood we lose something else, but we don't seem to get much back'

3 years agoVideo
1:19
The small New Brunswick community was decimated by flooding like many parts of New Brunswick. 1:19

Every teenager and child in Hoyt has spent time carving their names on the bridge or swimming in the waters below, she said.

But more than that, she said, it was a structure that brought people in the area together.

"Our covered bridges are not only significant historic places, they're also places that connect these communities as well, and the people that live across those bridges. It's devastating to lose any bridge."

"It seems every time we have a flood, we lose something else, but we don't seem to get much back."

He said the Bell Bridge "survived the night" but anticipates "there's been extensive damage," though the government won't know the full extent of the damage until water levels recede.

With files from Blair Sanderson and Catherine Harrop