New Brunswick has an eighth case of COVID-19, a boy under the age of 10 in the central part of the province who is a presumptive case linked to a previous travel-related case, Dr. Jennifer Russell, the chief medical officer of health announced on Tuesday.

New Brunswick has an eighth case of COVID-19, a boy under the age of 10 in the central part of the province who is a presumptive case linked to a previous travel-related case, Dr. Jennifer Russell, the chief medical officer of health announced Tuesday.

There are now two confirmed cases and six presumptive cases.

Russell declined to tell reporters during the daily update whether the two cases reported Monday at UNB Fredericton in a memo by president Paul Mazerolle are among the eight cases, citing privacy. 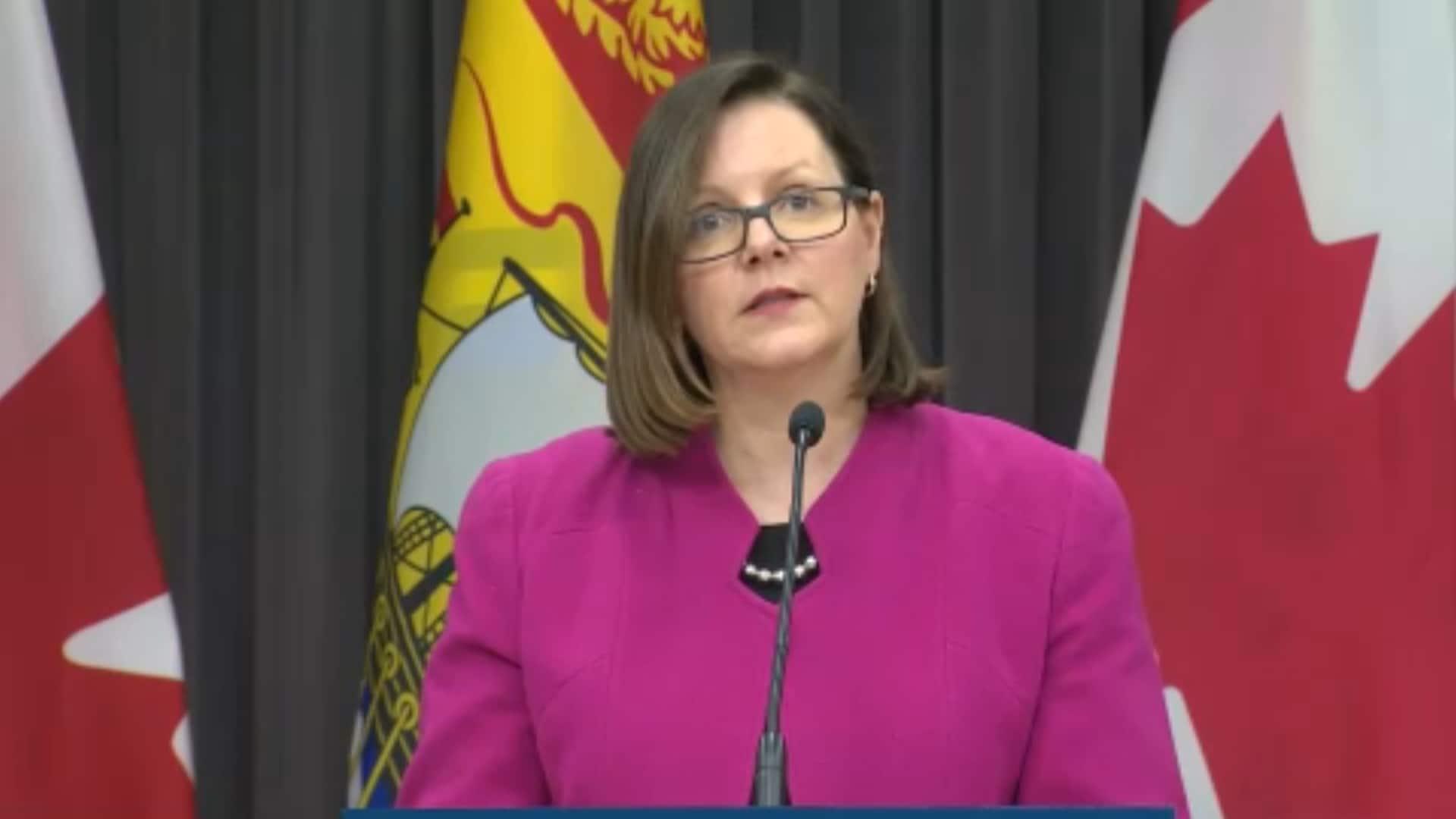 New presumptive COVID-19 case is male under 10 in central N.B.

12 months ago
1:31
Jennifer Russell, chief medical officer of health, has announced the 8th presumptive case of COVID-19 in the province. The case is a male under 10 and located in central New Brunswick. 1:31

Nor would she say anything more about the child case.

She will only talk in terms of presumptive and confirmed cases.

This underlines the importance of the actions everyone can take to mitigate the impact of the virus, she said, such as staying home or keeping a social distance of six feet (or about two metres) to help prevent the spread.

To that end, family doctors have been authorized to treat patients virtually over the phone or via secure video chat for routine services, such as prescription refills or followup treatment, said Russell. Psychiatrists have also been authorized to provide "virtual" mental health services.

P.E.I.'s chief public health officer Dr. Heather Morrison has asked people on that flight to quarantine as soon as possible.

They should also call 811 if they have symptoms.

They will be moved into a nursing home that provides services in the language of their choice within 100 kilometres of their permanent address, he said.

Premier Blaine Higgs reassured residents that grocery stores and pharmacies have access to supplies and will stay open.

"Stores are not running out of food or essential supplies and that empty shelves are being restocked quickly." 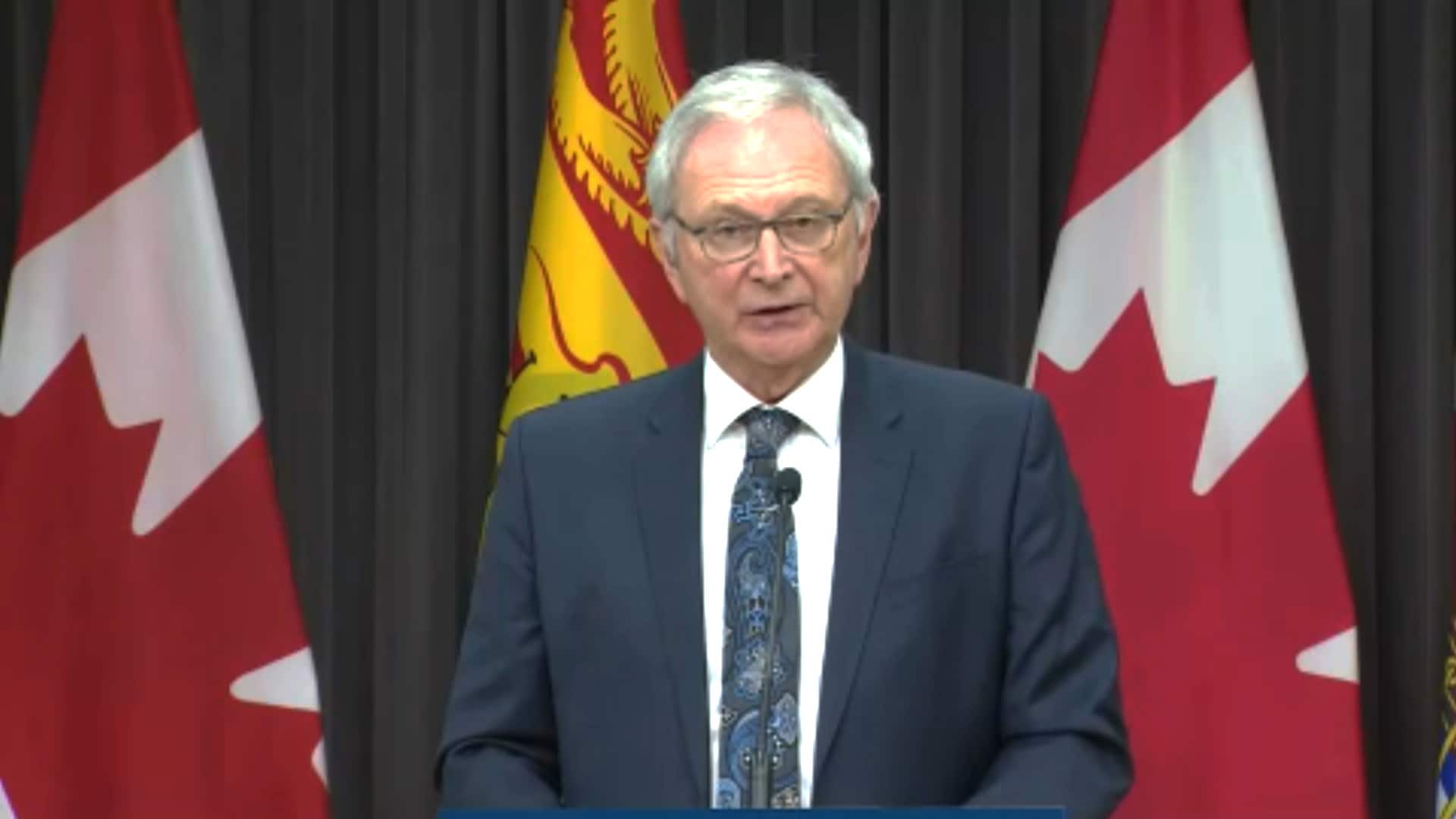 12 months ago
1:19
Premier Blaine Higgs said the Department of Social Development is working on an urgent plan that will move 65 individuals from hospital beds into nursing homes to free up beds for COVID-19 patients. 1:19

In many cases, grocery stores are also setting aside certain times for seniors and people living with disabilities to shop.

He said NB Power also needs to be flexible in the billing and payment process, for people having trouble paying their bills on time.

"It's a time for understanding and flexibility."

Higgs called on banks to help small businesses and employees who have lost work because of closures recommended during the COVID-19 outbreak.

Supply teachers scheduled to work for the next two weeks, as public schools are closed, will be compensated.

And if your daycare is closed, Higgs said parents will be able to rely either on the provincial or federal government for financial support. He uses the example of parents paying for daycare even though their child isn't there.

There is a lot of anxiety among truck drivers as travel restrictions increase.

"Until we get clarification that drivers are exempted and don't have to self-quarantine when they come back from the U.S., some drivers have indicated they're not sure they want to do routes to the U.S. until this is cleared up," said Jean-Marc Picard, the executive director of the Atlantic Provinces Trucking Association

This is impacting operations at some trucking companies, but they are continuing to work with federal and provincial governments to ensure truckers can continue their work.

Picard said better communication is needed from government officials indicating the industry will be OK.

"We need the flow of goods to keep going such as food and medical supplies. A lot comes through the U.S.," he said.

"We need the borders to understand we are an essential service."

Many businesses and government agencies are taking steps to limit contact with customers and the handling of money.

RCMP detachments across the province are limiting their front counter service for the foreseeable future.

Higgs said between 60 and 70 per cent of New Brunswick civil servants are working from home.

What are cities doing?

In Fredericton, emergency dispatchers are asking additional questions regarding travel and warning signs of potential COVID-19, before dispatching officers to non-priority calls.

"All officers are being issued appropriate protective equipment," said Alycia Bartlett, a spokesperson for the Fredericton Police Force.

Fredericton City Hall and other municipal facilities will also be closed until further notice.

Meanwhile, Fredericton Region Solid Waste said FERO Waste & Recycling is making changes to its rural recycling collection and will only be doing garbage collection over the next few weeks.

In Saint John, the city is preparing to transition to an essential services only model. Saint John City Hall and other municipal facilities will close, along with their counter services for the public.

The City of Moncton will also transition from normal operations to maintaining essential programs and services only.

Two presumptive cases of COVID-19 have been reported at UNB Fredericton.

As a result, the University of New Brunswick shut down its residences Tuesday.

About 1,100 students live on the UNB Fredericton campus and about 200 live in residence at UNB Saint John.

Those who cannot leave, like international students who are stuck in Canada because of travel bans, will be allowed to stay.

Depending on how the outbreak progresses, meals may need to be delivered to rooms, said George MacLean, UNB's vice-president academic.

"Discovering that there were two presumptive cases on the campus meant that a lot of the recommendations or guidelines that we were putting in place have now become directives."

MacLean was unable to speak to the specifics of the cases but said the university is working with the Department of Health to identify any students who may have come into contact with the individuals.

Both UNB and St. Thomas University have switched to an essential services model. That means only faculty and staff essential to delivering bare-bone services will remain working on the campuses.

CUPE says it has made a deal with the New Brunswick government to suspend contract provisions during the COVID-19 pandemic.

The union said this will allow employees to redeploy to areas of maximum need when they need to respond to requests related to COVID-19.

On Monday, Premier Blaine Higgs announced all non-essential government services will be shut down Tuesday, until further notice.

Employees will remain on standby and available to be deployed to help in critical service areas, either because critical staff are sick or because additional staff are needed, he said.

According to a press release on behalf of all the top judges in New Brunswick, courthouses across the province have restricted access to those who need to be there for court proceedings. That includes counsel, litigants, accused, witnesses, victim service workers and media.

New Brunswick Court of Appeal is cancelling all hearings until March 18. Future hearings will be held by telephone conference.

Court of Queen's Bench has cancelled all jury trials. Any matters in small claims court have also been adjourned.

The offices of the clerk of the Court of Queen's Bench will remain open at a reduced capacity.

Matters in family court including protective hearings, child protection are considered essential and will be heard.

Criminal matters in the Court of Queens Bench and provincial court where the accused is in custody will be held.

Provincial court trials and preliminary inquiries will be adjourned but people who are self -represented must appear in court on the trial date or a warrant will be issued.

Other provincial court matters such as plea court, judicial interim release hearings, judgments, and more will proceed as scheduled except but  judges are being asked to use video and audio technology where possible.

Elsipogtog Court is cancelled until March 30.

Public Health has confirmed 196 negative tests across the province.

With files from Gail Harding