A Moncton judge has declared a mistrial in the first-degree murder trial of Fred Prosser over comments one of the jurors posted on a Facebook site.

Juror No. 12 was a member of an anti-Fred Prosser group 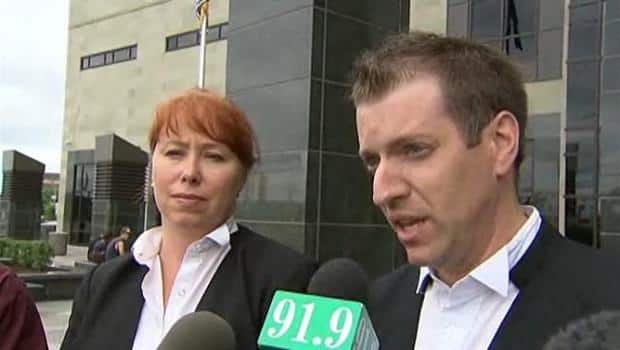 9 years agoVideo
2:22
A Moncton judge has declared a mistrial in the first-degree murder trial of Fred Prosser over comments one of the jurors posted on a Facebook site 2:22

A Moncton judge has declared a mistrial in the first-degree murder trial of Fred Prosser over comments one of the jurors posted on a Facebook site.

The judge declared the mistrial on Wednesday morning, just as the Crown was preparing to start its opening statement.

Prosser, 33, of Shenstone, is charged in connection with the 2010 death of his ex-girlfriend and mother of his two children, Sabrina Patterson, 25, or Riverview.

Patterson's family had visited some Facebook pages on Tuesday, after the 12-person jury was selected, and cross-referenced the names of the jurors.

The family discovered that juror No. 12, Tara Thorne, was a member of an anti-Prosser group and had posted comments on the site.

The family was concerned Thorne's past could have led to a mistrial or an appeal in the future, he said.

"My biggest concern was the fact being that it only takes one juror for not guilty, so like I said, we want to make sure. We didn't want to go through this again," Patterson told reporters outside the courtroom.

"Maybe [Thorne] didn't think it would make a difference and stuff," he said. "And maybe she never thought. Like I said, it's been a while. The comments were actually made back in, I would say a year ago, so I mean maybe it's something she forgot, you know. I don't know.

"We wanted to make sure she wasn't there."

Judge George Rideout said he had no choice but to declare a mistrial because there was a risk that Thorne may have tainted the rest of the jury.

The new jury will be selected on Nov. 20. Prosser will remain in custody.

"My understanding is they're asked if they have any comments, or have made any comments in the past, and if they have, that should have been brought forward in the beginning and that would have prevented this in the first place and we wouldn't have had to call a mistrial," she said.

Crown prosecutors involved in the case say this is the first time they've dealt with such a situation. But prosecutor Annie St. Jacques said she agrees with Rideout's decision to declare a mistrial.

"The impartiality of a juror is so important in our justice system, we cannot take any chance and have a bad verdict because somebody would contaminate others," she said.

The judge had explained the requirements of jury duty to each prospective juror early on, said St. Jacques.

"He explained that if you read newspaper, radio, television, any media, he advised them that they need to put that aside if they're able and they need to be very neutral to be [chosen]. So, they have an opportunity to withdraw themselves if they feel not neutral or not able to be impartial," she said.

"Considering the situation we were in, that was the only appropriate remedy to keep integrity of the justice system," Savoie said.

"So this is basically the situation that we're in: that Justice Rideout had no other choice but to order a mistrial. But the good news is that we have a very early trial date in November, considering the length of the trial, so we were able to open up our schedule very quickly."

Savoie said he hopes the next jury selection process will avoid the problem.

"This is something that we will certainly have to address to make sure that this kind of problem did not occur again," he said. "As for how Justice Rideout will want to proceed the next time around, we're not sure at this point."

"We want it done right. We don't want to go through this all over again. Once is enough, so we want to make sure it's done right," said Dale Patterson.

"We want to put this behind us, you know mostly for mum and dad," he said. "We wanted to make sure to get it over with. It's always in the news, I mean which is a good thing, it's in the paper, we get reminded a lot. And like I say we want to go mourn our own way."

The trial had started on Tuesday when the seven-man, five-woman jury was selected from a jury pool of 300 people.

The selection took place in a makeshift courtroom at the Moncton Coliseum.

Five weeks had been set aside.

Prosser was charged with Patterson's murder in January 2011.

Patterson and Prosser had an on-again, off-again relationship over seven years.

RCMP had initially reported that Prosser was also missing.

But he was found a few days later at his parents' home in Shenstone when officers went to the house to update Prosser's family members on the progress of the search for Patterson.