It's been nearly 70 years since the Chipman Grill and Taxi sign went missing from the small village 70 kilometres east of Fredericton.

It's been nearly 70 years since the Chipman Grill and Taxi sign went missing from the small village 70 kilometres east of Fredericton.

But in mid-November, two local treasure hunters found the weathered sign covered by snow in the woods outside the city.

"I came upon the sign and we were just sort of looking around, and there was snow on top of it at the time," said Rob Allaby, who was hiking with his brother when they found it.

"We just thought we'd lift it up … and it was a beautiful old double-sided neon sign that said Chipman Grill and Taxi on it."

Allaby has made a pastime of searching for lost treasure. This summer, he found a 1965 Southampton High School grad ring in Killarney Lake and tracked down the family of the late owner. He returned it to the graduate's mother in July, 50 years after it was lost.

He resolved to do it all again — but this time it was not only personal, it was a piece of village history.

"When you find a sign or something that belongs to somebody else and then you can return it to them after they thought it was lost for forever, and [it's] something that sort of takes them back to a loved one, it's a great feeling," he said.

After a series of Facebook messages, phone calls and online searches, Allaby discovered the Chipman Grill belonged to Holden Sears in the 1950s. 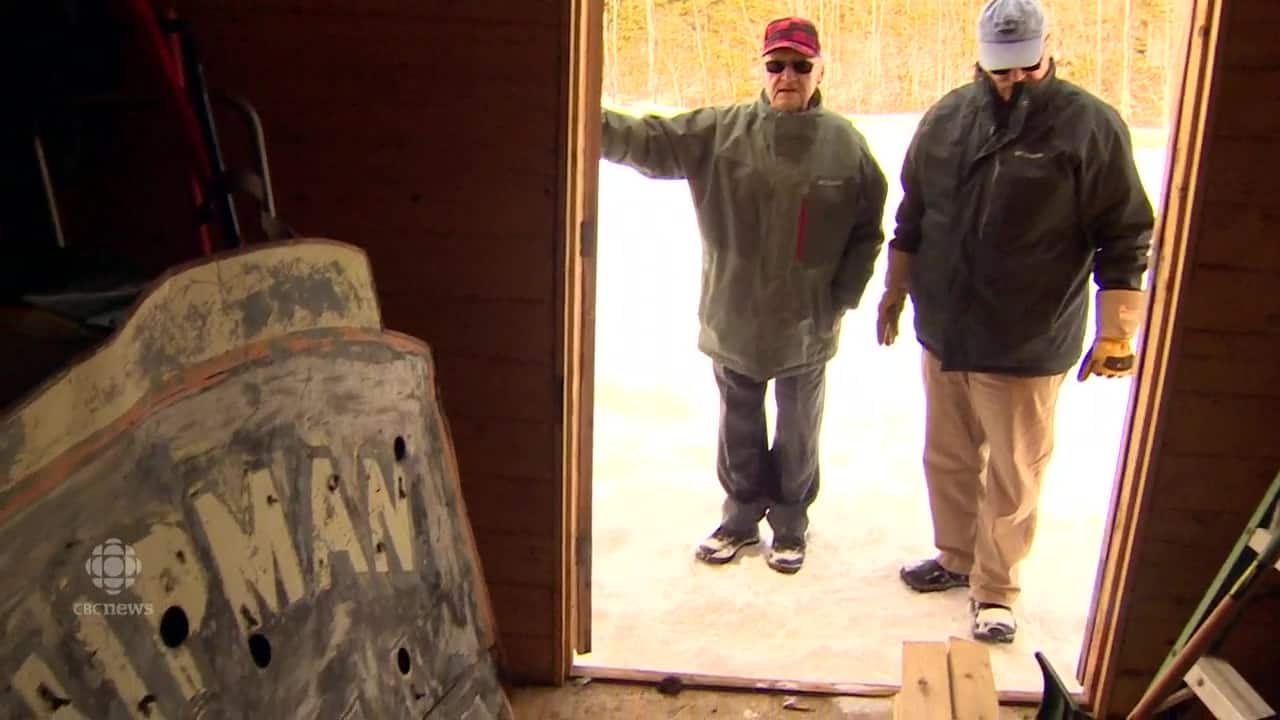 1 year ago
1:00
Two local treasure hunters found the weathered Chipman Grill and Taxi sign in the woods outside the city. 1:00

"I was blindsided when they called me on the telephone," said Mike Sears, Holden's grandson. Mike lives in Durham Bridge with his father, Leslie.

Mike said he remembered that his grandfather had a restaurant in Chipman, but he called his father to be sure.

Leslie remembers putting the sign up in 1949 with his father. Chipman did have a taxi service in those days, although the village of 1,200 doesn't have one now.

"It was, if I'm not mistaken, one of the first neon signs in Chipman, for that size anyway," Leslie said, who's now 87.

"That was brought to my attention in later years," he said.

"It was either stolen or what, I don't know. I don't know whether it was removed from the restaurant before it burned, or anything about that because we had already sold it."

It was great to see it because it brought back a lot of memories when we just youngsters down there.- Leslie Sears, son of restaurant owner

The grill was sold out of the family around 1956, and it eventually burned down.

"I thought it's probably gone, junk or whatever. Back then, I suppose a lot of that stuff went for salvage, figured if you could get a few dollars out of it, they'd sell it."

Leslie's son Mike has no memories of the sign but he was shocked to see it.

"I was surprised it was so big," Mike said, adding that the sign stands over a metre tall and is at least a metre and a half long.

"The holes in it I thought were bullet holes, but then I was told later that there were neon lights in it so I said, 'That's something for a small place like that and the age of the sign.'"

Mike said they offered the sign to the Chipman Heritage Centre but they didn't want it.

Instead, the sign is going to be raised at Leslie's brother's home on Grand Lake, where the family will get to see it at the reunion next summer.

"It was great to see it because it brought back a lot of memories when we just youngsters down there," Leslie said.