Cleaning up old grave markers, plaques and memorials is a strange job — but in Canada's oldest incorporated city, the demand is there, says Dave Barnes.

Dave Barnes has an unusual side hustle: cleaning and restoring gravestones, plaques and statues

In Saint John — Canada's oldest incorporated city — time-tarnished stones and statues are some of the city's key selling features.

But while the shabby-chic look is cool, the effects of time on monuments isn't so great.

That's where Dave Barnes comes in.

"Traditionally, Saint John has been an industrial centre, so there are a lot of environmental pollutants, plus lichen and moss and algae," said Barnes.

Barnes is something of an expert on how badly monuments can deteriorate.

Peeling away the grime and letting history shine though is "a rewarding job," he said.

By restoring pieces of Saint John's past, he said, he hopes to see an appreciation for history passed on to the next generation.

Contemplating the old stones in a cemetery first gave Barnes the idea for his business.

His wife was visiting her father, who died when she was an infant. Disheartened to see how dirty and faded his stone had become, she "noticed a lot of stones that were in disrepair and in need of cleaning," Barnes said.

Barnes soon got to work, scrubbing down the headstone and applying a gentle cleanser. After seeing how it was transformed, he realized the service was "something that other people would appreciate," he said. 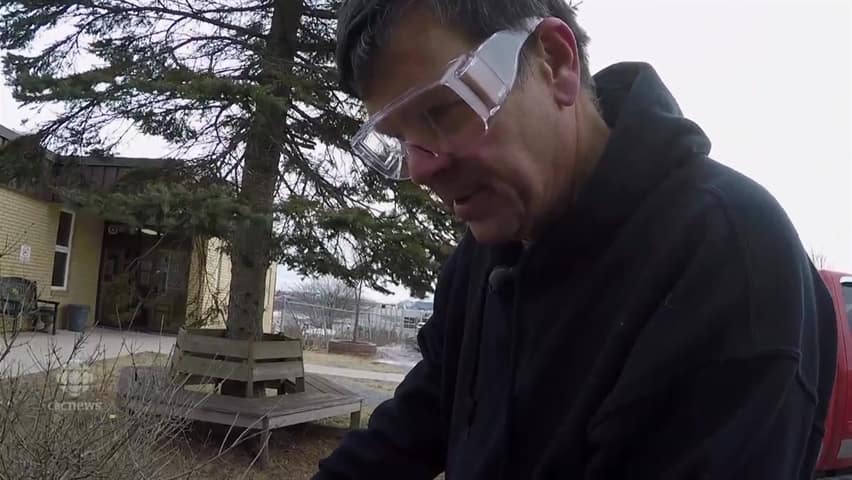 'We bring new life back into old monuments'

3 years agoVideo
0:33
Dave Barnes has an unusual side hustle: cleaning and restoring gravestones, plaques and statues. 0:33

He started advertising his services under the name Forget Me Not Restorations. Quickly, "there seemed to be a fair amount of interest. It quickly took off on the commercial side with civic monuments, cenotaphs and the like," he said.

In October 2017, Barnes was hired to restore the 1910 bronze statue of father of Confederation Samuel Leonard Tilley in King Square. He undertook the job with the support of Marc Doucet, the City of Saint John's operations manager for parks and public spaces.

"I don't think it had been cleaned since 1910," Barnes said. One of the essential things, he explained, was preserving some of the distinctive green patina on the statue, "so that people knew it was an older statue that had been looked after."

He washed the statue down. Then, he went to work on the metal surface with a propane torch on a low setting, getting it hot enough to melt a layer of hard wax applied with a paintbrush.

"The hard wax melts into all the pores and crevices of the statue and whatnot," Barnes said. "After that, we wait for the wax to harden and give it a buff to bring it back to a shine."

The result is a statue that retains the natural, oxidized look of distinguished old age but doesn't have major splotches of discoloration.

The age and materials of each monument require a different approach.

When Barnes was asked to fix up the 1901 plaque on the CIBC Building at 44 King St., he started by lightly sanding the border and raised lettering to bring it back to a brassy lustre.

He then spray painted the entire surface, "let that dry, and then covered that with a couple of coats of clear lacquer to prevent further tarnishing."

They "hadn't been cleaned in 70 years," Barnes said.

"They were in pretty rough shape: lichen, algae, they were blackened. Biological and environmental material, just everything. They look much better now."

He's also helped restore the Sackville cenotaph, the racing skull marker on Rothesay Road that pays tribute to the Great Race of 1871, the Charles Gorman and firefighter memorials in King Square, and numerous other plaques and stones around the province.

He undertakes a lot of the work with the help of his stepson Carter Wilson, 13.

"It's certainly been an eye-opener and a little educational," Barnes said. "And he's getting a little bit of an education, too."

Working together on the Sackville cenotaph, he said, means that Carter "gets a better understanding of the sacrifice that these men and women have made. They're not just names on a rock."

Someday, Barnes said, he hopes they can work on a restoration of the Loyalist Burial Grounds, a historic site he called "a jewel."

"I don't think people realize what we have here," he said. "You can go anywhere in the world and see new stuff.

"When you come to an older city, you're looking to see heritage."