Moncton city council has voted to build a 7,500-seat entertainment centre on the former Highfield Square property in the city's downtown. 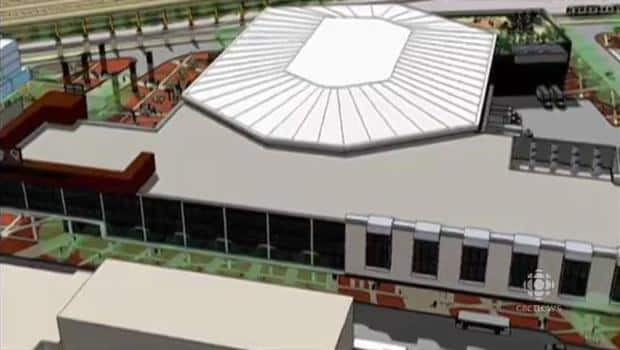 ​Moncton city council has voted to build a 7,500-seat entertainment centre on the former Highfield Square property in the city's downtown.

Mayor George LeBlanc was the only member of council to vote against the idea on Tuesday. He wanted a minimum of 9,000 seats in the new venue.

​LeBlanc points out the new facility will have only 800 more seats than the building it replaces — the Moncton Coliseum.

However, the city's consultant David Chemla from Deloitte says that's too many seats for a city the size of Moncton.

Chemla says both companies competing to build and manage the building for 30 years need to make a profit.

"My understanding is that the two proponents and others have said 7,500 is the sweet spot for the size of the Moncton market," he said.

​City manager Jacques Dubé says event promoters advised him that 9,000 seats would be too many for a city the size of Moncton.

"SMG, Global Spectrum, Live Nation, Eventco, Donald K. Donald were all in agreement on that point when we consulted with them and they are the experts in the business, not the city," said Dubé.

Dubé says it would be difficult for the city to build a bigger arena without raising taxes.

"The worst thing you can actually have is a building where half the seats are empty."

Coun. Dawn Arnold is worried that putting too much money into seats would mean abandoning the environmental and architectural parts of the project.

"I believe that more than seat counts, we need to build a state-of-the-art centre," she said.

"When I look at the Sydney Opera House, it only has 6,000 seats or so, but it's a world class building," she said.

​EllisDon and Bird Construction Inc. are the developers bidding for the entertainment centre. They have until mid-August to prepare their bids.

The expected cost of the complex is around $100 million.

On Monday, Moncton council agreed to pay $12.5 million to purchase the Highfield Square property as a site for the development.

Dubé hopes council will issue the contract to construct the new event centre by the end of the year.

That contract will finalize the design and the price of the project.​

"We will have what we call an open period, where the city will be having commercially confidential meetings with both corsortia to discuss their design, to discuss their business case and to mould the project going forward."

Time running out to secure financing

Dubé says he and Mayor George LeBlanc have met with Premier David Alward on several occasions and the premier has always said he supports a downtown event centre.

But Dubé says the City of Moncton needs a written commitment from the provincial and federal governments before the middle of August.

"The next few months there's going to be some fairly intense dialogue," Dubé said. "The mayor is speaking with the minister and the premier and they know the timeline."

He points to the $42-million Turtle Creek project in Moncton and the $90-million Saint John harbour clean up, which both received millions in funding from the two levels of government.

"It's not an unreasonable amount of money when you look at projects that they've funded elsewhere in the province on a large scale," he said.