The Diocese of Moncton is shedding staff and selling off one church property in order to cover the roughly $5 million in compensation owed to victims of sexual abuse. 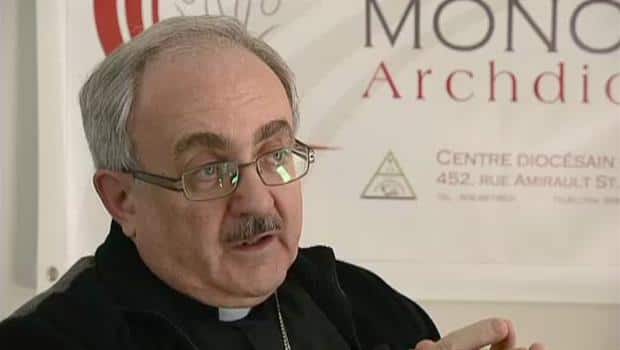 8 years agoVideo
2:16
The Diocese of Moncton is cutting staff and selling off property to afford to pay nearly $5 million compensation to victims of sexual abuse 2:16

The Diocese of Moncton is shedding staff and selling off one church property in order to cover the roughly $5 million in compensation owed to victims of sexual abuse.

The diocese has been forced to deal with a series of sexual abuse controversies in the last year.

Retired Supreme Court of Canada Justice Michel Bastarache was hired to help deal with the sex abuse compensation process. It is estimated the diocese will pay out $5 million to victims of sexual abuse.

Those bills have caused the diocese to cut the number of staff to 14 from 19. As well, the diocese’s office in Dieppe, which was once the home of the bishop, is being sold because it can no longer afford to pay the annual $50,000 in operating costs.

Archbishop Valéry Vienneau said the diocese's growing deficit and dropping church attendance factored into the decision to cut staff and sell off the property.

"I am concerned but I am also convinced that we will get through this," he said.

"I have hope that we'll get through this. This is a difficult time, but I mean when we sell a property like this, this is a fair amount of money coming in."

The leader of the Catholic church in southeastern New Brunswick said the growing compensation bills forced the diocese to put the properties up for sale earlier than it had anticipated.

Once the building is sold, the remaining staff will be split between St. Augustine's Parish and the Christ of King Parish in Moncton.

There could be more tough decisions ahead for the church in the region.

So far 80 people have been offered compensation for sexual abuse. The diocese also faces civil lawsuits and could be forced to pay out more.

The archbishop said he has to wait until the summer to figure out if the diocese will have to make further adjustments.

Vienneau said he believes the Dieppe office will be the only church property sold in the near future.

"We are not in any way thinking of selling churches or church properties at all. Should we come to that, I don't see why, but of course I can't predict the future," he said.

The church’s decision to sell off properties has received mixed reaction in Moncton.

Linda Campbell said the Moncton diocese shouldn’t be solely responsible for picking up the financial tab for the sex abuse compensation.

She said the decision to sell off the Dieppe property and the prospect of losing more buildings in the future may divide churchgoers.

"You're going to have less members sitting in the church because they've worked really hard to have what they have. And they're all going to lose it. And it's not their fault," she said.

But Bill Vance said the church must deal with its problems and change to meet its needs.

"With all the scandals with an old outdated financial model for the business of religion, there has to be changes. The church has to alter to figure out how to get more people through the door," he said.

Bastarache’s investigation into sexual abuse has been extended several times as more people have come forward with new allegations.

The compensation process began last spring when several people in the southeastern village of Cap-Pelé came forward alleging abuse against Father Camille Léger, who has been dead for 23 years.

Those abuse claims forced the church to address other allegations of sexual abuse by hiring Bastarache to lead the independent investigation.

The reconciliation and compensation process was expanded after accusations were made against two other priests, Father Yvon Arsenault and Father Irois Despres.

Bastarache informed the diocese of "serious allegations of sexual abuse" by the two priests.