The City of Moncton is the new owner of the Castle Manor lawn that one assessment valued at $1.1 million.

City will be responsible for mowing lawn that's been assessed as high as $1.1M 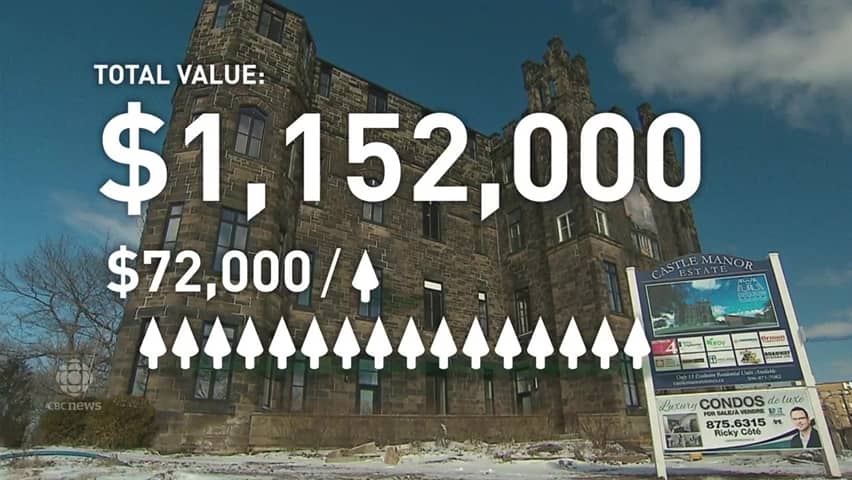 Here's why Moncton swapped the equivalent of $72,000 a tree for a lawn

4 years agoVideo
1:30
The City of Moncton is the new owner of the Castle Manor lawn that one assessment valued at $1.1 million. 1:30

The City of Moncton is the new owner of the Castle Manor lawn that one assessment valued at $1.1 million.

It traded a large section of the Robinson court parking lot plus $222,990 to buy the lawn that buffers Mountain Road and Castle Manor's still-in-development high-end condos.

Kevin Silliker, director of economic development with the city, said it's a deal that's been in the works for a while.

"Quite a few developers came in and looked at the property but ultimately were always turned away and scared away and intimidated by the challenges of developing and redeveloping that building."

He said one of the major challenges is "it truly is landlocked."

"The castle itself and the castle lawn were owned by different groups."

The lawn was owned by Galco Atlantic Investments, run by Stephen Gallant. Silliker said one problem was that the lawn is zoned residential, so Galco was free to build an apartment building in front of the manor.

"That would impact the public's ability to not only view a heritage property, a significant landmark for Moncton, but could also risk the trees that were in front of the castle, and certainly that's been a controversial issue in the past."

In 2011, about 50 protesters camped out on the lawn, some putting themselves between work crews and chainsaws to save the property's decades-old trees from being cut down.

But under the city's watchful eye, Silliker said, the trees are safe, as is a clear site line to the manor undergoing a $6 million renovation by developer Jay Tse.

Tse said he knew the city was in talks with Galco about buying the lawn, and it was an added incentive toward the purchase of the manor.

"That's one of the reasons why," said Tse.

But protecting the green space and the view comes at a cost. The city gave up a large section of a downtown parking lot plus cash to Galco Atlantic for the lawn.

"Once the values were determined it was a simple mathematical equation," Silliker said. "In this case there was about a $220,000 swing."

But what that parcel is worth varies greatly depending on whom you ask.

The province had the Castle Manor lawn assessed at $258,900. But the city hired an independent assessor, who determined the value of the property to be nearly four times that amount, $1,152,000, or $900,000 more than the province's valuation.

Silliker said he doesn't consider the inconsistency to be unusual.

"We work in land matters all the time, and we have noticed in the past some big swings between appraised value versus market value."

Judy Cole with Service NB explained the different tasks: "SNB is responsible for the real and true [market] value of all real property as of Jan. 1 of each calendar year.

"A private appraisal is a valuation on an individual property at a specific point in time with varying interests taken into consideration."

Galco Atlantic Investments now owns the parking lot, but it comes with conditions. If the company does not develop a commercial building worth $7.5 million in the next five years the city has the right to buy the land back at fair market value.

And Silliker said the city has no plans to do anything to the Castle Manor lawn, other than mow it.

"Ultimately, council went ahead, so it was it was felt that, yes, we did achieve good value."