Officials reported 17 new cases of COVID-19 in New Brunswick on Wednesday, amid efforts to contain an outbreak at a special care home in Moncton.

Officials reported 17 new cases of COVID-19 in New Brunswick on Wednesday, the province's largest single-day increase since late March, triggering efforts to contain an outbreak centred at a special care home in Moncton.

Dr. Jennifer Russell, the province's chief medical officer of health, said all of the new cases are in the Moncton health zone and connected to the Manoir Notre-Dame special care home, where an outbreak was declared Tuesday.

Russell said 13 residents, four staff and two family members have tested positive for the coronavirus. The first two cases were announced Tuesday. Two residents are in hospital in what she described as stable condition.

Russell said the source of the outbreak remains under investigation.

"This is definitely a wake-up call," Premier Blaine Higgs said at a COVID-19 briefing Wednesday.

Russell said Tuesday that a rapid-response team was sent to the home on Monday night to begin mass testing and contact tracing. A total of 81,696 tests have been done across the province since March, with 887 over the last 24 hours. 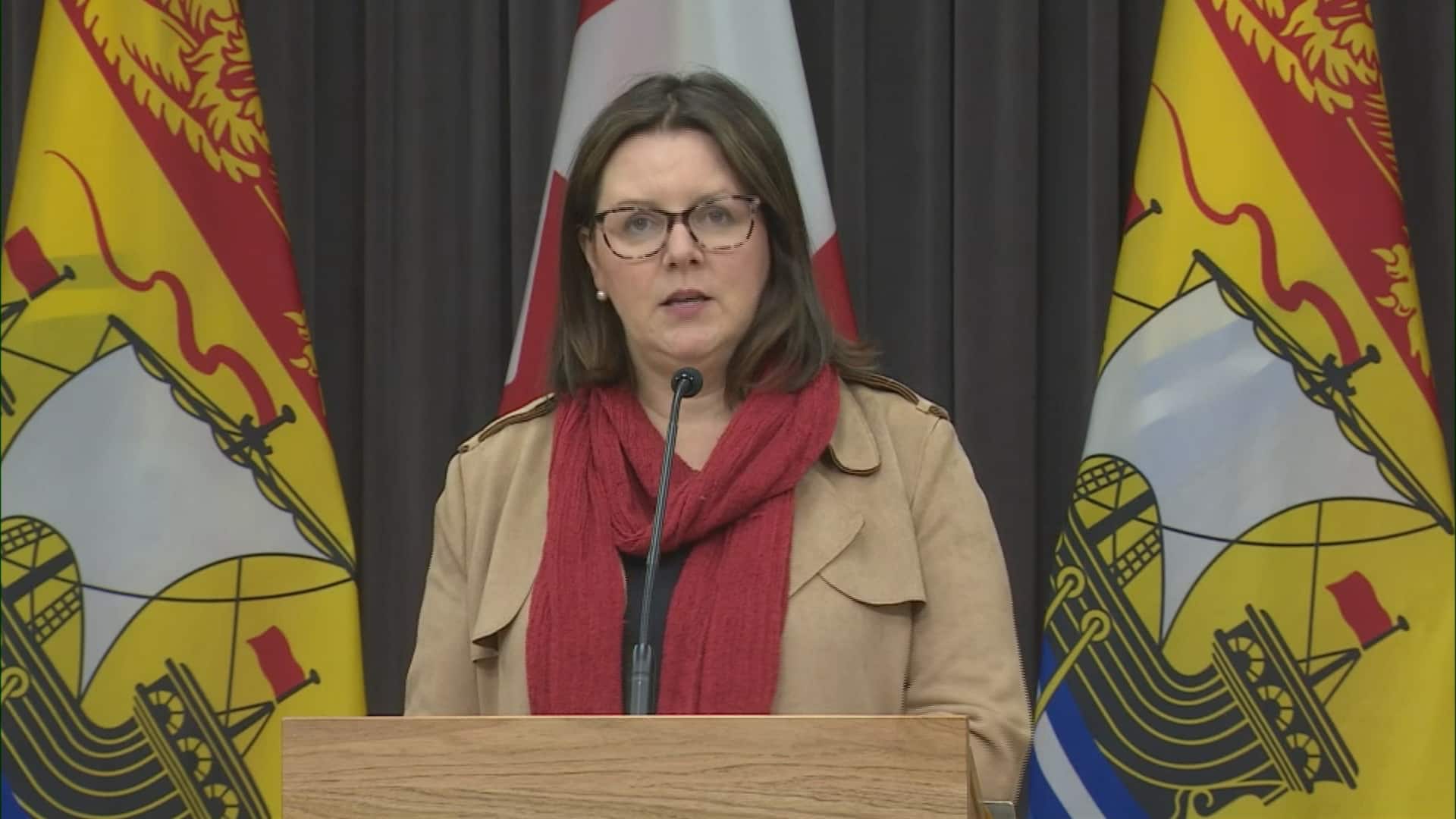 Russell said it will likely be two weeks before they have a better sense of the scale of the outbreak.

There are 22 active cases of the respiratory illness across the province. The 17 new cases range in age from their 20s to 90s.

Russell warned of two other potential sources of exposure to COVID-19 related to the outbreak: the optical centre at Costco in Moncton and the Moncton St-Hubert restaurant where an employee has tested positive.

Public health officials have asked anyone who has visited those locations between specific dates and times to self-monitor for symptoms and, if they have those symptoms, to call 811.

St.-Hubert spokesperson Josée Vaillancourt said the employee who tested positive on Tuesday evening is not showing symptoms and is doing well.

Vaillancourt said two other employees at the location have been asked to stay home and get tested. She said workers wear masks and take other precautions to protect customers.

Russell said the province is considering whether to move the Moncton region back into the "orange" phase which could result in more restrictions on the public and businesses. 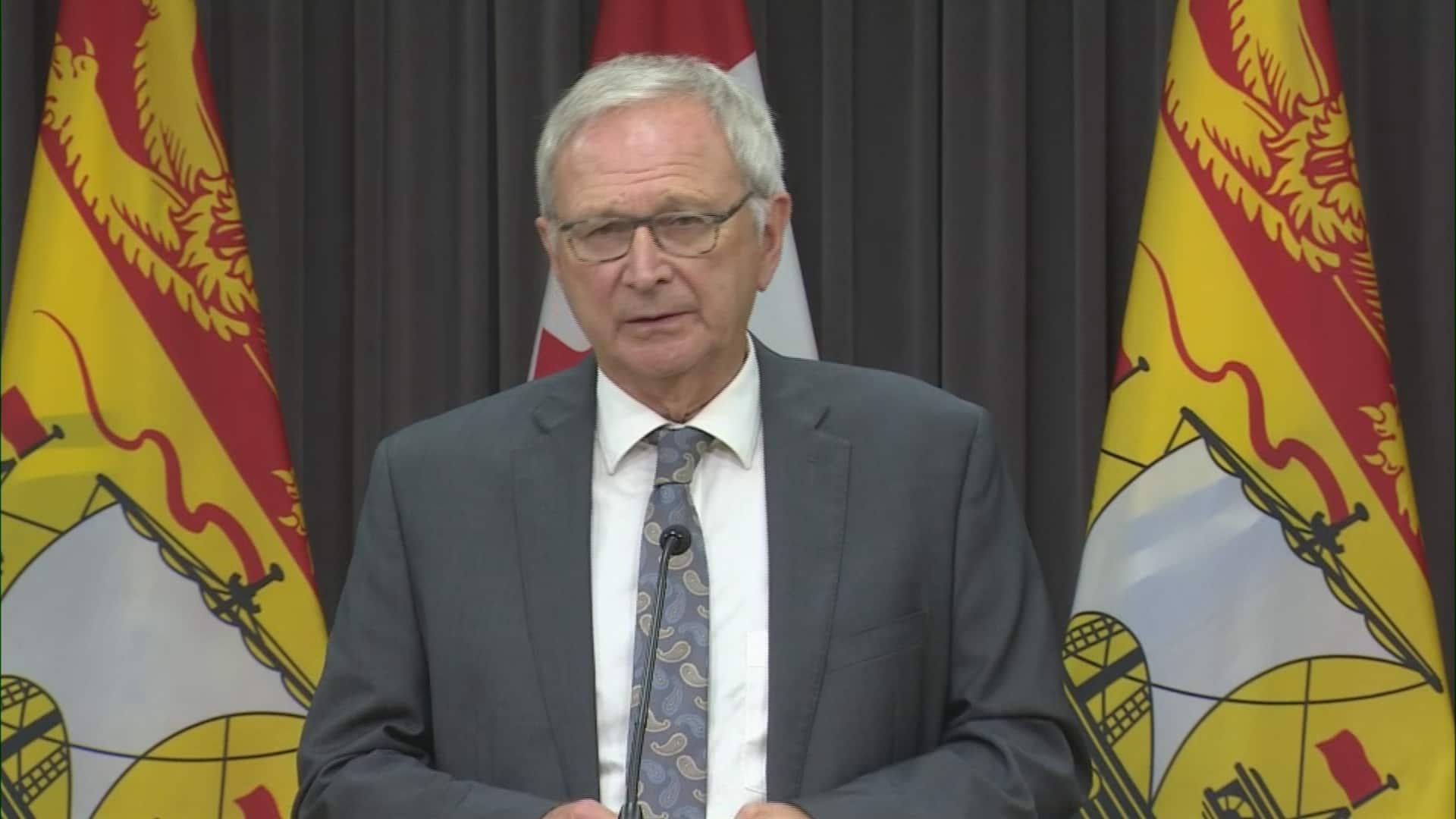 Decision about mandatory masks will be made Thursday, Higgs says

14 days ago
1:53
“What we learn during this outbreak will help us make better decisions to tighten rules,” Premier Blaine Higgs said during a news conference Wednesday. 1:53

She said that decision depends on whether there's a risk of community transmission or if they can't trace everyone's close contacts quickly.

The premier said a COVID cabinet committee will meet Thursday, when the Moncton outbreak and the possibility of provincewide mask requirements will be discussed.

Admissions and visits at Manoir Notre-Dame are suspended until further notice.

According to the facility's website, the home has residence rooms with two bedrooms and a shared bathroom as well as private rooms. It's not clear how many of the rooms have shared bathrooms.

No one from Notre-Dame responded to calls or requests for comment as staff entered and exited the building Wednesday. A representative of the New Brunswick Special Care Home Association did not return a request for comment.

The outbreak has led to a series of changes to visitor access at other care homes in the region, and at two local hospitals.

Vitalité Health Network said Wednesday it is temporarily suspending visits throughout the Dr. Georges-L.-Dumont University Hospital Centre as it moves to a higher internal alert level. It is also reducing elective surgeries and some ambulatory services.

Visits to the obstetric, pediatric and palliative care units are restricted to one designated visitor per patient. Patients receiving a medically assisted death will be allowed two designated visitors, with one at a time, other than exceptional cases.

Horizon Health Network says no visitors will be allowed at the Moncton Hospital. There are some exceptions with the details available on Horizon's website.

There was far less activity outside Notre-Dame on Wednesday. A emergency command centre has been established. Staff were coming and going from the trailer but declined to comment. Calls to the home went unanswered.

At least 10 home oxygen kits were delivered to the home Wednesday morning, though it wasn't clear why.

Anne-Marie Johnson says she feared there would be new cases at the home where her mother lives. Johnson's 89-year-old mother, Huguette, is one of 112 residents of Manoir Notre-Dame.

Based on what she considered lax entrance procedures at the home, Johnson said she fully expected more cases at Manoir Notre-Dame.

When she and her sister visited the home two weeks ago, they wore masks and had their temperature checked in the lobby, but no screening questions were asked. She also said her sister and brother-in-law, who visited on Sunday, were not contacted on Tuesday as part of the contact-tracing process.

Johnson says she has tried to reassure her mother that everything will be OK.

"I can't show her how scared I am," Johnson told Information Morning Fredericton.

"I'm definitely sure I'm not the only person rattled this morning."

She said she doesn't feel comfortable leaving her mother at Manoir Notre-Dame.

She planned to contact the Department of Social Development on Wednesday and ask about removing her mother from the special care home.

She said the home was short-staffed before the pandemic hit, "but for us, that was the only home we could afford."

Johnson said her mother told her that all residents of the facility were on lockdown in their rooms.

On Wednesday evening, Johnson said she still hasn't heard the results of her mother's test.

Jodi Hall, executive director of the New Brunswick Association of Nursing Homes, said her organization doesn't represent Notre-Dame since it's not a nursing home. However, she said nursing homes are taking a closer look at their visitor rules.

Hall said she's spoken with nursing homes in the region and hasn't found any that shared employees with Notre-Dame.

The cases at the home bring the total number of cases in New Brunswick since March to 222. Two people, both residents of Manoir de la Vallée, a special care home in the Campbellton region, died in June.

There are now 20 active cases in the Moncton region and two in the Saint John region.

With files from Information Morning Moncton and Mia Urquhart