A northern lumber mill is slated to close on Friday and political leaders are calling on the Alward government to find a solution to keep the 110 workers in Miramichi on the job. 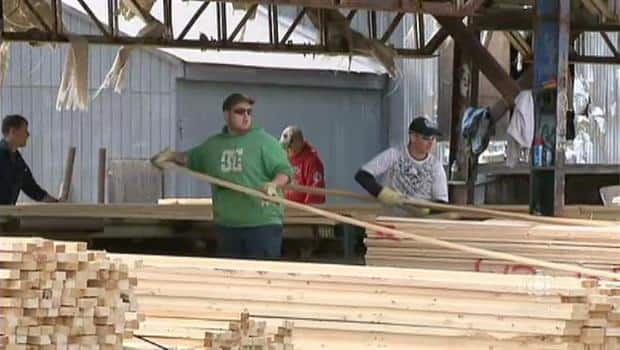 7 years agoVideo
1:24
A provincial cabinet minister is vowing a fix is on the way for Miramichi Lumber Products Inc. mill that is scheduled to close on Friday and push 110 people out of work in the northern city 1:24

A northern lumber mill is slated to close on Friday and political leaders are calling on the Alward government to find a solution to keep the 110 workers in Miramichi on the job.

Miramichi Lumber Products Inc. announced last week it will close on Friday because it can't get enough Crown wood.

"The minister of natural resources went right to work on that, and he's giving me support on this here, and I think that opportunity's going to be realized," Trevors said.

However, Northrup was not available on Wednesday to explain what options the Alward government had to help the mill keep its doors open.

It was the third straight day that Northrup did not speak publicly about the situation at Miramichi Lumber.

"Friday is the day that the employees are supposed to be finished work and we need to find a solution to this problem really fast," he said.

Miramichi Lumber executives have said the company has only been able to secure 40 per cent of its allocation of Crown wood.

That prompted an immediate denial from Mary Keith, the vice-president of communications for J.D. Irving Ltd., who said the company’s allegations were "absolutely false."

Miramichi city council passed a motion on Monday, asking for an emergency meeting to discuss the mill’s future with the various companies and the provincial government.

Fraser steered clear of the public spat between Miramichi Lumber, Irving and Fornebu.

He said the war of words between the three companies is another reason why the natural resources minister needs to agree to an emergency public meeting in Miramichi.

"That's why it's so important to have this meeting, so that everybody has all the facts."

New Brunswick’s other political leaders are also calling for swift political action from the Alward government.

After five days of silence, NDP Leader Dominic Cardy said it’s time for Northrup to speak out on an uncertain future for the Miramichi Lumber workers.

"So let’s be more transparent, let’s have a public discussion on this, let’s modernize this industry," he said.

"It’s not complicated. The premier could solve this problem with the snap of his fingers by simply by enforcing the regulations — the timber utilization regulations — and that would bring the wood from Crown land that mill requires to stay open," he said.

A retired senior civil servant said in an interview on Wednesday it's time for New Brunswick to take back control of its Crown-owned forest.

He said the provincial government is losing up to $20 million a year in royalties while the industry retains management and operational control of nearly three million hectares of Crown land.

McCrea said the provincial government gave up its control of the forest resource when the Crown Land and Forests Act was changed back in 1982.

Now McCrea said too many forestry decisions are politically motivated.

"Where the government is falling down, in my opinion, is the system has become so politicized that I think that the decisions are made from an entirely different perspective than fact," he said.

The retired bureaucrat said it isn’t just the Alward government that has been put in a tough position by the province’s forest companies.

"I think they're being held at ransom."