The former Miramichi Lumber Products mill in Miramichi has been destroyed by an overnight fire that broke out just a few hours after a possibly suspicious fire on the same property.

The former Miramichi Lumber Products mill in Miramichi has been destroyed by an overnight fire that broke out just a few hours after a possibly suspicious fire on the same property.

Tony Lloyd, fire chief of the Miramichi Fire Department, said the fire that demolished the mill started around 9 p.m. Monday. It took firefighters four hours to put that fire out.

"There were quite a lot of nooks and crannies in it, so we were there for quite a while," he said.

The first fire broke out around 6:30 p.m. behind the building, but firefighters were able to quickly put the fire out.

Lloyd said the first fire could have been suspicious.

"When the call came in, there was smoke in that area … someone had run from that area, and we just don't know who," he said. 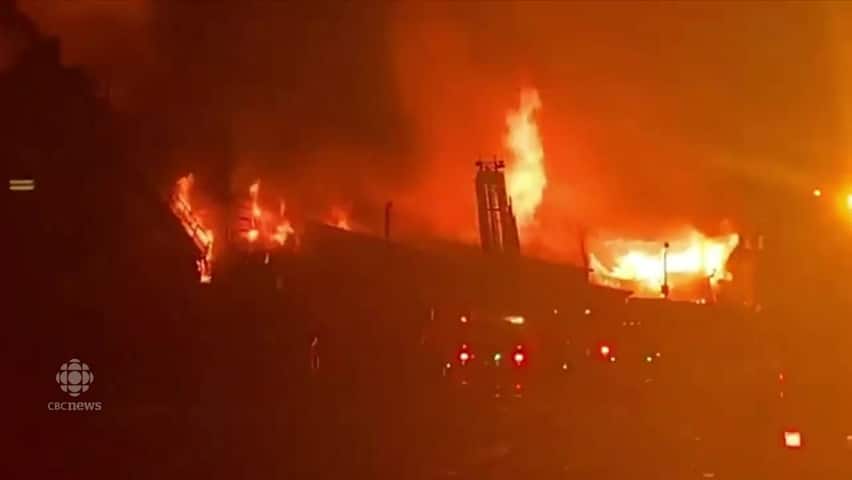 "When the call came in yesterday evening, the building was totally involved," Lloyd said.

Videos and photos on social media revealed firefighters battling the giant flames. Thirty firefighters were at the scene, and there were no injuries.

Nearby homes did not have to be evacuated because firefighters were able to keep the fire from spreading.

"We lucked out," he said. "The wind was in the right direction."

Lloyd said fire crews cleared away heavy equipment in the area Tuesday morning and were eliminating any hot spots that were left.

"I know there [are] onlookers, but we'd like for the area to stay clear so that we can get our work done," he said.

The Sunny Corner Fire Department also responded to the fire.

At one point, Lloyd said, he had to call extra police to provide traffic control. At that time, the Miramichi police closed Jane Street and rerouted traffic.

"It was a bottleneck down there and we were trying to move trucks around," he said.

The street has since been reopened to traffic.

Lloyd said firefighters still aren't sure what caused the fire. The Fire Marshal's Office is investigating.

Lloyd also responded to that fire.