Mi'kmaw comic writer Brandon Mitchell chose the Listuguj salmon raids of 1981 for the story he contributed to the graphic novel anthology This Place: 150 Years Retold, a collection of stories by Indigenous writers.

For the anthology, 10 Indigenous authors were each asked to write about a specific time in history since Confederation.

Mitchell's story, Migwite'tmeg: We Remember, is his take on the police raids that happened in 1980 and '81 in his home community on the Quebec side of the Restigouche River.

Mitchell was only a year old in 1981 and didn't hear much about the raids that year until he was older. Many people from other First Nations communities would tell him their stories of going to Listuguj to offer support during the raids.

This Place moves through 150 years of history chronologically, starting in 1868 with Annie of Red River, about Annie Bannatyne, a Métis-Saulteaux woman who horsewhips Charles Mair after he made inflammatory remarks in the Toronto Globe about Métis women.

When Mitchell, who now lives in Fredericton, was approached to take part in the anthology, he knew what period he would write about.

"I was contacted two years ago, and they told me about the project, and I was immediately, like, 'Yes, just don't even tell me the rest,'" Mitchell said. 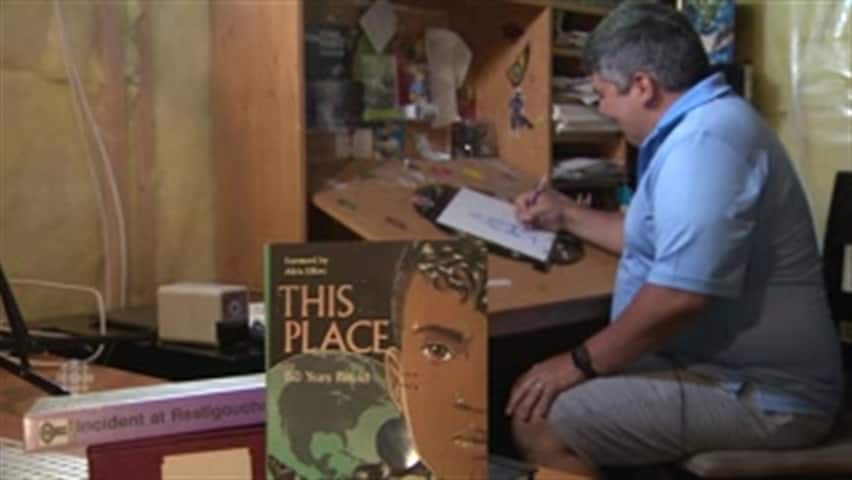 1 year ago
1:00
This Mi'kmaq comic writer chose the Listuguj salmon raids of 1981 for the story he contributed to This Place: 150 Years Retold, a collection of stories by Indigenous writers. Wolastoqi illustrator Tara Audibert drew the comics for Mitchel's story. 1:00

Raided in middle of the night

Without any hesitation, he asked for the 1980s.

"This is an opportunity to write about the raids that happened in 1981."

On June 11, 1981, and again on June 20, the Quebec provincial police conducted two raids on the Listuguj reserve.

Arriving in boats in the middle of the night, police and fisheries officers cut fishing nets and seized salmon, violating the Mi'kmaq people's Peace and Friendship Treaty rights to fish salmon, a traditional food source for the nation.

The raids were the subject of Incident at Restigouche, a documentary by Abenaki filmmaker Alanis Obomsawin, whom  Mitchell cites as a source of inspiration and a cornerstone of Indigenous storytelling.

"Of course, everyone knows about Alanis Obomsawin's documentary on it, and I wanted to do something different," Mitchell said. "I knew that there were more stories."

Mitchell turned to oral history, learning from his mother-in-law that salmon raids also happened in 1980. He had been telling her about his plan to write about the 1981 raids for This Place: 150 Years Retold.

"She just she stopped and she was, like, 'You got to write about the first raid,'" Mitchell recalled.

He decided to use the raid remembered by his mother-in-law as the launching point for his story.

Migwite'tmeg: We Remember then follows the story of a young Mi'kmaw boy who helps his father with fishing salmon during the salmon run in Listuguj every year.

When he finished writing, Mitchell turned the material over to Wolastoqi illustrator Tara Audibert, "a phenomenal artist," he said.

"We've worked together on several projects before and she just knows how to interpret my words."

Will use story in school

Mitchell plans to use This Place as an educational tool at Devon Middle School in Fredericton, where he teaches, and hopes to see it used in schools across the country.

Mi'kmaw language is woven throughout Mitchell's story with English translation, teaching the reader words such as plamu (salmon) and ta'liag (what's going on?). Lessons on the Peace and Friendship Treaties are also written into the story.

"It's a great accessible tool because I do touch on Peace and Friendship Treaties, which is something that there is a real push for — greater understanding " Mitchell said. "This is a Maritime story, right? Like this is a really great opportunity to show how close we really are and kind of bridge that gap."

Mitchell said the anthology is important because it is making people aware of Indigenous authors and Indigenous talent.

Some of the stories have been told before, 'but not through an Indigenous lens, so this an opportunity for us to share and tell our stories."

Catherine Gerbasi of HighWater Press said the anthology project came about after the publisher was chosen for a Canada Council grant from more than 2,000 applicants around the time the country was marking Canada 150.

"The idea of celebrating an anniversary that had so many negative connotations for First Nations, Métis and Inuit peoples, it just didn't seem appropriate" Gerbasi said. "But after talking with some of our writers we thought 'Wouldn't it be a fantastic idea to create a graphic novel retelling the history of Canada from an Indigenous perspective?'

"We didn't even want to use Canada in the title and over time came up with the title This Place: 150 Years Retold."

From there, the idea emerged of a graphic novel anthology by writers and artists from all different regions of the country.

"Brandon was a new writer that we reached out to," Gerbasi said. "We wanted to have writers represented from all across Canada, from you know, the North, the South, the East and the West."

Gerbasi said HighWater Press, an imprint of Portage & Main Press, specializes in graphic novels, which many consider to be an alternative form of literature. Since This Place is an alternative view of the country's history the medium seemed appropriate.

Many of the writers of This Place, including Mitchell, relied on oral history from their communities for their stories.

"Our elders, they're so filled with so many vibrant stories," he said. "The books or the pictures don't even do it justice."

"Oral history cannot be dismissed and it needs to be recognized and respected for what it is."

"It's using the tradition and tools of First Nations communities to tell history, period."

This Place: 150 Years Retold is available in stores now.