The recent anniversary of the wreck of the cargo ship Manes P in Saint John brought back a lot of memories for people in the city.

Manes P ran aground in 1970, but scavengers and nature haven't washed it away yet

Connell Smith · CBC News · Posted: Jul 02, 2020 9:00 AM AT | Last Updated: July 2
The recent anniversary of the wreck of the cargo ship Manes P in Saint John brought back a lot of memories for people in the city.

It has also created renewed interest in the wreck site itself, interest that has now resulted in images never before of the remains of the ship's hull.

She had been riding out a severe winter storm in the city's outer harbour when her anchor began to drag across the sea floor.

The crew was unable to stop the 450-foot (135-metre) ship from smashing into the rocks of the Partridge Island breakwater.

No one was injured, but the ship was lost, and much of it was later cut up for scrap metal.
All that can be seen today are a few random pieces of rusted metal at low tide.

But a pair of amateur shipwreck sleuths wanted to find out if more could be found with help from a drone equipped with a high-resolution camera.

"The thing about drones is you're putting a camera where one's never been before," said Jim Turnbull, a professional drone operator. "And I just thought that if there's anything there to be seen, I'm going to see it."

The idea, said Turnbull, came from his friend Andy Castonquay, a retired transportation manager who had worked on merchant ships as a young man and is now a regular contributor to the online community, shipspotting.com.

The website is home to millions of photographs and other information put up mainly by retired seafarers around the world.

Castonguay has more than 10,000 photos on the site — mainly of ships visiting Saint John.

Shipspotting already carried several photos of the Manes P taken in locations around the world under its earlier name, the Escalante. 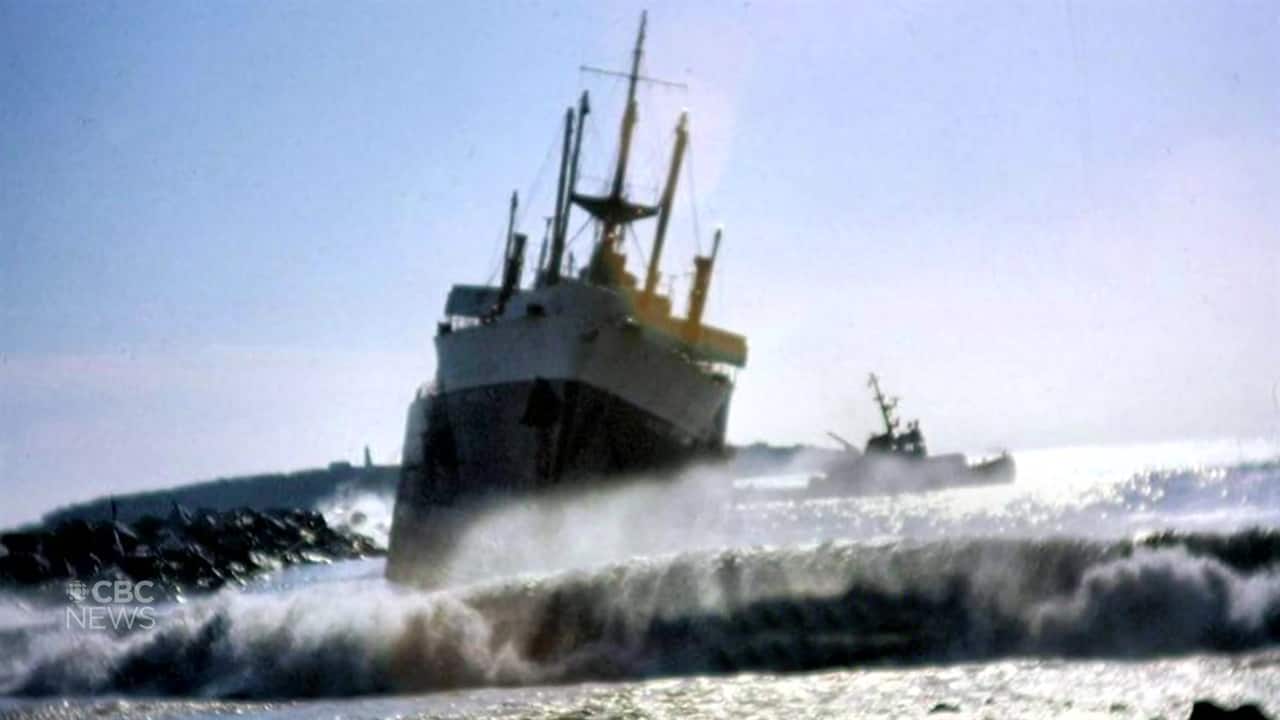 10 months agoVideo
1:53
When Foster Hammond heard a ship had run into the Partridge Island breakwater, he went down to see it and got inside. 1:53
A good photo of the wreck would bring things full circle.

"It was a lovely ship," said Castonquay. "It was a great old-afashioned freighter in its heyday."

"All the historical research from the day said that the ship had been picked pretty clean, there wasn't much left," said Turnbull. "I thought I might see some steel, some rusty pieces here and there."

Conditions for the endeavour would have to be perfect.

Even at the lowest tides of the month, most of the wreck site is underwater.

To get good images, there could be no wind or real waves, and the water would have to be clear, the light bright.

Turnbull manoeuvred his drone over the wreck site, hovering at 135 feet. A series of broken lines and regularly spaced dots showed up on his controller screen. They were just beneath the water's surface.

It was clearly the outline of a ship.

"I was pretty shocked at what's still there," he said. "Considering the power of these tides and considering everything that nature can throw at it for 50 years, and it's still there."

Both men were elated.

"Looks like skeletal remains," said Castonquay. "You can see the ribbing of some of the lower portions of the hull, presumably from near the bow to near the stern end."

The photo is now on the Shipspotting site under the category "Wrecks and Relics," along with some shots taken at ground level by Castonquay.

"Jim's photo got more hits than mine," he said.

Turnbull says he'd now like to use the drone's unique perspective to find other wreck sites along the Bay of Fundy coast.

Connell Smith is a reporter with CBC in Saint John. He can be reached at 632-7726 Connell.smith@cbc.ca