A United States company is harnessing the power of the tides in waters off the coast of Eastport, Me., to generate electricity. 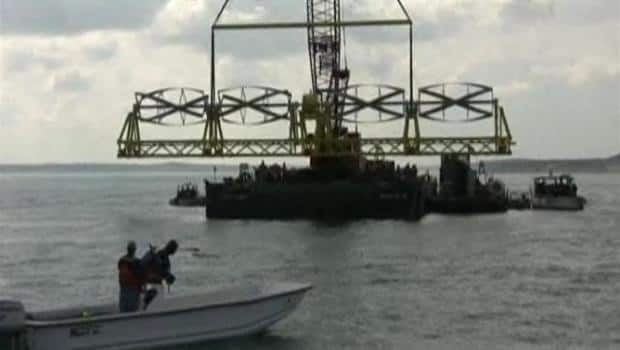 8 years ago
2:27
A United States company is using tidal power in waters off the coast of Eastport, Me., to generate electricity. 2:27

A United States company is harnessing the power of the tides in waters off the coast of Eastport, Me., to generate electricity.

For years, Nova Scotia and New Brunswick have debated the virtues and practicality of tidal power. But Ocean Renewable Power in Maine claims it is now the first company in the western hemisphere to use tidal power to generate electricity.

The company has created a modular design, which allows additional units to be attached in the future to create a wall of generators.

The company wanted the simplest generator possible when it began its ocean power initiative.

The generating unit is suspended underwater off the coast of Eastport and is not a hazard to navigation in the area.

The company is now operating in what it calls the commercial phase.

Bob Lewis, the director of operations for Ocean Renewable Power, said there is clearly some way to go for tidal energy.

But Lewis said the company is strategically locating the generators in the ocean to maximize the power of the tides.

"We do not need to reposition the device because the foils are designed in such a way that we'll operate in one orientation whether the tides coming or going," he said.

This generator can power roughly 25 to 30 homes and that's in Maine where electric power is rarely used for heating.

Lewis said the company will launch two more generators in Eastport next summer.

And while there are no immediate plans for New Brunswick to leap back into the tidal power business, the company is working with a Nova Scotia developer to examine the feasibility of generating power in Digby Neck.

A few years ago, there a lot was of attention being paid to the potential for tidal energy in New Brunswick. The provincial government hired consultants to isolate sections of the Bay of Fundy where tidal power had the most potential.

The Department of Natural Resources leased a section of underwater rights to Irving Oil Ltd. to move forward with a tidal power project. The company committed to spend $600,000 to study tidal power in the area.

But Irving Oil backed away from the project in 2010. A company spokesperson cited uncertainty around the true viability of tidal technology as the reason for the decision to halt its project.

Irving Oil had partnered with the Huntsman Marine Science Centre in St. Andrews on the tidal power initiative.

The concept of using the powerful tides of the Bay of Fundy to generate power has been a goal of politicians in the region for decades.

Helen Kennedy, a member of the Border Historical Society, has concrete proof of the region’s long dream of tidal power.

She shows off a cement model built in the 1930s to demonstrate a massive tidal energy project supported by former U.S. president Franklin D. Roosevelt to use a series of dams encompassing much of Passamaquoddy Bay, including Campobello and Deer islands, to create a generating station.

Roosevelt’s plan for tidal power in the region was eventually abandoned for several decades.