Inside the spellbinding world of Saint John's Magic Circle

It's a haven for sleight-of-hand artists, ventriloquists, jugglers, mind-readers, and other practitioners of unusual feats and magical effects.

The former Carnegie library in Saint John is a pretty ideal place for a magicians meeting.

It certainly has the right ambience: a 115-year-old, brick, Beaux-Arts-style building with a stained-glass skylight and mosaic floors.

Every month the Saint John Arts Centre hosts the Magic Circle of Saint John — a haven for sleight-of-hand artists, ventriloquists, jugglers, mind-readers, and other practitioners of unusual feats and magical effects. 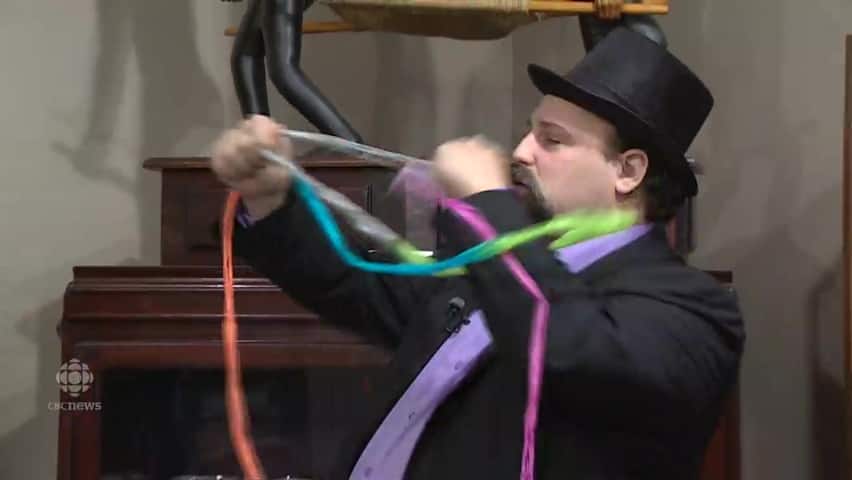 Magic tricks from some of Saint John's finest magicians

2 years agoVideo
1:04
The Magic Circle of Saint John is a haven for sleight-of-hand artists, ventriloquists, jugglers, mind-readers, and other practitioners of unusual feats and magical effects. 1:04

The club encourages aspiring magicians to develop their skills and "think out of the box," said club president Tabraze Sheikh, a self-professed fan of "puzzles, hard-to-answer questions, and mystery."

Sheikh and his wife, Robin, bill themselves as the "Modern Mind Readers" — with an entire stage show that centres on "the power of the mind and intuition."

Since becoming club president last year, Sheikh said, he is "hoping to grow the membership."

"We want people who really love magic and the allied arts — juggling, ventriloquism, anything like that."

On Saturday, Jan. 26, at 1:30 p.m., the club will host its first annual magic show at the Saint John Arts Centre. Admission is by donation.

Over 3 decades of magic

The Magic Circle was founded in 1988 by Bernard Cormier, also known as Bernard the Magician.

Membership has ebbed and flowed from as many as 30 members, to almost none for a brief period in the late nineties.

Currently, the club consists of Scot Dejong, Kurt Fuerniss (Mr. Zapz), Nathan Armstrong, Cormier, Sawyer Stanley, and the Sheikhs — all of whom practise different forms of illusion, from card tricks and mind-reading to sleight-of-hand and balloon sculptures.

Fuerniss — an award-winning balloon artist and family entertainer who has travelled across North America performing for 27 years — joined the club as a boy of 13.

"The club is an amazing resource," he said. "We get to practise in front of our peers, get pointers, explain things, and we don't have to worry about the secrets."

According to Scot Dejong, whose stage magic usually involves "cards, silks, coins, and a little bit of mind-reading," his illusions let audiences recapture a sense of childlike wonder.

"Magic helps us think that there's something special in this world, something that we can't explain," he said. "I want to share that with that audience.

"I'm hoping that many people will join our organization and be part of the Magic Circle."

The first: a magician never reveals his or her tricks.

Audience members "might consider asking you questions about how you did this, or how you did that, but you are not supposed to reveal the secret," Cormier said.

Magic helps us think that there's something special in this world, something that we can't explain. I want to share that with that audience.- Scot Dejong, stage magician

"Some people try to analyze everything that you do, ... We laugh sometimes, because they come up with the weirdest ideas of how we do things," he said.

"If they really knew the secret, they would say, 'Why didn't I think of that? It's so simple.'"

"We are all at the learning phase at all times," said Cormier, who described magic an "escape from the routine of daily life, and the terrible news we hear every day.

"That's what magic is all about."