Six years after a bold decision to walk away from her civil service job, Wendy McLeod MacKnight's writing career is starting to take off. Her latest book, The Frame-Up, is set in the Beaverbrook Art Gallery in Fredericton.

Wendy McLeod MacKnight was 50 years old and a senior civil servant in the David Alward government when she made the bold decision to leave her job.

Six years and a lot of hard work later, she's starting to see some success as a children's author.

"It's been an amazing ride so far," McLeod MacKnight said during an interview at her home in Hanwell, southwest of Fredericton.

Her latest book, The Frame-Up, was published by Harper Collins in June 2018. 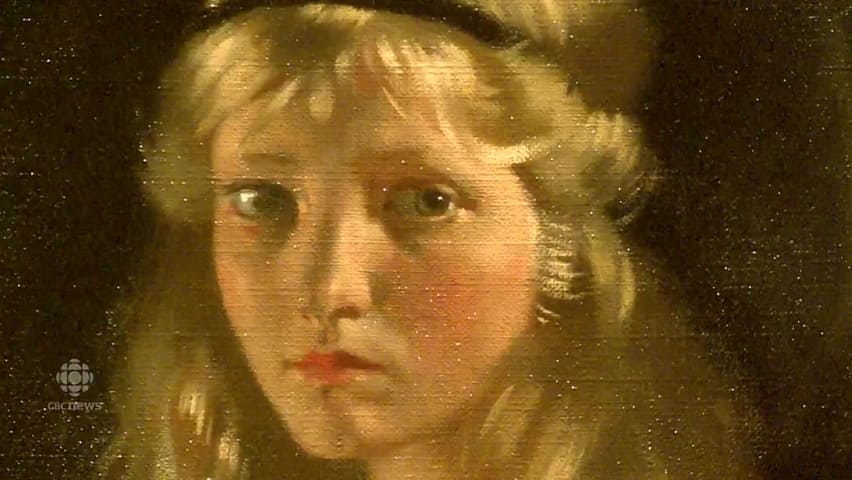 Wendy McLeod MacKnight's, The Frame-Up, was published by Harper Collins in June 2018

2 years agoVideo
1:00
Wendy McLeod MacKnight was 50 years old and a senior civil servant in the David Alward government when she made the bold decision to leave her job. 1:00

"The book is being sold all over North America," she said, while declining to discuss sales figures. "It's doing very well."

It comes out in paperback this June and is being translated into Taiwanese.

The author has been speaking with classes all over the world that are reading The Frame-Up.

She considers it an honour when teachers ask her to give special tours of the Beaverbrook Art Gallery, where the book is set.

The story is based on the premise that all of the figures in original works of art are secretly alive.

Many of the characters in the book come from the Beaverbrook gallery's Masterworks exhibition.

The main character is Mona Dunn, real-life daughter of Sir James Dunn, whose portrait was painted by William Orpen in 1915, when she was 13.

"She's been stuck in a painting for a hundred years and she is bored out of her mind," said McLeod MacKnight.

"One day Mona sticks out her tongue at a couple of obnoxious visitors and Sargent sees it."

They begin a friendship that has massive ramifications for everybody in the gallery.

Among her inspirations, McLeod MacKnight counts Scooby Doo cartoons, Harry Potter and the paintings on the wall of her living room.

She's had good reviews from the likes of the Wall Street Journal, whose critic described The Frame-Up as "tantalizing," "delicious," "clever" and "satisfying," and from the really tough critics, like Grade 5 students from Wendy Peters's class at Geary Elementary School.

"I think the tour is amazing and I really like the book," said Evy McLaughlin.

The success is a bit of vindication for McLeod MacKnight after Canadian publishers took a pass on her story.

"They weren't sure that anybody would want to read about a gallery in Fredericton, New Brunswick."

The editors at Harper Collins, on the other hand, didn't have any such reservations.

"They were like, 'It just sounds like magic to us' … I think we often kind of downplay … where we're from."

Canadian publishers weren't the only ones to turn her away as she tried to break onto the literary scene with her first book, It's a Mystery, Pig Face!

She spent a whole year revising and rewriting, while being rejected by literary agents 49 times.

"It takes a lot of tenacity and every single time it does hurt your feelings," McLeod MacKnight said. "I just kept thinking, 'No, I don't need 100 people to love it. I only need one person to love it.'"

She was prepared to pitch that book as many as 72 times if she had to. And even if it came to that, she wasn't going to give up on her dream. She'd just come up with a different story.

"I was all in. I had decided this was what I was going to do, so I was going out with a blaze of glory."

McLeod MacKnight said she thinks a lot of people give up way too soon.

I want kids in New Brunswick to know that if they are willing to work very very hard, their stories are as interesting as anybody else's stories in the world.-Wendy McLeod MacKnight

But for her, there was no going back to her old life as deputy minister of education. She closed that chapter shortly after the death of her father in late 2012.

"I was sitting in the nursing home with him as he was dying and literally my BlackBerry was just going crazy," she said.

"I liked serving the people of New Brunswick, but I thought, OK, there's something out of whack here."

She looked at her father and thought about how quickly time had passed since his 50th birthday.

She'd dreamed of being a writer since she was about five years old.

"If I didn't do it now, I was going to someday be in that bed thinking, 'Well, I had a chance to do something.'"

She returned to work after the Christmas holidays and gave notice.

"You can imagine the reaction when you tell people you're going to leave a good paying job for one where you have no idea if you'll have any success."

She used to believe people when they told her she couldn't make a living as an author.

"Now, what I tell kids and others is if you're willing to work hard, and to be rejected, you can do it."

She cried when she found out Harper Collins was interested in The Frame-Up.

As a child dreaming of being a writer, she imagined herself as the central character and aspiring writer in Little Women.

"I always had the Jo March thing, which is I would be carrying a brown paper package to a publisher in New York City."

"I am really fortunate. Most people don't get published. Most people, they have these dreams and they don't chase them. If the worst thing that could ever happen is I only got three books published and two of them were from Harper Collins, I'm going to be happy."

She made a deal with Harper Collins for two books. The second, due out next March, is also of the magical realism genre. The Copy Cat is about a shape-shifter and set in Saint John.

"I want kids in New Brunswick to know that if they are willing to work very very hard, their stories are as interesting as anybody else's stories in the world.

"If somebody stops in New Brunswick on the way to go see Anne of Green Gables then my work is done."

Listen to Wendy McLeod MacKnight talk about why she walked away from a top job in the civil service to become a children's author.