Lieutenant-governor remembered as 'trailblazer' after death from cancer

New Brunswick Lt.-Gov. Jocelyne Roy Vienneau is being fondly remembered as an inspirational "trailblazer" and passionate advocate, who championed the need for "new sense of pride" in the province.

New Brunswick Lt.-Gov. Jocelyne Roy Vienneau is being fondly remembered as an inspirational "trailblazer" and passionate advocate, who championed the need for "new sense of pride" in the province.

Roy Vienneau, 63, has died after a battle with cancer, the province announced on Friday.

In a statement, the province said official events at Government House in Fredericton are cancelled until further notice.

The Canada flag at the Peace Tower in Ottawa has been lowered to half-mast and will remain there until her funeral.

Funeral details will be made available in the coming days by the provincial Protocol Office.

Premier Blaine Higgs said he expects the service will be in a week and a half. Roy Vienneau is entitled to a state funeral, but it will be up to her family, he said.

The federal government has offered to help "in any way, shape or form," he said.

She made the announcement at the Fredericton Run for the Cure, an annual fundraising and awareness event for cancer charities. 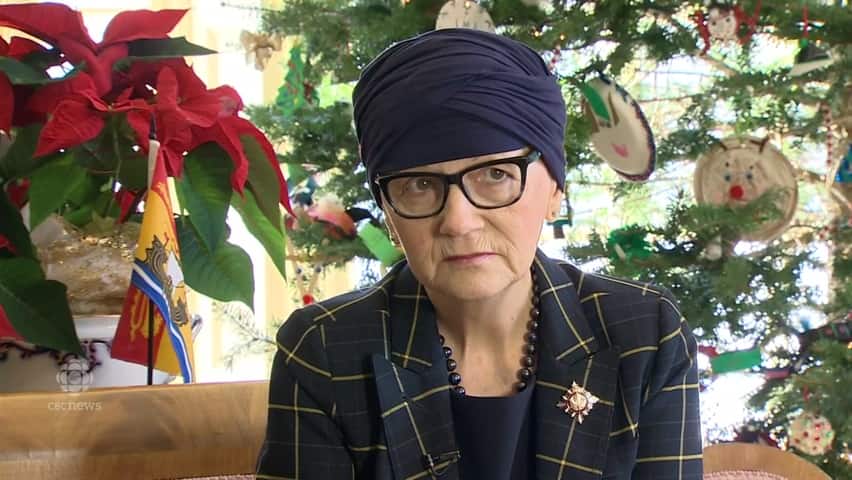 1 year ago
1:43
Lt.-Gov. Jocelyne Roy Vienneau, whose death was announced Friday, sat down in December 2018 for an interview with Harry Forestell, discussing her pivotal role after the provincial election and her willingness to continue on in the role, despite her illness. 1:43

At the time, she said she was cancer-free but was undergoing chemotherapy as a preventive measure. She'd been diagnosed in spring 2018.

The only outward sign of her treatment was a selection of stylish, close-fitting hats that Roy Vienneau wore to cover the loss of hair. The chemo treatments ended before Christmas, and she was expected to do a round of radiation therapy this year.

Just before she made her disease public, her role as lieutenant-governor thrust Roy Vienneau into daily news coverage because of the close results of the September provincial election.

Former Liberal premier Brian Gallant and Higgs, as Progressive Conservative leader, both had to pay her visits at Government House after neither party won a majority of seats. After Gallant tried and failed to win the confidence of the legislature, his government resigned to Roy Vienneau and she invited Higgs to form a new government.

'An honour to our province'

Roy Vienneau's steadfast leadership during the historic election and transition period provided stability in the province, underlining the importance of the position, said Higgs.

"She was very careful to weigh out the rules and the process and how it should unfold and ensure that democracy was upheld and that the system worked as it was supposed to," he said.

Higgs, who spoke to Roy Vienneau just last week, described her as strong, calm and genuine. She was a passionate advocate for the province throughout her career, he said.

As lieutenant-governor she championed literacy, mental health issues, and "the need for a new sense of pride for the place we call home."

Roy Vienneau took on more than 1,000 events during her tenure, "earning the admiration and affection of people across the province," Higgs said.

"She was so proud of the diversity we have in our province and exuded that in every conversation. And she did until the very end."

"She was an honour to the role and an honour to our province" and will be missed by everyone whose life she touched.

What it means to be 'a New Brunswicker'

"She set a wonderful example … for what it means to be a New Brunswicker," he said.

"The incredible pace that she kept up with events across the province, celebrating the very best of our province. I think that's something we'll all remember."

Marilyn Trenholme Counsell, a former lieutenant-governor, said Roy Vienneau was an inspiration to people across the province.

"She was so genuine about the things that meant most to her and I think she, from my very first meeting with her, I felt that she wanted us to be our best personal selves — that we could reach higher."

New Brunswick Liberal Leader Kevin Vickers said Roy Vienneau's passion for her province and its people "shone through as she carried out her responsibilities," earning her the "admiration and respect of all New Brunswickers."

"Her commitment and dedication to our province was unwavering," he said, "even in the face of her illness."

'A model for Acadian women'

Bathurst Mayor Paolo Fongemie, who worked with Roy Vienneau at the New Brunswick community college for 23 years and owned a cottage next door to hers, said he always knew she was just a phone call away.

"She was generous with her time, she was very generous with people, close by, and we'll miss her, but her legacy will never be forgotten."

The New Brunswick Acadian Society said it was saddened by the death.

"Mrs. Roy Vienneau was a model for all Acadian women," said a statement issued in French. "She did honour to our people by inspiring a generation of young people to surpass themselves."

A history of achievements

Roy Vienneau, the first Acadian woman to hold the job of Queen's representative in New Brunswick, the "LG" as she was known by staff, had a long list of achievements.

A native of Robertville, she was one of the first women to earn a degree in engineering at the University of Moncton.

She was vice-president of the university's Shippagan campus, held a variety of positions at the Bathurst campus of the New Brunswick Community College and served as the province's assistant deputy minister for post-secondary education.

Appointed by the Governor-General at the request of former prime minister Stephen Harper, her term would have ended in September 2019, unless Prime Minister Justin Trudeau asked her to stay for another five-year term.

The prime minister offered his condolences in a statement, describing her as a "trailblazer in New Brunswick's post-secondary education system."

"She was the first woman to direct a francophone community college in New Brunswick, the first woman to occupy a secular position as vice-president of a campus at the Université de Moncton, and one of the first women to graduate from the university's Faculty of Engineering," Trudeau said.

Would have stayed on

During a year-end interview with CBC News in 2018, Roy Vienneau said she wanted to stay.

​"Yes, I would. I would like to serve the people of New Brunswick, but I would also like to spend more time with my grandchildren," she said.

"I'm doing more short-term [planning] instead of long time plans. Of course, I still have longtime plans. I will always. As long as I live I will.

Roy Vienneau is survived by her husband Ronald and her children Isabelle and Cédric.

With files from Harry Forestell, Jacques Poitras and Tori Weldon