Kyle Springer pleaded guilty to a criminal charge of cruelty to animals in Woodstock, N.B., provincial court on Tuesday. He faces jail time for leaving his dog to starve to death in a locked home over the course of two months.

Kyle Springer, 27, was arrested after returning home from Alberta for the holidays

A 27-year-old New Brunswick man will be sentenced in the spring for leaving his dog to starve to death in a locked home over the course of two months.

Kyle Springer pleaded guilty to a criminal charge of cruelty to animals in Woodstock, N.B., provincial court on Tuesday.

The facts of the matter weren't discussed in court, but CBC News was able to verify details of the case with the people who discovered the remains of dog, named Diesel.

Springer's landlords discovered Diesel in 2015 while attempting to collect overdue rent. His landlords said Springer did not give them any notice he was leaving the Woodstock-area rental home, with his dog locked inside without food.

According to Erin McCormick, the daughter of the landlord, the dog's death was due to pure neglect.

"We had multiple people, numerous of his friends, come to us and tell us that they had asked him about the dog," she said.

"So, I mean he was directly across the river within five minutes away. He very easily could have checked in." 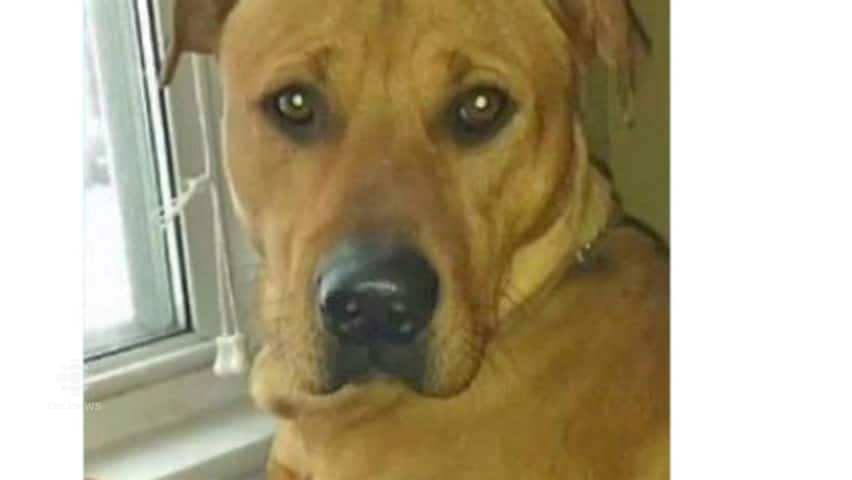 2 years agoVideo
1:07
Diesel died of starvation after being left alone in an apartment for more than two months. His owner Kyle Springer pleaded guilty in court on Tuesday. 1:07

Diesel is estimated to have died two or three days before the landlord entered the building.

The home appeared covered with scratch marks where the animal may have been trying to find food, a video taken by the property owners showed. The video captured the mess inside the home that was covered with the dog's urine and feces.

Court documents show Springer, who's from Hartland, N.B., failed to show up for a court appearance two years ago, and a warrant for his arrest was issued.

According to western New Brunswick Crime Stoppers, Springer had moved to Alberta but was arrested when he returned for the holidays following an anonymous tip.

Springer refused an interview with CBC News, but he snickered as he got into his vehicle after leaving court where a group of people came to protest the abuse to the dog.

Susan Henley of a Fredericton-based animal advocacy group made the hour-long trip west to show support for the deceased dog and to call for justice.

"People are absolutely horrified that anyone could be so callous, that they would lock a door, walk away, knowing that an animal is inside and has no way to get out," she said.

She said the group is hoping for a precedent-setting sentencing when Springer returns to court on April 9. He faces a fine not exceeding $10,000 or up to 18 months in prison, or a combination of both.

"We want jail time. Jail time is what people should get," she said.

The group has collected more than 44,000 signatures on a petition calling for the maximum penalty.

Henley said all too often perpetrators receive a small fine and a ban on owning animals — something, she said, is rarely enforced.

The activists also called on the public to speak up when they encounter animal abuse and push lawmakers toward stricter legislation.

"Everyone needs to play a part in protecting animals," said Lisa Paulin.

"Your voice is their voice."