New Brunswick, Ottawa differ on personal use of alcohol in talks

The federal government plans to talk about cross-border beer runs in upcoming internal-trade negotiations with the provinces, even though the New Brunswick government says the subject is off the table.

Federal government insists topic will be in negotiations even though N.B. says it's not due to court case 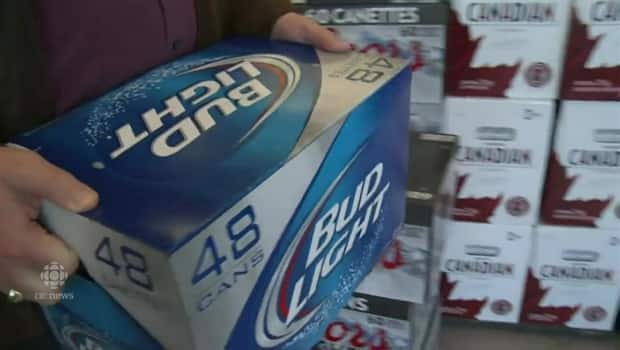 5 years ago
1:33
New Brunswick and Ottawa at odds over whether personal use beer included in trade talks. 1:33

The federal government plans to talk about cross-border beer runs in upcoming internal-trade negotiations with the provinces, even though the New Brunswick government says the subject is off the table.

We've always said we want it to be part of the discussions and that's what we announced on Friday.- Philip Proulx, spokesman for Economic Development

"We've always said we want it to be part of the discussions and that's what we announced on Friday."

That appears to contradict what New Brunswick's minister for trade said last Thursday.

Roger Melanson told reporters at the legislature that Ottawa and the provinces would not negotiate on alcohol restrictions for consumers because the province is appealing a recent court ruling on the issue.

"At this point we believe it's not appropriate," Melanson told reporters on Thursday.

The province is appealing the April acquittal of Gerard Comeau of Tracadie-Sheila on charges of violating the Liquor Control Act by buying 14 cases of beer and three bottles of liquor in Quebec and bringing them back to New Brunswick.

The judge ruled that the restrictions violated the 1867 Constitution Act's guarantee of open trade between the provinces. New Brunswick prosecutors are asking the New Brunswick Court of Appeal to overturn that decision.

In the meantime, Melanson said, "I think it's important that we respect that process … The beer issue is in front of the courts and so it's not being discussed at this time."

A day after Melanson appeared to rule out negotiations on cross-border shopping for alcohol, Bains released a statement saying Ottawa and all the provinces had agreed on "a process and timetable for liberalizing the responsible trade in and consumption of alcohol."

A spokesperson for Melanson said that was a reference to loosening restrictions for producers, not consumers, and "any reference to consumption means protection from minors consuming."

But Proulx says the reference includes consumers making trips to other provinces to buy alcohol and bring it home. "Yes," he said. "It's trade. It's covered by the process."

Proulx wouldn't comment on the apparent contradiction between Bains and Melanson, who are both Liberals whose governments co-operate. "I can't answer for the minister in New Brunswick on why he said that," Proulx said.

In the wake of April's Comeau ruling, Bains told the House of Commons in May that he hoped an upcoming "comprehensive" deal on loosening interprovincial trade barriers would address the issue of cross-border shopping for alcohol.

It's time for the Liberals to free the beer.- Dan Albas, Conservative MP

But the agreement announced Friday will amount to a separate two-year negotiation on alcohol. The comprehensive agreement that will cover issues like government contracting is expected to be finalized sooner.

British Columbia Conservative MP Dan Albas, who advocates free trade in alcohol between provinces, says separate talks on alcohol show that Bains was wrong to promise it would be covered by the main agreement.

Albas called again for the federal government to send the Comeau case directly to the Supreme Court of Canada. "It's time for the Liberals to free the beer," he said.